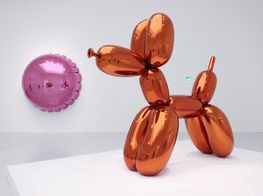 Koons sent letters to Larry Gagosian and David Zwirner on Friday announcing his departure from their galleries.

Pace Gallery announced on 27 April that it now represents Jeff Koons exclusively. Pace will exhibit a Koons sculpture at their Palo Alto gallery in 2022, and present a solo show in New York in 2023.

'Sometimes professionally in life we can find ourselves at a crossroads,' Koons said. 'Going through the last year or so and having the opportunity to reflect on what I would like to achieve with my life's work in order to bring it to its fullest potential, I have decided that a change in the environment in which my work is viewed and supported would be a positive thing at this time.'

A maestro of kitsch, Koons became the most expensive living artist when his one-metre-tall stainless steel 'inflatable' sculpture Rabbit (1986) sold at Christie's for $91.1 million.

'He perceived a cultural shift decades before any of us knew it was underway by propelling through the barrier of elitism that was ringfencing the art world,' said Marc Glimcher, CEO and President of Pace Gallery.

Koons was previously represented by Gagosian Gallery and David Zwirner.

'We have always respected Jeff's freedom; he really is a free agent,' said Zwirner.

Gagosian described the new partnership as 'a good fit', according to the New York Times.

When Pace opened its eight-storey mega gallery in 2019—at the same time Zwirner and Gagoisan were scaling up in New York—former gallerist Howard Read told the newspaper, 'they're all out to see who can represent Jeff Koons for the longest'.

Loeb is co-represented by Pace and Acquavella Galleries, New York. His inaugural solo show with Pace, Wishful Thinking, will run from 19 May to 2 July in Palo Alto. —[O]