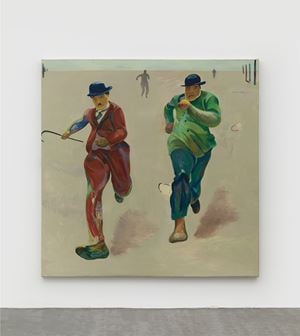 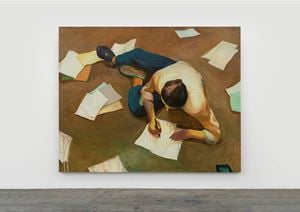 A Thousand Plateaus Art Space is pleased to launch Zhai Liang's solo exhibition Imaginary Comedy on 16 May 2020, as the first exhibition of this year. Zhai Liang has been cooperating with A Thousand Plateaus Art Space for about ten years and has always maintained the avant-garde spirit of exploration and unique personal style, through which he gradually grows into a high-profile cutting-edge artist.

Zhai Liang's work is famous for its fusion of pictorial representation and literalisation. His early series 'The Garden of Forking Paths' regarded the novel of Jorge Luis Borges' novels as the breakthrough point, transforming the stories and characters into visualised 'hypertext' and extending the observation of painting to the spatial narrative itself. Later, he entered a new progress of thinking and accumulation. In solo exhibition 'Slow', he simplified the narrative structures and strengthened the experiments of brush strokes and picture's textures, unfolding his own 'literature' in his unique way.

This solo exhibition will present Zhai Liang's latest works created since 2019. Imaginary Comedy maintains the creative style as that of exhibition The Garden of Forking Paths in which the literalisation and visualisation are fused. Starting with the surreal depiction of famous comedian Charlie Chaplin, the artist penetrates the comedy itself and the tragic core behind that, as well as the relationship among different actors, artists, philosophers and their historical backgrounds. Meanwhile, Zhai Liang keeps exploring into methodologies of painting and visual structures, thus the insightful painting language and speculative themes can be integrated. This makes his work visually pleasant while not lose its critical foundation.

Sign up to be among the first to know when new exhibitions by Zhai Liang or at A Thousand Plateaus Art Space open.