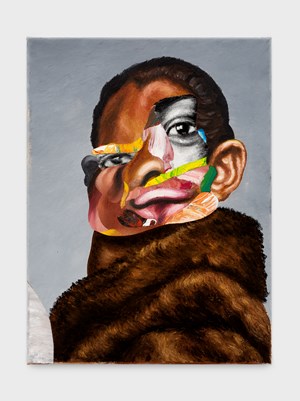 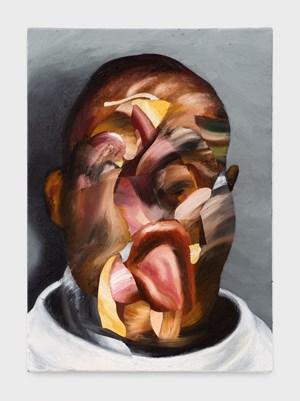 Five years ago, Nathaniel Mary Quinn spontaneously created a portrait of his brother Charles. It emerged unexpectedly on the canvas and it represented a dramatic departure from the more topical, politically-oriented work he had been doing up until that time. More importantly, it opened the door to Quinn's past and to the world with which he has continued to occupy himself, a world rooted in the people who have marked his extraordinary life. Quinn's story is by now well-known. It is a traumatic one involving growing up in Chicago's drug-ridden Robert Taylor Homes, being identified as a child of 'promise' and gaining admission to a prestigious boarding school, only to return home at age fifteen following his mother's death to find his father and four brothers gone. This tale is oft repeated in Quinn's press and with good reason. Indeed, his drawings and paintings commonly find their genesis in individuals from the artist's life, and his exhibitions tend to take a specific group of people as their focus: residents of the Robert Taylor Homes in his exhibition Back and Forth in Chicago in 2015; his mother and himself in On that Faithful Day in New York in 2017; and, most recently, individuals from his current neighbourhood of Crown Heights, Brooklyn in The Land, in New York in 2018.

Notably however, Quinn's renderings are not portraits in the traditional sense. For one thing, they bear no obvious visual relationship to their sources. Memory's elusiveness is central to Quinn's drawings, which he envisions in his head rather than relying on sketches or outside sources such as photographs. The resulting protagonists assume a composite, collage-like appearance of stitched-together facial features and body parts to create fractured wholes. Moreover, despite their keen sensitivity to the state of mind of the protagonist depicted, taken together, Quinn's portraits jettison singularity in favour of a visual lexicon in which favoured motifs make frequent appearances. Animal parts such as pig noses and watery gorilla eyes, decorative motifs like flowers and over-sized bows, as well as abstract patterns including polka dots, flags and squiggles-these are just some of the recurrent elements that populate Quinn's drawings and paintings. To quote the artist: 'I believe in life you are an amalgam of numerous experiences. You are built from a history of joy, sadness, ups, and downs. I'm trying to articulate the essence of that...Subjective perception is simply allegiance—unknowingly interdependence of all people—to your own ego. And your ego disallows you from seeing the collective.'1

More than depicting specific individuals in other words, Quinn renders our shared humanity. It is this project that he takes as his subject at Almine Rech. As always, Quinn's protagonists are people he knows-in fact, in this case, they are people he knows well and deeply-and yet, for once, the focus is not on the story they tell or the history they expose. Rather, Quinn takes as his theme his process itself; that is, the very act of taking apart, assembling, and reassembling the subject's interior life. Whereas, according to the artist, cubism analysed, broke apart, and reconfigured the externalised object in abstract form, he aims to expose the many different layers that comprise the subject's inner world; the spectrum of what is felt but not always seen.

Fundamental to this technique are empathy and vulnerability, both of which are necessary when facing the opacity that is another. In approaching his subjects, Quinn attempts to remove self-interpretation as much as possible, not only vis-à-vis his protagonists but also in relation to the materials he uses. In interviews, Quinn speaks about the weight and tension that accompanies the drawn line and the pleasure he takes in confronting the particular drag of each different tool, be it charcoal, graphite, or pastel. As Quinn quipped to me: 'Mr. Pastel, I respect your ability to produce this on paper. I don't understand, but I respect and embrace you.'2 It is this same respect that Quinn brings to his subjects who he increasingly allows to take shape in the moment of their physicalisation on paper or canvas even as he remains undeniably their author. To this end, Quinn adopts a unique working method whereby he covers up his composition leaving only the section on which he is at work visible. In the end, it is not so much that Quinn removes himself from the scene-indeed, that would be impossible-as that he attempts to withhold judgment allowing his subjects to exist in all their irreducible complexity. As he puts it, 'Nothing is more or less important than anything else; neither the gorilla arm, nor the pig nose, nor the elephant feet. Nothing is the 'clue' that unlocks the puzzle. They [the subjects] just exist. They possess the right to exist. Why can't they just have that right without trying to explain themselves?'3

These precepts have always defined Quinn's work; however, in making them his direct and conscious focus, his work has in turn evolved. Whereas previous drawings and paintings have tended to a collage-like appearance with sections separated out and reconnected like puzzle pieces, his new work is more visually fluid as he abandons control and lets the materials be his guide. Forms bleed into and out of each other aided by his applying a loose ground of colour before working on the individual facets of his composition. The curve emerges as a foundational element and, as he pushes and drags his tools, Quinn makes greater use of abstraction. Interconnection; fluidity; reflection and cross-reflection-these are the visual tropes that define Quinn's most recent body of work. What emerges is a collective portrait of the indomitable and uncontainable human spirit.

Sign up to be among the first to know when new exhibitions by Nathaniel Mary Quinn or at Almine Rech open.