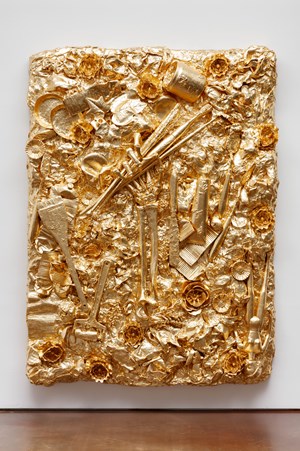 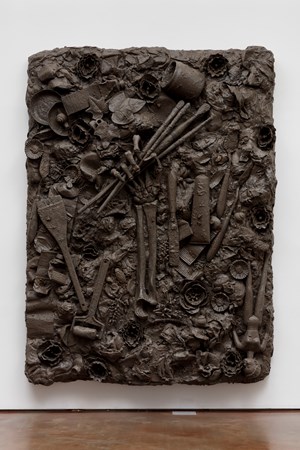 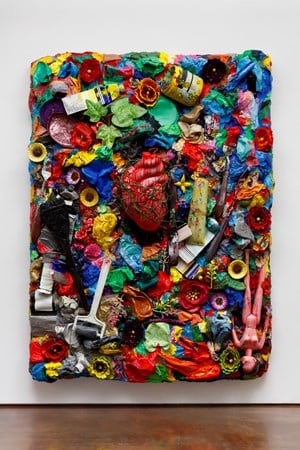 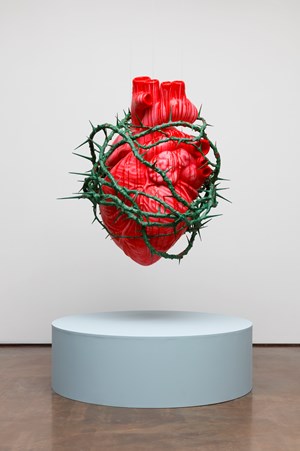 ARARIO GALLERY SEOUL | SAMCHEONG introduces Heart of the Artist—a solo exhibition by AHN, Chang Hong (b.1953- ), who has been crafting out critical reflections on reality in his artwork, on show from May 2 to June 30. This solo exhibition is a place where AHN, widely known and critically acclaimed as a painter, will be showcasing new sculptures produced since 2016, including recent works. The exhibition will comprise a total of around 25 new pieces, including a massive relief, masks, and paintings.

His new reliefs—including the trilogy 'Hand of the Artist' and 'Heart of the Artist'—are on display in the underground floor exhibition hall at ARARIO GALLERY SEOUL | SAMCHEONG. 'The Hand of the Artist' series, which features a jumble of discarded objects such as dolls, paint rollers, paint brushes, paint tubes, and paint dregs with a skeletal hand hanging in the middle of an extended board, is a giant relief that reaches 3m in height and 2.2m in length. The artist depicts the bondage of life through three stages—an assortment of colours, grey, and gold, analogizing them to the life of an artist whose success and failure, joy and despair depend on time and fate in the heat of the intense production process. Heart of the Artist 1, which centers on a painfully bleeding, scarlet-colored heart bound by thorns on a board as big as the one used for Hand of the Artist, metaphorically suggests that the value of life is based on pain and angst, which in turn gives rise to new vitality in our lives. Heart of the Artist 2, as a vollplastik expansion of the heart alone, sits in one corner of the exhibition space, sublime in its gesture to martyrdom.

Contrary to the underground exhibition space comprising large-scale sculptures, the 2nd floor exhibition hall houses two large-size masks and 16 small canvases featuring anonymous faces. The painting series 'Sad Evaporation' (2018) shows deindividuated faces, drawn in rough touches. The artist describes these expressionless faces as 'anonymous people who not only lack names but also presence itself, their existence completely elided.' He projects sad and forgotten realities on to these characterless faces, pointing to historical traumas such as the 4.3 Massacre in Jeju or the 5.18 Gwangju Revolution. The 'Mask-Blindness' series comprises two masks that either lack pupils or have their eyes covered in bandages, devoid of facial expression; they remind the viewers of people who see, yet are blind to the absurdities of reality.

AHN's works have evolved into a variety of series since the 1970s, as seen in 'Dangerous Game', 'Spring Day Goes, Cyborg', and 'Bed Couch' series, but they uniformly spring from his gaze toward those who have been victimized by or alienated from corrupt capitalist systems or the survivalist logic of social evolution. This solo exhibition at ARARIO GALLERY aligns with his abiding interest in these topics. AHN's productions, which effectively capture his perspective and intent, provide the viewers with an opportunity to reflect on their own lives and surroundings.

Sign up to be among the first to know when new exhibitions by Ahn Chang Hong or at Arario Gallery open.