Angela Bulloch's work spans many media, manifesting her interest in systems, patterns and rules, as well as her preoccupation with the history of shapes and human interaction. The Pixel Boxes have become her most familiar work: Initially fabricated in beech wood with a glass front screen, their softly changing and pulsing colours distill and abstract complex visual patterns into simple shifting monochromes. Her series of 'Night Sky' works, begun in 2008 on occasion of theanyspacewhatever at the Solomon R. Guggenheim Museum, New York, depicts existing constellations from a perspective other than Earth, simulated with a 3D stellar cartography program.

The recent series of sculptures, known as 'Stacks', combines her interest in the logic of geometry and seriality with a graphic quality. The appearance of the sculpture shifts according to one's point of view: from one side the irregular aspect dominates, while from another the impression of a certain totemic regularity prevails. 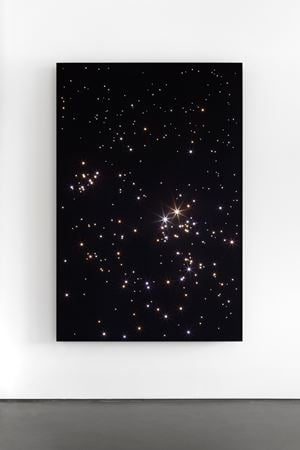