'The exhibition came together following Louise Bonnet's observation about the latent psychological tension in Gustav Klimt's The Kiss. "Don't look at the faces," she said. "Look at how the woman's toes are curled."'

Addressing the darker fears that arise when we encounter the unknown, Domestic Horror probes the friction between the civilised world and baser human impulses. The word 'domestic' contains a potent double meaning here, alluding to the unintended consequences that can occur–in private life and in a larger national and cultural life–where internalised anxieties meet external pressures.

Ndiaye and Spann confront the perils of political turmoil by disrupting familiar images of cultural stability: the office space of the state newspaper of Senegal, in shambles after an anti-government protest; an American flag, deconstructed and reassembled with a single ominous, looming star. Working with structures of concealment and visibility, Figgis and Juszkiewicz construct surreal, discomforting scenes of physical and societal suppression. Figgis's ghoulish, psychedelic painting of a well-dressed family mocks the ritual of aristocratic portraiture, while Juszkiewicz parodies Louis Léopold Boilly's Portrait of Madame Saint-Ange Chevrier in a Landscape (1807) by suffocating the titular subject with fabric and foliage wrapped tightly around her head.

As a subversive nod to the tradition of depicting dead game in academic still-life painting, Merrill's Cat with Eel and Snail (2019) instead imagines a moment in which the artist's subjects break free from a carefully composed tableau. Merrill reanimates the once lifeless forms of the cat, eel, and snail, allowing them to inflict their inherently violent tendencies upon one another. While Merrill's subject matter and muted colour palette constitute a sombre memento mori, her loose, erratic brushstrokes imbue the scene with a frenetic energy that is very much alive.

Rife with physiological drama, the fleshy, fabric-draped forms of Bonnet's Interior with Pink Blanket (2019) exaggerate the human body's contours to the limits of recognisability. Her eerie composition suggests that in everyday life only the thinnest veneer of propriety masks the grotesque from view.

The exhibition space is viewable through the storefront windows, twenty-four hours a day. 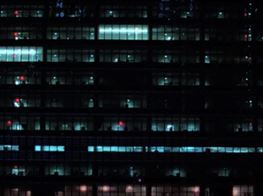 The first Thursday in September comes like a sharp ring of an alarm clock, stirring the last dregs of summer in the city. It marks the awakening of all things culture across the Tri-state Area— as vagabond New Yorkers and visitors flock from all around the world to savor the newest in fashion, their appetite for visual art must also be met....

3 new artworks have recently been added by Gagosian.
Sign up now to be among the first to know when new artworks are added.