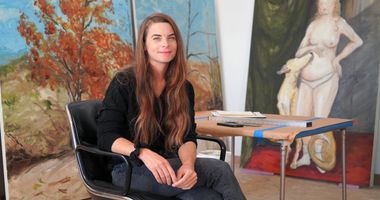 From the ancient poet Sappho to Dolly the sheep, Tanya Merrill's paintings draw symbols and motifs from mythology, art history, and contemporary popular culture. Many of her artworks invent narratives to examine our relationship to nature, as well as cultural portrayals of gender and sexuality.

After graduating with a degree in creative writing and visual arts from New York's Sarah Lawrence College in 2009, Merrill went on to work at the Dumbo Arts Centre in Brooklyn and the San Francisco Museum of Modern Art. The artist continued to paint while contributing to Riot of Perfume, an independent art-and-fashion magazine based in New York City.

In 2015, Merrill enrolled at Columbia University, where she studied under Gregory Amenoff, Jon Kessler, and Rirkrit Tiravanija. It was at her inclusion in the university's First-Year MFA Exhibition in 2017 that she began to attract attention for her figurative paintings. Three years later, the artist held her solo exhibition Woman Laughing Alone in the Woods at Night at New York's Half Gallery; despite its premature closing due to the onset of the Covid-19 pandemic, the show sold out.

Tanya Merrill's artwork often evokes the chains of power that govern the ecological system. Cats are the usual predator, rendered in a quick succession of almost graphic brushstrokes in Dead but still scared (2018) or comprising unstable contours and rough marks that reflect its ferocity in Cat with blue fish (2020). Humans are very much part of the food chain, as the artist told Ocula Magazine in 2021, and 'take on characterisations that are connected to the real world and my concerns for the environment'. In the painting Man with Gun (2020), Merrill portrays a well-dressed gentleman happily hugging a gun in front of a fire—an alarming embrace of violence and destruction in public.

Subjects from across time periods and geographical locations congregate in Merrill's work. Antoinette (The White Skirt) (2019) depicts the 18th-century French queen in a chair, the diagonal line of her body resembling that of the adolescent girl in The White Skirt (1937) by Balthus. Where Balthus captured the ambivalent youth and meekness of his subject, Merrill has painted a defiant woman with an expressive face. The work also humorously shows Marie Antoinette nude from the waist down, with the white skirt effectively absent; the artist has said that 'to be bottomless is very empowering'—to be comfortable while nude—in her interview with Ssense in 2019.

Sign up to be notified when new artworks and exhibitions by Tanya Merrill are added to Ocula.
Sign Up Login