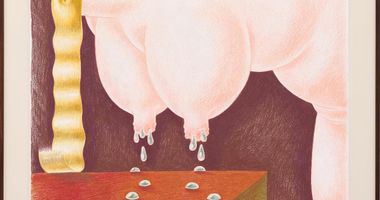 Louise Bonnet is a Swiss surrealist painter informed by alternative comix and dark humour. Her grotesque, corporeal figures often dominate the dreamlike settings they exist in, drawing on themes of gender, sexuality, and shame.

Born in Geneva, Switzerland in 1970, Louise Bonnet attended the University of Art and Design before relocating permanently to Los Angeles in 1994. Having worked for years in illustration and graphic design, it wasn't until 2008 that she launched her career as an artist.

Bonnet's first solo show was well placed to be held at Subliminal Projects—a gallery and project space founded by Shepard Fairey and Blaize Blouin. Predicated on the principles of art accessibility, their message resonated with Bonnet's rejection of the prescriptive formality she experienced in Switzerland's fine art museums.

Initially working primarily in acrylic paint, Bonnet's practice changed when she began working with oil paint in 2013. What acrylic paint previously rendered flat gave way to much more careful manipulations of light and form, resulting in her characteristically fleshy and labile subjects.

Drawing on Surrealist art, Bonnet also cites films as influential references in her work. Looking at ideas of voyeurism, her comic, softly painted figures produce an inside-outside dynamic that places the viewer at a distance from the world of the paintings. In The Hours, her 2020 show at Gagosian, her figures are contorted into peculiar and grotesque positions. All of the figures lack eyes, increasing the distance of the viewer from the works while simultaneously encouraging viewers to look on, unbridled by the shame of staring.

Bonnet's work is also interested in dissolving the boundaries between mind and body. Exploring the vulnerability associated with openings of the body, many of her figures exhibit features that resemble genitalia. This exploration of the relationship between the physical and the psychological, the personal and the public, the private and the exposed engage with themes that have been used by the likes of filmmaker Alfred Hitchcock and artist Peter Saul. Bonnet captures these ideas through stills, like a movie, placing the viewer in the middle of a narrative for which they have no context.

Sign up to be notified when new artworks and exhibitions by Louise Bonnet are added to Ocula.
Sign Up Login