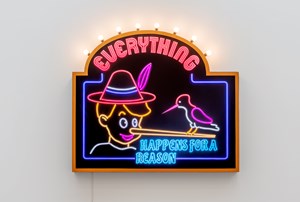 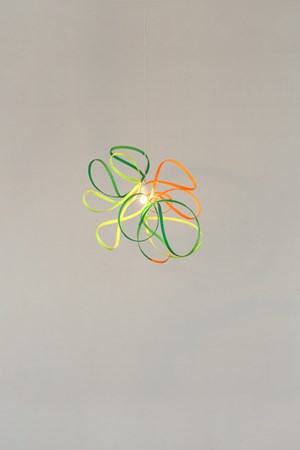 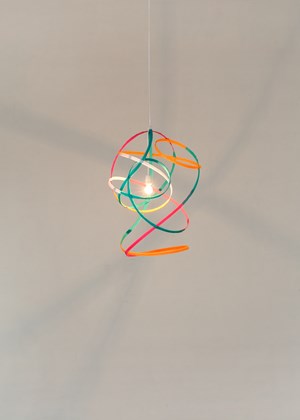 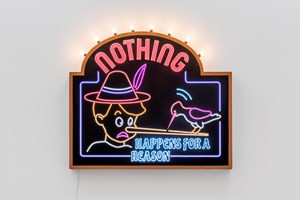 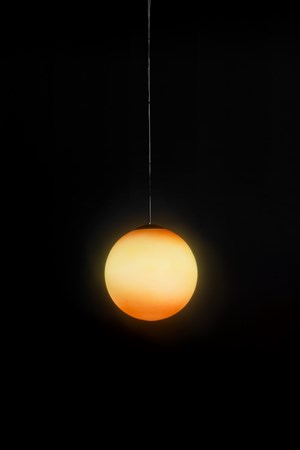 Galerie Urs Meile is pleased to announce Blind and a little less, Tobias Rehberger's second solo exhibition with the gallery after Das Kind muss raus 生 presented in Beijing in 2014. Following a major solo exhibition devoted to Tobias Rehberger at the Rockbund Art Museum in Shanghai–If you don't use your eyes to see, you will use them to cry (23 March–26 May 2019)–Blind and a little less draws on the Shanghai exhibition and delves further into existing themes and series of works. Divided into four parts, the exhibition includes a first section dedicated to the ongoing 'Vase Portrait' series (1997–2019); a second section presenting brand new 'Planet' lamps (2019) and some 16 lamps from the ongoing 'Infection' series (2002–2019); a third section consisting in 4 pixelated large-scale tableaux (2019); and a final section presenting new LED works (2019) and some watercolours (2019). Across a large array of techniques and mediums, Tobias Rehberger once again blurs the lines between conceptual art, sculpture, interior design and architecture.

The vases and flowers in the first room form 'portraits' of friends and acquaintances, representational but not literally. The vases are as diverse as the subjects, in shape and materials, including glass, ceramics, plastic, 3D-printed aluminium and felt. Like friends and social acquaintances, there are more permanent elements (the vases) and more ephemeral ones (the flowers–which eventually wilt and must be replaced, though always with the same type of flowers). The vases are portraits of nine artists represented by Galerie Urs Meile, who each completed their respective portrait by choosing the flowers to be displayed in it. Together the portraits form a matrix of histories, connections and influences. And the smell! The room is heady with the perfume of all the flowers, their pollen floating around and making people sneeze, embodying artistic cross-pollination and allergic reactions.

On the left of the second space hangs a series of sun-like glass globes, whereas chandeliers of bands of coloured Velcro tapes, squiggle lines of colour, seem to float on the right side of the room, as if drawn freely in space. 'The Infection' series, which began in 2002, starts as compositions made by Rehberger's assistants. The artist then intervenes with his own artistic editing but without adding materials, in an approach of 'controlled chance' and 'deferred authorship'. There is a light touch to these chandeliers, sculptures that illuminate the space but also our understanding. Sculptures are traditionally thought of as matter in space, but these Infections transmit light, light from inside a drawing composed of swishes of colour that curl through air, the two-dimensional coloured bands transforming three dimensional space, relying on gravity and material tension to hold their curling forms. Of course, they are also held up by the very cables which powers the light-each element relies for existence upon the others.

The third space might be the one that best embodies the title of the exhibition. At first these colourful pixelated tableaux have a child-like charm as visitors discover the trick, as if something secret was revealed. These apparently abstract conglomerates of tiles start revealing themselves as viewers pause, fold their eyes, tilt their head and filter the image through the lens of a camera in order to decipher these encrypted images. The coloured slump suddenly takes shape before the viewers' eyes, as if they had become a little less blind. Six wall-mounted shelves are skilfully camouflaged in the work, an omnipresent technique in Rehberger's practice, who enjoys blurring the limits between the visible and the invisible, ultimately questioning the very nature of art: is art something to be stared at directly, or rather something to be experienced in a much broader sense?

The fourth room of the exhibition features a series of watercolours as well as two new LED works, which imitate the likes of flickering advertising signs. However, the familiar commercial slogan is replaced here by two antagonist adages commonly attached to popular wisdom (as does the figure of Pinocchio): 'everything/nothing happens for a reason'. As the lights flicker, one can alternatively read 'very happea' and 'not happea'. Immersed in colourful lights, the audience is encouraged to take a look at the commercial and moral values of society from a different perspective. The watercolours exhibited in this space also invite viewers to reflect on social conventions and interactions, as they all show cigarette butts crushed into half-emptied plates of food.

Tobias Rehberger (b.1966 in Esslingen, Germany) lives and works in Frankfurt am Main, Germany and has been a professor of Fine Arts at the Frankfurt Städelschule since 2001. Selected solo exhibitions and projects include If you don't use your eyes to see, you will use them to cry, Rockbund Art Museum, Shanghai, China (2019); Yourself is sometimes a place to call your own, The Museum of Contemporary Art, Busan, South Korea (2018); 24 Stops, Fondation Beyeler, Basel, Switzerland (2016); Home and Away and Outside, Schirn Kunsthalle, Frankfurt, Germany (2014); Tobias Rehberger: Wrap it up, MACRO Museum, Rome, Italy (2014); Dazzle Ship London, River Thames, London, United Kingdom (2012); When I See the Other Side of Heaven, It Is Just as Blue (commission), The Leeum Samsung Museum of Art, Seoul, South Korea (2012); Nest (commission), Bloomberg SPACE, London, United Kingdom (2012); Tobias Rehberger, MAXXI, Rome, Italy (2010); The Chicken-and-Egg-No-Problem Wall-Painting, Stedelijk Museum, Amsterdam, Netherlands (2008); On Otto, Fondazione Prada, Milan, Italy (2007); Get a New Liver, Tate Liverpool, Liverpool, United Kingdom (2006); Private Matters, Whitechapel Gallery, London, United Kingdom (2004); Night Shift, Palais de Tokyo, Paris, France (2002) and The Sun from Above, Museum of Contemporary Art, Chicago, USA (2000). Rehberger was awarded a Golden Lion as best artist at the 2009 Biennale di Venezia.

The above text includes excerpts from an essay written by Christopher Moore on the exhibitions If you don't use you eyes to see, you will use them to cry (Rockbund Art Museum, Shanghai) and Blind and a little less (Galerie Urs Meile, Beijing). Christopher Moore is an art historian, critic and cofounder of Ran Dian art magazine, where he held the position of publisher from 2010 to 2018. He then joined NRM, a new curatorial consultancy. Moore continues to contribute to Ran Dian and he is the editor of a monograph on Xu Zhen, published by Distanz in 2014.

Blind and a little less

Sign up to be among the first to know when new exhibitions by Tobias Rehberger or at Galerie Urs Meile open.