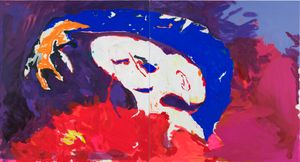 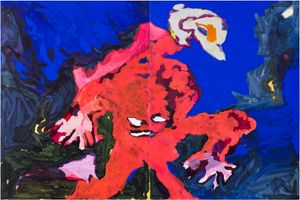 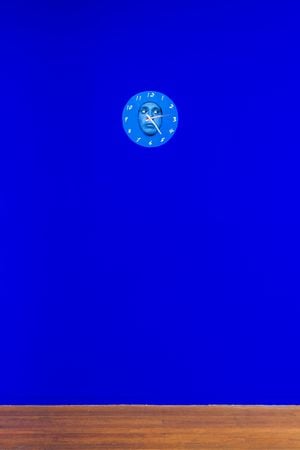 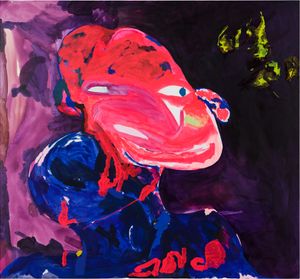 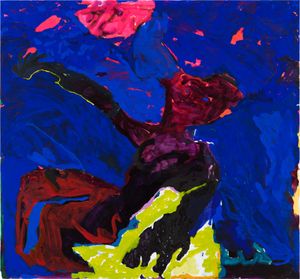 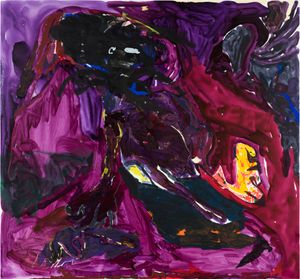 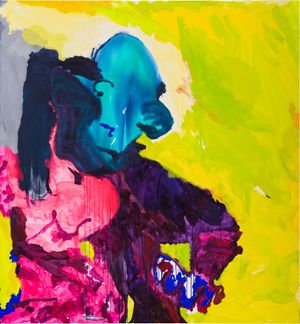 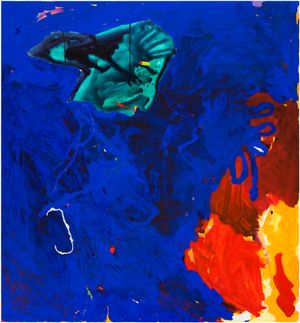 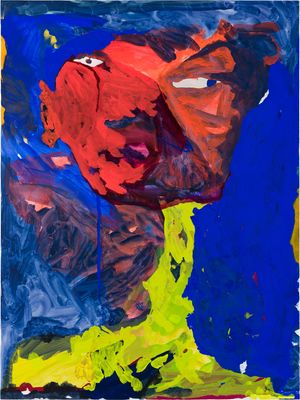 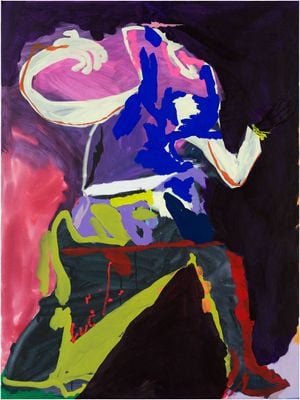 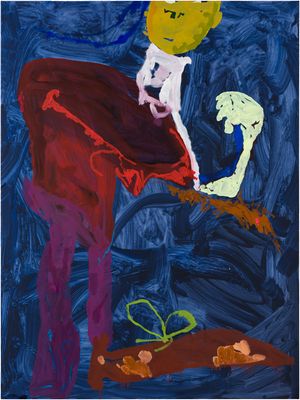 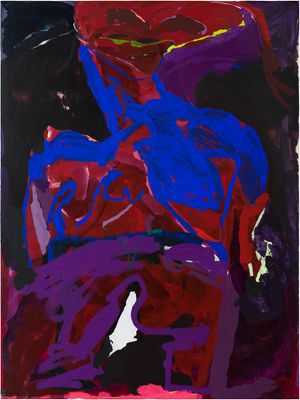 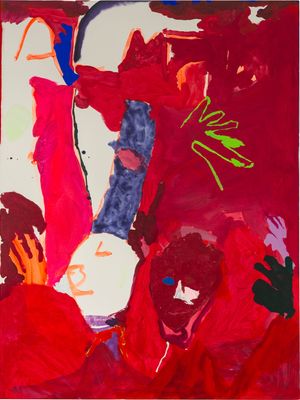 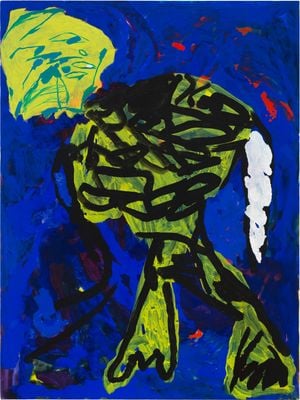 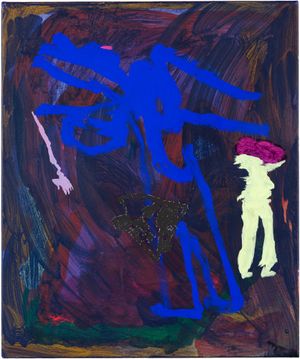 Tom Polowhere do you go, when no one knows, 2021acrylic and Flashe on canvas
60 x 50 cm Roslyn Oxley9 Gallery Contact Gallery 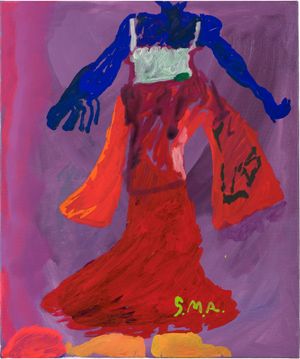 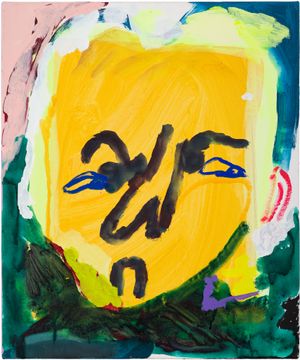 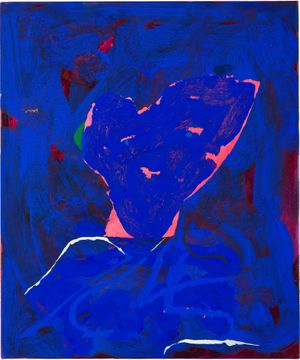 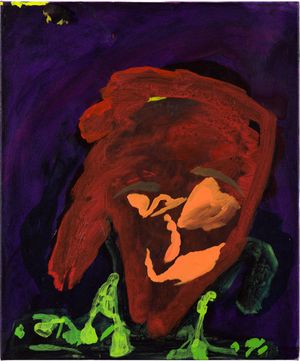 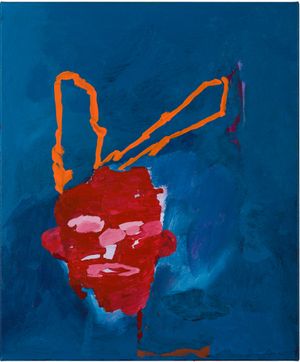 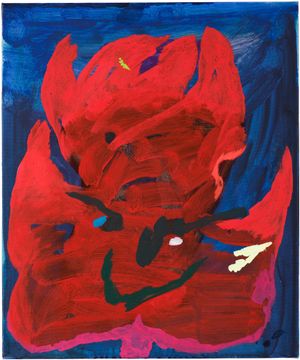 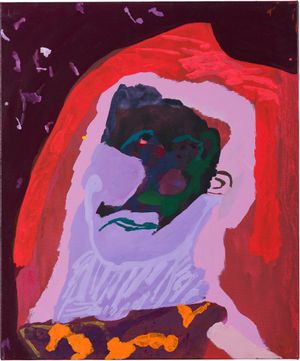 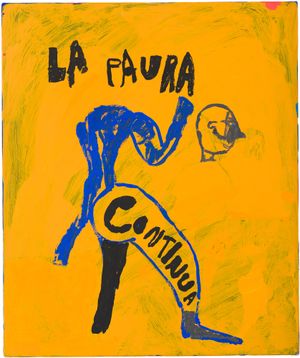 Linger. linger. A word that implies by its very definition, an elongation of time; of waiting; of staying; of existing in a space of contemplation. Yet a word we don't necessarily feel comfortable spending a lot of time with. The act of lingering from moment to moment or between two moments enables the opening and expansion of space, a home for betweenness. The natural inclination to want answers, to define, to move quickly towards exactitude is relinquished during times of lingering. It is within this space of uncertainty, of uncomfortable tension that we reside in Tom Polo's exhibition of new paintings, linger, at Roslyn Oxley9 Gallery.

In Polo's new body of work, figures are submerged within a surface of swirling layers of paint, varied brushstrokes and painting techniques that create a complex surface plane where foreground and background appear to merge, melting from one state into the next. Lingering on a threshold of presence and absence, what is painted in and what is painted out, Polo's figures, — looming characters — are both revealed and concealed creating a surface tension that draws attention to the spaces in-between.

The viewer's position, synonymous with the painting's figures as both the looker and the observed, reveals a performative spectatorship. As if waiting in the wings to go on stage, the figures/viewers are simultaneously departing and arriving, embodying a place in which to reside longer than necessary but perhaps uncertain where that place may be.

Cue The Cranberries 1993 hit Linger: 'if you could return... And I'm in so deep... you have me wrapped around your finger', 'do you have to let it linger?' Yearning for a relief from being left to wallow in limbo; the desire to find an answer through returning somewhere but perhaps not finding the way there - the song's message also seeps through Polo's paintings in linger. Like swirling rivers of colour, dragging the figures/viewers down into its depth then spitting them back out to the surface, to hover like colourful blobs, absorbed and immersed below the surface yet able to float above, they find a position that is ultimately undefined and seemingly reckless.

On first glance Polo's painting are glorious emulsions of colour. Vibrant, luxurious surfaces that ooze gorgeous colour combinations, and richly textured layers. Peppered with witty quips and delightful characters, the viewer is invited in to play. As one commits to their role in this theatrical deluge, dismembered limbs and supersized heads - caricatures that jeer and laugh bounce out of the background, to become an entry point for the absurd and ridiculous to take shape.

We desire to get close to Polo's paintings, to connect, to be part of his theatre but an uncertain tension questions our position within this stage set. ­­­­­­Are we voyeur to Polo's cacophony of characters, the odd balls and the misfits? Lingering a little too long, seeking intimacy like The Cranberries' protagonist, or, are we pawns in Polo's perpetual in-joke - observing, waiting to be told what to do?

Intimate moments entice us to continue: the nod of a head, the twist of a torso, the wave of a giant hand - delightful articulations for which we hit pause. Definitive little marks of paint hint at who the characters are, accenting their personalities, providing moments of clarity for a time only to dissipate into the watery soak-stained backgrounds.

Polo's position in this dance is somewhere in the middle. The presence of the puppeteer yet like the viewer an active embodiment of the works, acting in the space between audience and art. There is certainly a sense of bodies within this space. A corporeality which invites participation and allows us to sink into its depth.

In linger Polo's approach has become looser, muddier and murkier, sinking deeper into his practice and into the complex psychological relationship with his characters and his relationship to the viewer. This multifaceted association of the psyche and the individual, the artist and the subject plays out within Polo's sense of sophisticated theatrics where we are ultimately seduced into a spectacularly fantastical world.

Softly painted out in the work watch and witness are the words 'ancora ancora' reminding us of the concept of time in Italian - to be 'still still'. Ultimately steeped in Polo's practice of observation, the engaged outsider becomes the insider as the artist inserts himself directly into the show as a clock. In an eight-hour video installation, clockwatch (linger), set to gallery hours, the artist surveys and watches whilst also performing, and at times absorbing completely into the blue wall, his final disappearing act. It is in these clever moments of lingering time, of stillness, that the roar and fervour of this exhibition makes sense.

Sign up to be among the first to know when new exhibitions by Tom Polo or at Roslyn Oxley9 Gallery open.
Sign Up