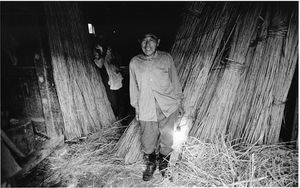 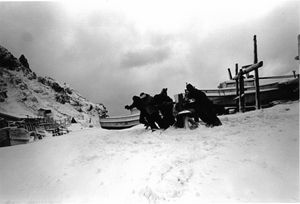 Kazuo Kitai began practicing as a photographer as a result of his involvement in various political movements and struggles, beginning with the Nihon University struggle of the 1960s and including the Sanrizuka struggle, which he documented in Sanrizuka (1971). Later, Kitai stepped away from this milieu and set off on a journey on foot all over Japan, from Hokkaido to Okinawa. His aim was to record the "scenery" in rural areas of Japan that was destined to be lost as the country underwent rapid economic growth. One of the series that resulted from this project, Somehow Familiar Places, is today regarded as among Kitai's most important achievements. Shin Yanagisawa started his career as a photographer just a few years before Kitai, gaining recognition from his early days as a newcomer. He was an unprolific artist, holding just four exhibitions of his own volition and publishing just two photobooks in his lifetime, but he captured with his camera aspects of the rapidly developing cities and the light enveloping the natural features and people he encountered while traveling throughout Japan, from snow-laden rural communities to coastal areas. Filled with an acute atmosphere of tension, Yanagisawa's works form one of the poles of black-and-white photography in post-war Japan.

From among the scenes of Japan these two photographers witnessed through the medium of black-and-white photography, we present a cross-section of Japanese photographic history. We invite you to take a look.

Sign up to be among the first to know when new exhibitions by Kazuo Kitai & Shin Yanagisawa or at Yumiko Chiba Associates open.
Sign UpLogin