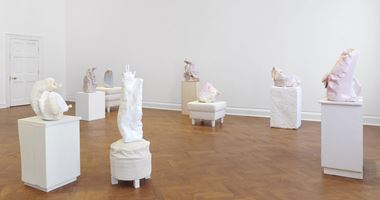 While Erwin Wurm works with many mediums, including found objects, clay, and photography, wry humour is his primary material. Taking cues from conceptual and performance art, Wurm uses absurdity to comment on Western attitudes toward commodities, food, ethics, and philosophy.

Erwin Wurm was born in 1954 in Bruck an der Mur, Austria. His work often involves either recontextualised readymade objects or highly distorted recreations of familiar forms. While his practice may at first seem jovial, beneath its comedy is a critique of the darker aspects of the post-war society the artist grew up in.

One method of distortion Wurm plays with is the skewing of scale. Erwin Wurm's sculpture Narrow House (2010), for example, mimics the depth and height of an ordinary home, while its width is dramatically condensed. Viewers are invited to enter the exceptionally thin house whose contents have been made extremely narrow, creating a sense of claustrophobia that Wurm likens to that of the 'narrow society of the 50s and 60s when I grew up in Austria'.

Other Erwin Wurm artworks address overconsumption by exaggerating an object's size. Outside the artist's studio in the Austrian countryside is the sculpture Fat House (2003), which contrasts Narrow House by appearing exceptionally bloated, while for the sculpture series 'Fat Cars' (2001–2005), Wurm created oversized car replicas.

In Fat Convertible (2004), a Porsche's normally sleek figure is swollen as though its innards have expanded from within and are barely contained by its glossy red exterior. By drawing comparisons between industrial and biological bodies, the work invites critique of the insatiable appetite of consumerist culture.

Vehicles are a recurring motif in Wurm's work. Installed in Brooklyn Bridge Park in 2018, Hot Dog Bus made a Volkswagen Microbus into a bulbous, mustard-coloured, functional hotdog truck. The sculpture Renault 25 1991 (2008) resembles a life-sized car slanted dramatically to one side, while the van in Telekinetically bent VW-Van (2006) is curved to appear to be making a quick turn. Both works play on the visualisation of speed in photographs and film.

Perhaps Wurm's best-known series, 'One Minute Sculptures' (1988–ongoing) comprises works based on simple instructions for participants to assume poses for 60 seconds. In The Speculative Realist (2015), participants are instructed to stand on one leg and balance a highlighter between their knee and chin. Roast yourself under the sun of Epicurus (2007) asks the public to place their head in the space between a plinth and a glowing lamp that hangs above it.

While Erwin Wurm's 'One Minute Sculptures' are often presented in galleries and museums, and activated by a public willing to look silly, they are also documented in photographs that Wurm refers to as 'Photographic Sculptures'. Wurm has spoken about his strong and direct manner of communicating, saying 'I once read that [finding] the short way is the most important thing. I took this maxim to heart.'

Wurm's use of humour to make difficult subject matter easy and accessible is part of a long-standing comedic tradition, and he sees it as facilitating the possibility for light and open conversation around subjects that, while important, may otherwise be hard to discuss. Summing up his goal he says, 'Many artists are good at making the easy difficult. I'm interested in making the difficult easy.'

In recent years, Wurm has been turning toward abstraction and working with clay. In a series that he refers to as 'Portraits', everyday objects like power cords and stationery are worked into amorphous clay sculptures that he casts. Another series sees Wurm conceal guns with clay to make bulbous forms resembling phalluses—sharply indicative of the artist's use of humour to overlay sinister truths.

Wurm lives and works in Vienna and Limberg, Austria.

For the next five months, an orange freight truck will be standing on its head outside the Austrian Pavilion at the Venice Biennale. Visitors are invited to go up the stairs to a small enclosure at th

Part of why Wurm’s prankish one minute sculptures never quite get old is that we humans, the butts of his jokes, make a habit of walking right into them—and enjoying it.

Sign up to be notified when new artworks and exhibitions by Erwin Wurm are added to Ocula.
Sign Up Login