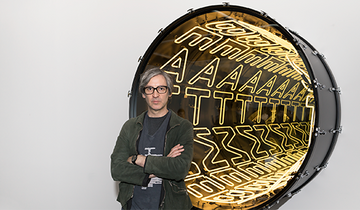 Iván Navarro is a Chilean artist celebrated for his unique use of light, sound, and text to create socio-politically charged sculptures and installation. From his furniture made with fluorescent or neon lights to his optical illusions created by lights bouncing off mirrors, Navarro's work offers enticing sensory experiences, while drawing attention to global concerns.

Iván Navarro's work is in part informed by his experiences of growing up under Augusto Pinochet's military regime in Chile (1973–1990). Where Are They? (Dónde están?, 2007), for instance, consists of white fluorescent-light letters that spell the names of perpetrators of human rights violations during the dictatorship. Criminal Ladder (2005), a ladder made of white neon tubes, similarly displays the name of a perpetrator on each rung. The use of light in both works is another reference to Chile's dark past, in which the dictatorial government deployed electricity not only as a tool of torture and execution but also as a means to control civilians' lives by severing power supply to reinforce curfew.

In You Sit, You Die (2002), Navarro extends his concerns beyond Chile. In his version of the electric chair, built using white fluorescent light bulbs and printed paper, the artist shows the names of individuals who had been executed by such devices in Florida. Drawing on the history of the state use of electricity, Navarro examines its potential as a symbol and tool of power.

Favouring light as his primary medium, especially fluorescent light in the early years of his career, Iván Navarro's works have often been described as quoting Dan Flavin's sculptures. Additionally, he is also noted for his appropriation of the works of other Minimalist artists, into which he introduces explicitly socio-political context.

With Homeless Lamps, the Juice Sucker (2004–5), Navarro evokes Flavin in his use of fluorescent tubes to construct a grocery cart, an item also used by homeless people for storage and transportation. In the accompanying video, the artist and his friend navigate the streets in search of public electricity to light his sculpture. In the background, a 1905 Mexican revolutionary song plays while Navarro is constantly on the move, alluding to the division between the wealthy and the poor and the difficulties migrants face as they struggle to anchor themselves in a new environment.

Death Row (2006), the centrepiece of his exhibition at the 53rd Venice Biennale (2009), is a series of thirteen aluminium doors that derive their bright colours form Ellsworth Kelly's Spectrum (1969). Unlike Kelly, who treats the colours as solid objects, Navarro's colours appear as frames in neon lights that reflect off the aluminium to create an optical illusion of corridors of light leading into the void.

In Death Row, the artist placed another work in front of the doors: Resistance (2009), an interactive installation that invites the spectator to pedal a bicycle to turn on the neon bulbs attached to the vehicle. An accompanying video by the same title features a man riding the same bicycle around Manhattan, a performance that contrasts the amount of energy necessary to illuminate the cart to the excessive presence of neon lights in the city. In Venice, the participant faced a different predicament: the bicycle, regardless of the amount of pedalling, is stationary; and the doors, though enticing in their bright colours, are an illusion.

Iván Navarro continues to explore the potential of light, text, and sound to create sensory illusions and challenge our sense of perception. For the exhibition Heaven or Las Vegas (2012) at Paul Kasmin Gallery in New York, he presented light sculptures based on the shapes of skyscrapers such as New York's Flatiron building and World Trade Centre, and the Jumeirah Emirates Towers in Dubai. The view of these skyscrapers Navarro offered, however, was not from the ground but from their topmost floors, rendered as abstract forms. Fitted with neon lights and mirrors, each sculpture creates reflections of light that recede into infinity. Navarro also punctuated the works with words including 'burden', 'shelter', 'decay' and 'desert', whose meanings contradict the grandeur and optimism skyscrapers typically signify.

In Mute Parade (2016), another exhibition at Paul Kasmin Gallery, Navarro filled road cases–usually used to carry musical instruments–with mirrors and neon lights. Inside each structure of Impenetrable Room (2016), an installation comprising six 6 x 6 foot road cases, undulating neon lights in green trace the propagation of sound waves. Tuning (2015) offers another visualisation of the notion of sound through a pyramid of six drums lit by LED lights that reflect the words HIGH, TONE, TUNE, BASS, MUTE and DECAF into the other sides of mirrors. In the absence of sound, Navarro orchestrates light and text to create a perception of sound. This contemplation of the relationship between vision and audition is further prompted by black and white paper cards scattered on the gallery floor, which carry the words 'Read You' and 'Loud Unclear' on both sides.

Iván Navarro graduated with a BFA from PUC University of Chile, Santiago, in 1995 and has been living and working in New York since 1997. In 2021, Navarro held his retrospective exhibition PLANETARIUM in Paris, a collaboration between Centre Quartre and Templon.

There are layers, and there are pieces where you don't necessarily see these layers, but they are present because they are things that I have always been interested in.

With 147 participating galleries from 32 countries and some 800 artists represented on the fair floor, over 30 percent of whom were below the age of 40, the fiftieth anniversary edition of Art Brussels was in youthful spirits, despite being the second oldest art fair in the world after Art Cologne.

Founded in São Paulo in 1989, Galeria Nara Roesler is one of the most established contemporary art galleries in Brazil.