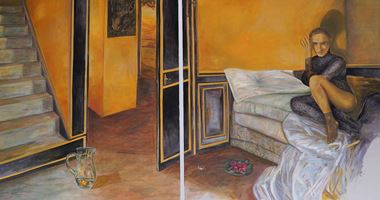 Born in Montevideo, Uruguay, and raised in Buenos Aires, Mulleady later moved to Paris, where she studied theatre with Ariane Mnouchkine at the École Internationale de Théâtre Jacques Lecoq. Traces of a theatrical influence can be found in the geometric patterns with which she frames works like The Green Wave (2018). Her works have also been particularly influenced by master of French modern theatre Antonin Artaud.

Turning her attention to painting, Jill Mulleady attended the Chelsea College of Arts in London, graduating with an MFA in 2009. In 2013, she moved to Los Angeles, where she currently lives and works. She has largely focused on creating figurative oil paintings, except for a number of abstract works painted between 2011 and 2014.

The paintings for which Mulleady is best known are often unsettling, expressive works that embody mysticism and realism, often incorporating strange and contorted creatures with realistic figures, including familiar writers, poets, and artists. The contemporary collides with the mythical and the historical in elaborate dream-like worlds as imagery is borrowed from the past in references to historical painting, and from the present in the form of popular culture and personal experience.

The content of Mulleady's works jumps between beautiful and horrific. Sexuality and violence are often at the forefront, as seen in paintings such as Prince S II (2017). Time also plays a role, and some paintings and series extract scenes from one continuous narrative, as in Prince S II and Prince S (2017).

In contrast to the more fantastical scenes, Mulleady also paints realistic images of quotidian details of domestic life: things like haphazardly packed suitcases, vehicle interiors, cluttered desks, and stacks of dirty dishes in the sink or dishwasher are all presented in sharp California sunlight. These motifs, alongside depictions of frayed familial interactions, invite the viewer to witness the difficult balance of domestic life and creativity.

The artist's works are further enhanced within her exhibitions by the addition of sculpture, installation, and ready-mades. Jill Mulleady's Swiss Institute, New York, show, Fight-or-Flight (2019), for example, features Vault Room (2019): a room containing an opened automatic teller machine, closed off behind a bank vault door.

Jill Mulleady is quickly becoming well known on the international art scene. She featured in the 58th Venice Biennale in 2019, and major collections, such as the Smithsonian in Washington, D.C. and the Hammer Museum in Los Angeles include works by Jill Mulleady. UCLA also welcomed her as a lecturer in the Painting Department in 2018.

The Swiss-Uruguayan artist here challenges viewers with a single, colossal painting and a group of provocative conceptual pieces.

Sign up to be notified when new artworks and exhibitions by Jill Mulleady are added to Ocula.
Sign Up Login