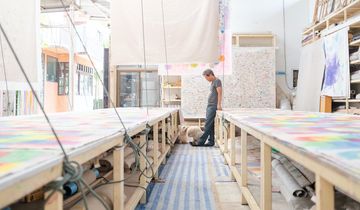 Contemporary Thai artist and activist Mit Jai Inn is known for his strikingly sculptural and vivid paintings that challenge traditional modes of painting and exhibition. Mit is a co-founder of the Chiang Mai Social Installation (CMSI) and the founder of Cartel Artspace in Bangkok.

Mit Jai Inn studied art at the Silpakorn University in Bangkok from 1983 to 1986, but left during his final year to travel around Germany. Between 1988 and 1992, Mit attended the University of Applied Arts in Vienna, where he made sculptures and met Franz West, who hired him as a studio assistant. Mit's early works during this period were unstretched and unframed, as well as tactile and double-sided to counter elements of traditional painting.

Encouraged by gallerist Alfred Pawlin, co-owner of the Visual Dhamma Gallery in Bangkok, Mit returned to Thailand, which was then under military occupation.

Mit paints in his outdoor studio in Chiang Mai, working with a rigourous process of mixing, applying, overlaying, and eroding pigment with palette knives and blocks of dried oil paint revived with linseed oil. Once dispensed on the canvas, densely layered paintings emerge, depicting fluorescent lights and nocturnal moods.

In 1992, Mit co-founded the Chiang Mai Social Installation (CMSI) with fellow artists, scholars, and activists including Uthit Atimana. Thailand's first public art programme, the CMSI encouraged artists and non-artists to create art, even remotely—Mit would follow their instructions to make a work of art if they could not come to Chiang Mai.

As Tessa Moldan writes for Ocula Magazine: 'Mit's practice is deeply influenced by the Fluxus movement, in particular Joseph Beuys' concept of social sculpture. Every aspect of life can be considered creative. The artwork is a gift shared with others.'

Mit's conception of the artwork as a physical object is evident in the varying sizes and forms of his paintings, some of which are long rolls of canvas that spread across the floor and others are suspended from the ceiling in crowded arrangements.

In Plane (Electric) (2019), shown at Art Basel Hong Kong in 2021, curtains of paintings cascade from the ceiling as a wall of painting forms a perimeter along the floor. The massive installation recalls Mit's open air studio in Chiang Mai, while referencing the industrial history of Cockatoo Island, where it was made.

Light does not always equate or evoke joyfulness in Mit Jai Inn's work. In the 'OOBE' series (2019), which stands for 'out of body experience', 20 unstretched canvases are lined along the outer walls of a Buddhist hall. Depicting soft curves, rendered in a gentle hue of primary shades, the abstract paintings are reflective of the artist's belief in the potential of art to initiate spiritual and societal changes.

A recent exhibition on Ocula is Collectors Plus at Silverlens, Manila.

Ocula Feature The 5th Aichi Triennale Is a Reminder to Keep Living By Sujin Jung, Aichi The 2022 Aichi Triennale celebrates resilience in the face of precarity and invites viewers to imagine life beyond the logic of survival.

Read More Ocula Insight Mit Jai Inn: The Artwork as Gift By Tessa Moldan, Birmingham It is only in recent years that the artist's kaleidoscopic paintings have found an international following.