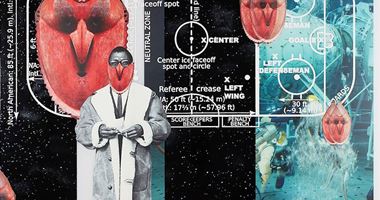 In his collaborative and interdisciplinary practice that conjoins art and science, Tavares Strachan leads an investigation into the hierarchical forces responsible for the production of cultural knowledge. Strachan is most recognised for his ongoing Encyclopedia of Invisibility: a research-driven compendium that documents people, places, concepts, artworks, scientific phenomena and objects forgotten from official histories.

A key figure in Tavares Strachaan's artwork is Matthew Henson: an African American explorer who journeyed to the North Pole with Robert Peary. While Henson was the first to reach the North Pole in their 1909 expedition, his endeavours were shadowed by Peary's. Polar Eclipse (2013)—presented at The Bahamas' National Pavilion at the 55th Venice Biennale—featured a re-enactment of Henson's voyage in a 14-hour video, exhibited alongside other works including two preserved blocks of ice.

The sculpture The Encyclopedia of Invisibility—Tavares Strachan's contribution to the 57th Carnegie International (2018)—drew from the artist's larger Encyclopedia of Invisibility project. The installation presented 54 neon texts across the Carnegie Museum of Art's facade, spelling names largely left out of history books, including Baroque painter Artemisia Gentileschi and Chinese revolutionary and feminist Qiu Jin. Placing them next to those etched into the museum's stone, the artist revealed the mechanics of remembrance and erasure in a society that favours the white Euro-American male.

For Desert X 2017, Tavares Strachan presented another monumental neon sculpture, scattering neon tubes in the deserts of Palm Springs, California to spell 'I Am' from a distance. In the accompanying statement, the artist described the desert as a place for human beings 'to disconnect and reconnect with questions about who they might be.' In 2020, he also installed the pink neon words, 'We are in this together', under a mountain gondola lift in Telluride, Colorado, popular with both tourists and locals.

Be among the first to know when new artworks and exhibitions by Tavares Strachan are added to Ocula.
Sign Up Login