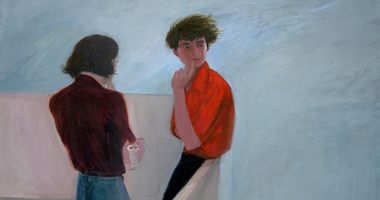 Born in Wuhan, China, in 1989, Cheng studied sculpture at Beijing's Tsinghua University, graduating in 2012, before pursuing an MFA at the Maryland Institute of Art in 2014.

Cheng went on to complete a residency at the prestigious Rijksakademie in Amsterdam between 2016 and 2018, before settling in Paris where she now lives and works.

Xinyi Cheng has carved a practice depicting friends and acquaintances in scenes of interaction and going about their daily activities. Figures are set against undefined backgrounds and unified by a muted colour palette, creating environments which exist within fleeting states of absence.

Her swift application of paint adds to her character's sense of ambiguity, while her subject's glazed expressions, absorbed in their own thoughts, pertain to the voyeuristic role of the viewer and the intimate moments of solitude we are witnessing.

'Seen Through Others' at Lafayette Anticipations

In March 2022, Cheng secured her first institutional solo exhibition in France, Seen Through Others at the cutting-edge Lafayette Anticipations.

Featuring over 30 works produced between 2016 and 2021, the collection–including Monroe (2020), Landline (2021) and Parapetto (2021)—continued her explorations into the shared experiences she has with friends and acquaintances, working from both life and sometimes from photographs.

Introducing Cheng's practice on the eve of this debut, Ocula Advisory remarked, 'The paintings, however, are never portraits in a traditional sense. Instead, Cheng isolates universal human experiences, creating studies of intimacy, desire, attraction, or loneliness'.

In 2019, Cheng won the coveted Baloise Art Prize at Art Basel for her solo presentation with the Parisian gallery Balice Hertling. The result of which led to her first institutional solo show at Berlin's Bahnhof Museum für Gegenwart.

Her auction debut at Christie's in November 2021 achieved measurable success, which saw her 2019 oil on linen work, titled Darling sell for 750% over its high estimate, at $300,000.

‘It is the artists who give power to the galleries; you have to think about how to help artists solve and simplify problems, so that they can fully concentrate on their creative output.’

Liu Ye, Louise Bourgeois, and Xinyi Cheng were among the auction highlights.

Among Paris's exciting new generation of artists, Xinyi Cheng is making waves with her otherworldly paintings.

Be among the first to know when new artworks and exhibitions by Xinyi Cheng are added to Ocula.
Sign Up Login