One of the most important artists of his generation, Erwin Wurm is internationally recognised for his unique way of having reinvented sculpture through performance, video, drawing and photography. In the 1990s, Wurm made a name for himself with the 'One Minute Sculptures', an ongoing iconic and now historical series of photographed performances in which he subjects his models or himself to paradoxical, cynical or absurd contortions and situations. Since then, he has been exploring ordinary decisions and existential issues, focusing on objects that help us to cope with everyday life and through which we define ourselves. All his work is constantly reinventing and demystifying the classical notion of sculpture, turned into a short living and performative experience to be shared collectively.

For his first comprehensive solo exhibition in a Taiwanese institution, Erwin Wurm unwinds the thread of a history started in Taipei in 2000, when he took part in the Taipei Biennial, The Sky is the Limit in 2000, curated by Jérôme Sans, and realised a famous series of 'Outdoor and Indoor One Minute Sculptures' in the streets of the city. The exhibition is a survey of twenty years of practice, presenting a body of work from 1996 to the present. Taking the Taiwanese capital as a starting point, 'One Minute in Taipei' is made in relation, for and with Taipei as a 'real cultural crossing' with Vienna, where the artist lives and works.

Erwin Wurm develops a new series of 'Indoor Sculptures' photographs featuring Taiwanese in improbable or accidental postures, confronting the fleetingness of life today with ephemeral performances. By showing the previous and new series together, he telescopes the contexts of his experiences with the city of Taipei and annihilates the distance between past and present, the inside and the outside. The photographs taken in 2000 create in this exhibition the environment and the context from which everything is developed, as well as the universe and spirit of his work.

Erwin Wurm focuses on works to be lived, enlarging the field of contemporary art by inviting the audience to share a moment together, reintroducing the notion of collective, relation and encounter into the realm of sculpture. Wurm stages the questioning of the individual in his relationship to the world and in his way of being by converting immediate moments related to human activities into sculpture. His work plays on the distortions of scale, the multiplication of formats, blurring what the size of a work is, as well as the notion of temporality of the gaze at a time when everyone has lost the notions of scale, space and time. Wurm’s long-standing interest in architecture, our 'third layer of skin' is expressed through the Performative Sculpture, a new series of physical performances on clay models of contemporary iconic Taiwanese architectural complexes.

Whether in the 'One Minute Sculptures or the Climbing Sculptures' performed or activated by the audience or the 'Word Sculptures' in which a word becomes a liquid sculpture ephemerally invading space during in the time of diction, all these works are symptomatic of an era of sociality in our contemporary world. Blurring the boundaries between performance and everyday life and the spectator and the participant, these situations present an appearance of idleness, gratuitousness and unproductiveness in a world where performativity is the rule, time is disappearing and everything is short living. Into Wurm’s cross-cultural approach, dancing, exercising, playing, drinking, reading and even psychological or philosophical issues could have sculptural qualities.

'One Minute in Taipei' is an interweaving of past and present contexts, of individual and collective experiences, a large reactivation of iconic performative sculptures, converging towards a unique aim: redefining, extending and twisting sculpture into a resolutely participative and playful medium, capable of questioning our way of being and looking at the world.

Erwin Wurm has held numerous solo exhibitions, at such prestigious venues as the Albertina in Vienna (2018); Centro Cultural Banco do Brasil in Sao Paulo (2017); Museum für Moderne Kunst in Berlin (2016); Center for Art and Architecture, Schindler House in Los Angeles (2016); the Bangkok Art and Culture Center (2015), and recently the Maison Européenne de la Photographie in Paris (until June 2020). He represented Austria at the Venice Biennale in 2017. His works have been acquired by numerous art museums, including the Guggenheim Museum in New York, the Vancouver Art Gallery, the Kunsthalle Bremen, the Kunsthaus Zürich, the Centre Pompidou in Paris, and the Peggy Guggenheim Collection in New York.

Jérôme Sans is an internationally renown curator, art critic, and director of contemporary art institutions. He was the co-founder and former director of the acclaimed Palais de Tokyo in Paris until 2006. He then moved to UK where he became the Director of Programming at the BALTIC Center for Contemporary Art in Gateshead, and from 2008 to 2012, he was the former director of the groundbreaking Ullens Center for Contemporary Art in Beijing (UCCA). Jérôme Sans is involved as well artistic director in several major urban projects, such as the Rives de Saône-River Movie in Lyon, and, from 2015 until 2017, the Grand Paris Express cultural project. He was recently appointed as artistic director of the future contemporary art foundation of the Ile Seguin developed by Emerige in the greater Paris region. Jérôme Sans is also co-founder of Perfect Crossovers Ltd., a Beijing-based consultancy for specific cultural projects between China and the rest of the world.

With his work on view as part of Vienna Art Week, Ocula Advisory checked in with Erwin Wurm to find out what he has been working on during the lockdown. 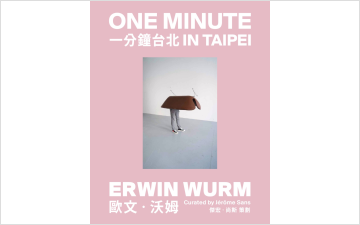 ONE MINUTE IN TAIPEI Erwin Wurm

Sign up to be among the first to know when new exhibitions by Erwin Wurm or at Taipei Fine Arts Museum open.
Sign UpLogin