'I have often been challenged for making images of traumatic situations that are so aesthetic and precisely composed,' Mendel said. 'But that is the intention.'

Gideon Mendel's portraits of ordinary people in the aftermath of climate disasters loom large in a new exhibition outside The Photographers' Gallery until May 2023.

Fire / Flood features scaled-up photographs from Mendel's ongoing 'Drowning World' and 'Burning World' series, and a film commissioned by the gallery that weaves together images from both. The works are displayed across a 46-metre-long frieze and several cross-street banners.

'The large-scale prints and huge video projection are positioned in a space that can draw the attention of people who would not normally enter a gallery,' Mendel told Ocula Magazine. 'So it fits perfectly with the activist element of my work.'

The exhibition includes portraits Mendel shot in Nigeria's Bayelsa State and Pakistan's Sindh Province after devastating floods, and images of people in Australia, Canada, Greece, and the United States who lost their homes to wildfires.

One portrait depicts Florence Abraham, a baker who employed around 25 people in Igbogene, Nigeria before floods destroyed her machinery, supplies, oven, and all of her personal possessions.

Abraham refused the gratuity Mendel pays his subjects, saying, 'I don't want your money. I want you to show the world what has happened to me.'

'For me that articulated so clearly what I can offer in this project; a deep and visceral witnessing of what these climate disasters mean in my subject's lives,' Mendel said.

Mendel defended the careful composition of his images, saying, 'through making beautiful images of lives so terribly disrupted by our global climate crisis, we can draw people to really look at them.'

Karen McQuaid, Senior Curator at The Photographers' Gallery, said Mendel's work has been on their radar for some time, and exhibiting it outdoors presented a powerful opportunity.

'Work on show in SPQ benefits from such a specific architectural and social context and near constant flow of people,' she said. 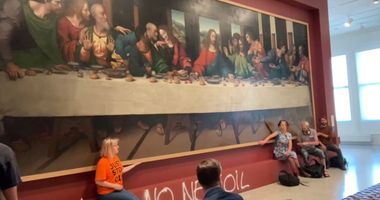 Climate protestors made headlines this year by gluing themselves to paintings and smearing food on them, targeting culture to garner attention for their cause, whereas Mendel said he is 'coming from the other direction', using culture to address the threat.

'In the controversy about these gallery actions, it is striking how much the right wing press has expressed horror about the minor risk to these paintings while hardly engaging with the immense risk posed to the future of our planet, and the lives of our children, by the climate crisis,' he said. —[O]

View What's On in the City Ocula News The Artists Leading Action on Climate Change During COP26 Glasgow, 8 November 2021