Between 1997 and 2008, the feminist biennial Womanifesto in Thailand sought to create networks in art and activism that enacted gender equity and socio-economic justice at a time when biennials in Asia were taking shape.

Through its gatherings, Womanifesto joined the interests of the rural poor and the urban middle classes while connecting women's issues with environmental activism and the need for economic redistribution. Thailand's male-dominated art scene, focused on individual genius rather than collective creativity, was addressed as part of broader structural issues producing urban/rural class tensions, as well as the nationalistic violence of incidents like the 2008 Preah Vihear border dispute between Thailand and Cambodia. For Crafting Communities at Hong Kong's Asia Art Archive (AAA) (16 July–30 November 2020), head of research John Tain charts the history of Womanifesto with a display of materials on loan for a digitisation project to be launched in autumn. This profile of persistence starts with a jute-covered display board featuring a small publication for Tradisexion, a 1995 event credited with conceiving Womanifesto.

Six artists organised and participated in Tradisexion, including Nitaya Ueareeworakul, later the most committed among the group to organising the biennial. The publication's cover—a painting by Nitaya Ueareeworakul of two female nudes, backs turned, arms hidden, and legs locked—is representative of its contents. Artist statements and texts by writers explore conditions that the publication's editor Jittima Pholsawek describes in her poem 'No Entry for Women', as 'Born with regulations / No exceptions'.1

Sustaining Womanifesto's mission to enact change through civil society was hard work. Finding herself the biennial's sole organiser after Tradisexion, Ueareeworakul invited artist Varsha Nair, who moved from India to Thailand in 1995, to co-organise Womanifesto I in 1997. The first edition was staged at Baan Chao Phraya Gallery and Concrete House, the arts and community space where Tradisexion was held.

Nair and Ueareeworakul planned Womanifesto I to coincide with International Women's Day, as had been the case with Tradisexion. The exhibition featured 18 women artists—with nine from Thailand and nine from around the world—including Thai artists Pinaree Sanpitak and Phaptawan Suwannakudt, and Japanese artist Tari Ito.

Womanifesto I gained the support of the municipal government, and two years later Womanifesto II hosted 32 invitees. That event, staged at Saranrom Park in 1999, was co-organised by Ueareeworakul with Studio Xang, a community-based organisation for migrant children, which started as a hub for artist studios and art classes for children. Also involved was the Empower Foundation, an organisation that supports Thai sex workers, founded by sex work activist Chantawipa Apisuk, the partner of performance artist Chumpon Apisuk, who started Concrete House.

Documents from Womanifesto I and Womanifesto II, displayed alongside the Tradisexion book, are dominated by skin: images of hands and arms bring attention to the body's protective barrier, which affords connection through touch. Tari Ito is at the centre of the press clippings and photographs, performing Self-Portrait (1996) at Womanifesto I. The self-identified lesbian artist pulls at a latex suit, fighting her own skin.

A review of Womanifesto II on display recounts Ito's Me Being Me (1998/1999), a follow up to Self-Portrait performed two years later. As in 1997, she 'donned a transparent rubber outfit,' but this time 'performed "oral sex" on a rubber "vagina" hung from a tree'—'too graphic, too unsubtle,' critic Phatarawadee Phataranawik quips in her article 'Sister in Arms'. In another article by Phataranawik on view, titled 'Great Leap Forward', the subheading, 'understanding women is a difficult task, even for women themselves', shows how Womanifesto cultivated difference among women by provoking discussion.

In her contribution to Tradisexion's publication, Womanifesto I participant Suwannakudt tells of the divisions among women in 1995, when the Thai government announced it was adopting the Beijing Declaration and Platform for Action for women's rights from that year's United Nations World Conference on Women: 'some . . . are glad, some pay no attention, yet others oppose.'

Writing on women's social movements in Thailand, scholar Amara Pongsapich has highlighted the 1990s shift from the politics of 'representative democracy', responsible for the People's Constitution (1997–2008)—Thailand's eighteenth, once heralded as its most democratic, then accused of preparing the way for authoritarianism—to the 'dialogic democracy' of civil society efforts.2 Womanifesto's efforts were part of this shift.3

Suwannakudt participated in four editions of Womanifesto, including the ten-day Womanifesto Workshop in Si Saket province in 2001. Conceived as a ten-day 'talkfest',4 less about making art than about conviviality and exchange, the community-based workshop at Boon Bandarn Farm, the family farm of male artist Maitree Parahom, engaged 18 Thai and international invitees in activities with artisans and students from the area.

Enjoy (2001), a photograph of women swimming taken by Chinese artist Yin Xiuzhen during the 2001 event, is enlarged by AAA to emphasise the joy of togetherness. Video documentation by Lawan Jirasuradej shows dancing, music-making, singing, cooking, portfolio-sharing, and weaving. There is Vietnam-based Finnish artist Maritta Nurmi laughing at mistakes in her weaving; Yoshiko Kanai building a voluptuous earthwork amid tall grasses; and Thai ceramic artist Surojana Sethabutra building a mud kiln for participants to fire clay vessels.

Together the artists observe cows, earthworms, pigs, and crabs and make offerings of rice packets and fruit to Buddhist monks. At sessions with students from area schools, the mantra is: 'If you have an artistic mind, you'll succeed at everything you do.'

Another display area continues AAA's emphasis on the biennial's exploration of alternative formats: Procreation/Postcreation, a limited-edition publication created in 2003 through an open call for artists and non-artists across genders, and No Man's Land, a web project launched in May 2005 after a call-by-invitation asking for reflections on nationalism, resulting in 73 artist projects viewable online.

The 88 contributions to Procreation/Postcreation were published as loose leaves of images and text contained in a cardboard box. In the AAA display, an open album shows photographs of bodies in performance at the Bangkok launch of the publication.

Above the album, a board pinned with ephemera and examples of contributions includes documentation of a work by Womanifesto I and II participant Sanpitak titled Noon-Nom (2001–2002) after a Thai phrase that evokes nestling at the breast. An image of the room-size installation installed at the Bangkok University Art Gallery a year earlier, shows Noon-Nom comprised pillowy breast-like forms in synthetic organza, a sheer fabric used in wedding dresses and in plant care to collect seeds and protect blooms.

Playing on a box monitor positioned amid the books on the AAA Library bookshelves is artist Lawan Jirasuradej's video Hands in the Coop (2001), which generates an evocative combination of signifiers. Sequences circle over hands that draw, then weave, a large sculpture in the form of a vessel within a vessel.

The lasting image from the juxtaposition of Jirasuradej's and Sanpitak's works is of soft power through tactical embeddedness: an allegory of politics for love and justice against coercion—or as the press clipping in the display on No Man's Land proclaims, 'borderless crossings' that rally against the 'obliteration of difference'.

For instance, the decision to hold the Womanifesto Residency between 12 October and 15 November 2008 in the impoverished and contested Si Saket province, despite the threat of border violence, demonstrated co-organiser Ueareeworakul's commitment to critiquing what she called, in her Tradisexion text, the cliché of rural society as 'simple and lonesome'—a place to abandon for the seductions of consumerism in cities.

Attitudes and practices looking to change such perceptions are the focus at AAA, with textile-based works created during the 2008 residency situating self-transformation and friendship as the conceptual and spatial core of the exhibition. Togetherness & The Way We Were (2008) shows two of six woven portrait mats that were made for each participant in the residency by Thai artist Onanong Glinsiri. At AAA, these portraits capture the artist herself and co-organiser Nair.

Tunic (2001) and Farm Stories (2008) are embroidered and sewn by farmer Pan Parahom, a fellow resident who taught Glinsiri how to weave. Referred to as 'blinds' for their use to block light coming through doorways, each Farm Studies blind portrays a tree growing from undulating ground. In one, a woman stands across from a bird positioned ambiguously atop a bird cage. Pholsawek's Tradisexion poem resounds with this image of constraints: '. . . prohibitions / Are only women's responsibility.'

In a discussion that was part of the online exhibition tour on 12 August 2020, Nair spoke of a home for the Womanifesto archive that Ueareeworakul is building at her family farm, and of 'mushrooming gatherings' around the world that Womanifesto is conceiving for the end of the year. As Nair assured her virtual interlocutors, Womanifesto's experiments with togetherness, exploring 'what it means to be women and what it means to be artists', persist.

In this light, Crafting Communities is not just an exhibition. It is also AAA's own attempt to be part of Womanifesto's project—to learn from the materials it stewards to build communities, and foster exchange at a critical time in Hong Kong.—[O]

1 The publication cannot be read at the exhibition but translations of a selection of its texts are available online through the journal, Southeast of Now: Directions in Contemporary and Modern Art in Asia, Volume 3, No. 1 (March 2019), https://muse.jhu.edu/article/721049 Crafting Communities considers the history of Womanifesto, a feminist biennial programme active in Thailand from 1997 to 2008, highlighting the central role played by pedagogy. Debuting as an exhibition that featured eighteen artists from ten 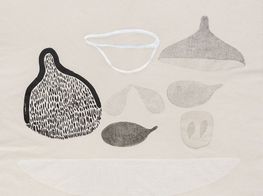 Widely known for her 'breast stupa' motif, Thai artist Pinaree Sanpitak is equally known for her fluid transitions between ideas and mediums, constantly building on prior works and concepts. The critically recognised conceptual artist is often