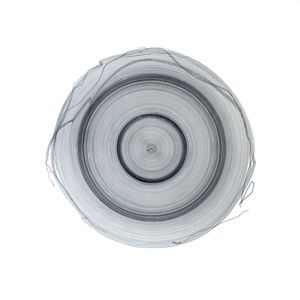 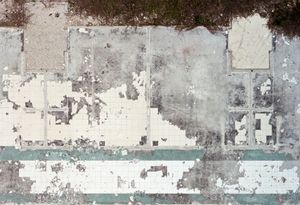 Natural Phenomena and the broader context of General Ecology are critical areas of interest in contemporary discourse and culture. All three artists share an interest in themes of habitat, changing patterns of place and the space that we occupy in an evolving environment.

Jill Baroff's (USA b.1954) Tide drawings interpret data recorded for forecasting tides. Collected at various geographic locations and at different times, these works plot shifts either as linear, grid or circular arrangements. Oen depicting moments when phenomena such as large storm surges dramatically alter otherwise repetitive patterns. In this instance, the work's tidal data was recorded at the tidal river Elbe, specifically at Hamburg harbour. Rendering data collected before the arrival of a highly unusual cyclonic storm. Drawn by hand on Japanese gampi paper, the artist mounts the tissue paper-thin drawing onto large sheets of cotton-based paper. During the mounting process, the drawing is suspended in a water bath before being lied out onto the support, affording the artist a brief moment to allow the drawing to tear open at its outer edge, implying the destruction caused by the approaching storm surge.

Similar works by Jill Baroff form part of the collection of the Hamburger Kunsthalle and Folkwang Museum Essen.Clay Ketter's (USA/SE b.1961) large-scale photographic Gulf Coast Slabs Series depicts traces of homes swept away by Hurricane Katrina along the Gulf Coast of the United States. Despite the sociopolitical context, which the works imply, the particular painterly appearance of these ruins first attracted the artist's attention. Photographed with an analogue camera from a mobile crane, employing a camera built for the specific purpose: capturing the remains as a flat photographic image, largely void of perspective or digital manipulation. The works showcase the clear geometric structures that formed the arrangement of these buildings. Their composition sharing an uncanny similarity with American Abstract paintings.

Photographed a year after its destruction, Miramar 4 depicts the remains of an old people's facility, built a mere stone's throw from the coastline, a place utterly unsuitable for human habitation, prone to flooding and swamp-like conditions, the vegetation reclaiming the destroyed building. The series formed part of numerous museum exhibitions, described as a record of a modern Pompeii. These large-scale prints and their unfamiliar vantage point draw on preceding suites of photographic works by the American/Swedish artist.

Susan Morris (UK, b. 1962) set of six Jacquard tapestries entitled 'Silence (Project for a Library) No 1 to 6' are woven directly from an ambient sound recording, taken in the garden outside a library. The sound recording is configured to the 'score' for John Cage's 1952 Lecture on Nothing, a spoken word performance that has silence at its core. These works are related to a series of large-scale Jacquard tapestries, each 210 x 280 cm recently commissioned by St John's College, University of Oxford, for permanent display in their new library and study centre.With this suite of tapestries, Morris continues her study into the process that informs human behaviour and how these are influenced by the spaces we occupy and the conditions we encounter. Another Tapestry by Susan Morris is part of the forthcoming exhibition "The World Is In You" at the Kunsthall Charlottenborg in Kopenhagen, Denmark, opening September 30 (until January 16, 2022).