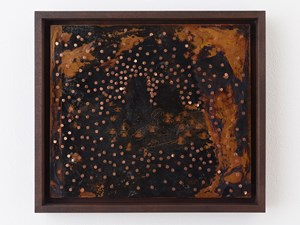 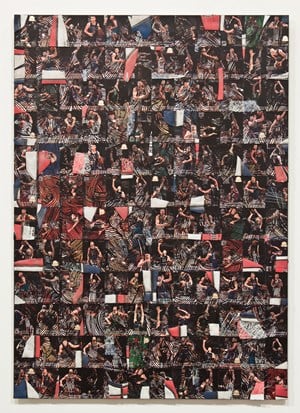 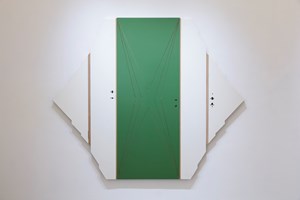 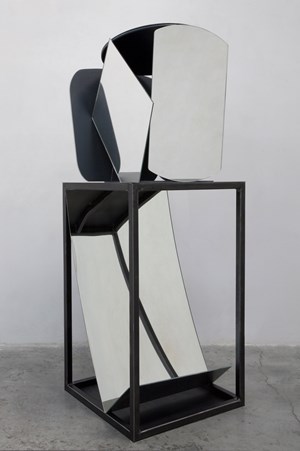 Mary Corse’s minimalist paintings are created by incorporating reflective glass microspheres, a process she has developed over the last five decades. Associated with the Light and Space painters of 1960’s California, Corse’s work both embodies and defies this male-dominated movement that focuses on the subjective experience of light and color, and thus, visual perception. Best known for her white paintings, Corse’s application of the paint emphasizes the multi-chromatic visual effect created in the contrast between the glass beads and her textural brushwork. Each visual experience is therefore uniquely dependent on the viewer’s engagement and physical interaction with each painting.

Nari Ward and Liu Wei will each present sculptural works made from found materials selected for their thematic possibilities. Ward’s Scape (2012) is comprised of shoelaces installed directly into the wall in the shape of a fire escape ladder, a signifier of the urban landscape. Shoelaces have become a common medium for Ward, who often uses repurposed, common, or castoff objects as the base of his sculptures. Formally, the shoelaces act as a line, facilitating Ward's interest in drawing and mark-making. “The laces, for me, are a way of bringing a different kind of movement and intensity into the piece,” Ward says, emphasizing how the non-traditional materials he uses become intimately linked to the narrative content of the finished piece.

Liu Wei’s work often utilizes industrial materials and forms in an abstract manner to offer insights into the complexity of the human condition. His sculptural work repurposes salvaged demolition debris in order to call attention to the accelerated urbanization and construction typical of the artist’s home cityscapes of China. In Exotic Lands No. 21 (2013), Liu Wei repurposes industrial doors in order to highlight the simplistic beauty in basic and typically commercial elements. The artist’s Puzzle series, assemblages of mirrors in overlapping and irregular geometric forms, transforms the original purpose and context of the mirror and ultimately distort the viewer’s perceptual experience.

Together, these three artists demonstrate how the materials used in art production can have aesthetic or formal implications while also providing a narrative framework within their practice.

About Lehmann Maupin
Founded in 1996 by partners Rachel Lehmann and David Maupin, Lehmann Maupin has fostered the careers of a diverse group of internationally renowned artists, both emerging and established, working in multiple disciplines and across varied media. With three locations—two in New York and one in Hong Kong—the gallery represents artists from the United States, Europe, Asia, South America, Africa, and the Middle East. Known for championing artists who create groundbreaking and challenging forms of visual expression, Lehmann Maupin presents work highlighting personal investigations and individual narratives through conceptual approaches that often address such issues as gender, class, religion, history, politics, and globalism.

Sign up to be among the first to know when new exhibitions by Mary Corse, Liu Wei, Nari Ward or at Lehmann Maupin open.