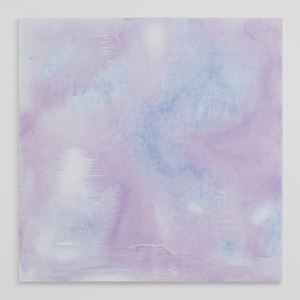 Lisson Gallery is pleased to present work by Shirazeh Houshiary in East Hampton. The exhibition coincides with the opening of a solo exhibition of work by the artist at Lisson Gallery in Shanghai (September 11–October 24, 2020). As Time Stood Still is her first presentation in the Chinese city, and encompasses a series of new works created and inspired by the artist's experience of lockdown in the UK, where she is based. As with much of her work, these concurrent exhibitions are deeply personal and philosophical, exploring profound questions about perception and imagination, as well as the fundamental power of beauty.

In the painting on view in East Hampton, Only a Flicker (2016), a string of tiny penciled words overlay diaphanous clouds of light blue and violet pigments. To create these paintings, a mixture of water and pigment is poured onto the surface of the canvas to produce an enigmatic ground punctuated by pooling sediment and irregular apertures. Each word is precisely written, but they cumulatively become illegible, weaving around the picture plane to create intricate webs, which are then further interlaced with pigment. The ethereal atmosphere created within the painting defines the core ideas at the heart of Houshiary's practice—striving to capture the intangible essence that underlies existence through the embodiment of profound abstract concepts.

Since its inauguration this summer, Lisson Gallery's 1,000 square foot East Hampton space has presented exhibitions focused on both seminal, historic artworks and premiered new bodies of work. Previous artists on view include Stanley Whitney, Carmen Herrera, Anish Kapoor, Van Hanos, Joanna Pousette-Dart and Sean Scully. This focused format, in an intimate setting, recalls the origins of Lisson Gallery, which was established in 1967 in a storefront window on London's Bell Street. The Long Island location of the new space joins Lisson's two other galleries in the New York area, including the recent expansion to a second location on West 24th Street in Manhattan's Chelsea neighbourhood.

Sign up to be among the first to know when new exhibitions by Shirazeh Houshiary or at Lisson Gallery open.