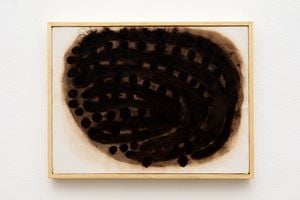 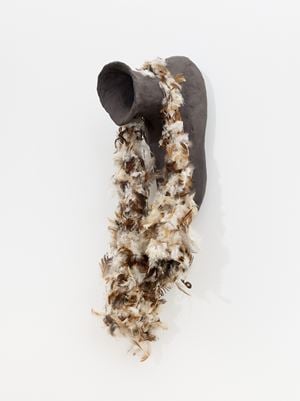 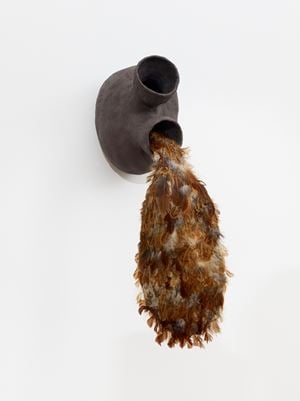 Mendes Wood DM Brussels is pleased to present In the Sun and the Shade, the first European solo show of works by the Brazilian artist Solange Pessoa, coinciding with her acclaimed first solo institutional exhibition in the United States, currently on view at Ballroom Marfa.

Utilizing the entirety of the Brussels gallery space, the show includes a new body of biomorphic ceramic sculptures, a series of genipap paintings (2013–2017) as well as the new triptych Primavera Bêbada (English: Drunk Spring) (2019). The exhibition also showcases new sculptures made from cement and moss, as well as Pessoa's long-conceived installation, comprising of three large bronze reliefs and grapes. Occupying an entire room on the first floor of the gallery, this work is closer in scope and complexity to Pessoa's museum installations.

The exhibition also debuts Pessoa's most recent video work Lonjuras (2019), a culmination of footage that the artist has collected since 2012. The title refers to an expansion of time between two points - a designation of immense distance. Through her documentation of terrestrial elements, Pessoa points to a gap in time, drawing our attention to things that pre-existed long before any utterance of civilisation on Earth. It is through this video work that Pessoa ties together the evocation of the primordial, mythical times that play out in the exhibition.

Pessoa's expansive practice draws inspiration from a plethora of sources: archaeology and ancestry, the history of her land and the ancient civilisations that made their mark on it, ancient pictographs and traditional craft, Brazilian Baroque and poetry. These and many other references simmer under the surface, underpinning an artistic career that spans over three decades and comprises of sculpture, installation, painting, drawing and video.

The rich and varied landscape of her native Minas Gerais, a state located in south-eastern Brazil, where the artist lives and works, has engendered in her a continuous fascination with nature. The result of this deep bond with her surroundings are her telluric works, often composed of organic and unconventional materials including hair, grass, fruit, feathers, minerals, moss and much more.

Her earlier series of paintings (from 2013-2017) on view have been rendered with genipap paint, made from a tropical fruit used by indigenous people since ancient times. Here, primordial memory is Pessoa's guiding output; the graphic essence of organic forms in these compositions, as well as in her large painting Primavera Bêbada (2019), recall those of historical cave paintings. It is in this way that Pessoa simultaneously evokes parietal art and Modernist paintings.

With the use of organic matter that can be found in her paintings as well as in her sculptures, there is a sense that Pessoa has allowed nature to take its course and ultimately take over her work. This is particularly felt in her sculptures, where there is an evident blurring of lines between art and nature, a confusion Pessoa relishes.

It is important to understand that Pessoa's scope is not reduced to the aesthetic field alone; for her the natural environment is not merely there to be imitated, instead it constitutes an experience that she irrevocably mediates through her art. The interplay between nature and imagination creates a double landscape—both a visual impression and an imaginative mindscape. Her work straddles the border between the real and the unreal, visual and illusion, the conscious and the unconscious.

Duality is a recurrent trope in Pessoa's oeuvre and inextricably connects her long-standing practice to the Brazilian Baroque tradition. The title In the Sun and the Shade is inspired by the poetry of Brazilian writer and fellow Mineiro, Paulo Mendes Campos, and draws attention to the stylistic dualities that can be found across the artist's practice. Her challenging combination of sensual, organic materials, such as hair, moss and fruit, with solid materials, such as bronze and ceramic surfaces, create an aesthetic of contrasts that evoke darkness and light, hardness and softness, excess and dearth.

In the Sun and the Shade 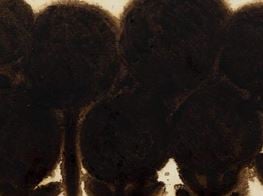 Mendes Wood DM Brussels is pleased to present In the Sun and the Shade, the first European solo show of works by the Brazilian artist Solange Pessoa, coinciding with her acclaimed first solo institutional exhibition in the United States, currently on view at Ballroom Marfa. Utilizing the entirety of the Brussels gallery space, the show includes... 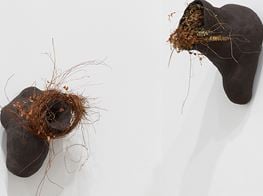 One of the most striking things about Brazilian artist Solange Pessoa’s exhibition In the Sun and the Shade at Mendes Wood DM is how effectively it intersects with both the natural world and its local setting. The former was to be expected: Pessoa’s paintings and sculptures often feature natural materials—including leaves, roots, eggs... 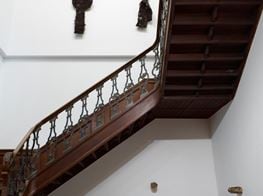 Related Press Solange Pessoa’s Connection with the Culture of the Land 19 February 2020, Whitewall

In the Sun and the Shade is currently on view at Mendes Wood DM Brussels through April 4. It is the first European solo show of Solange Pessoa and coincides with her Ballroom Marfa exhibition Longilonge. The Brazilian artist’s new ceramic works, cement and moss sculptures, and genipap paintings fill the gallery, which also features the video...

Sign up to be among the first to know when new exhibitions by Solange Pessoa or at Mendes Wood DM open.