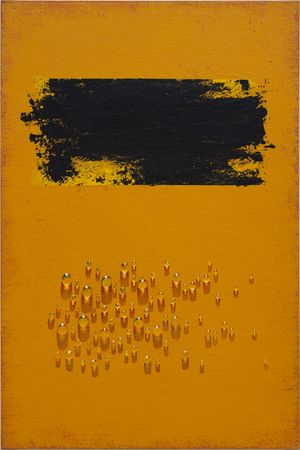 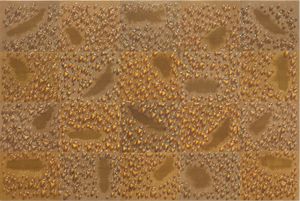 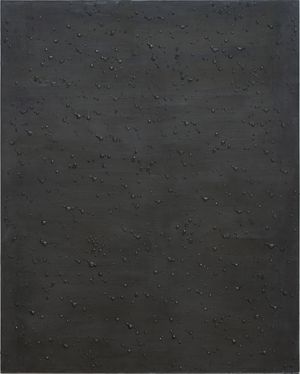 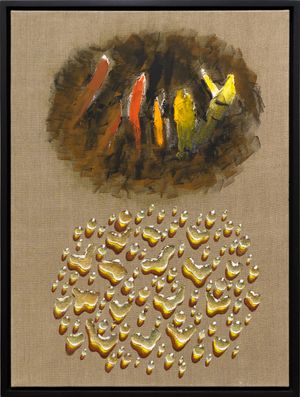 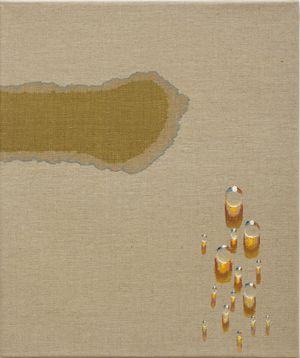 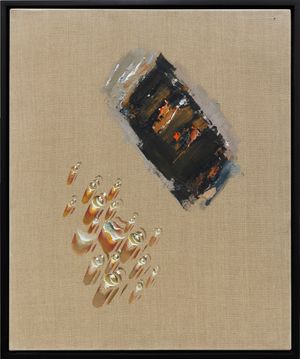 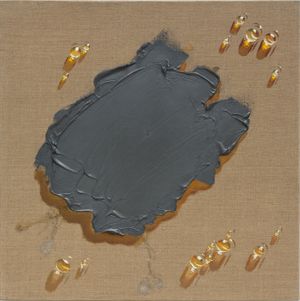 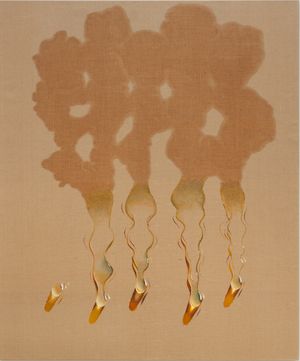 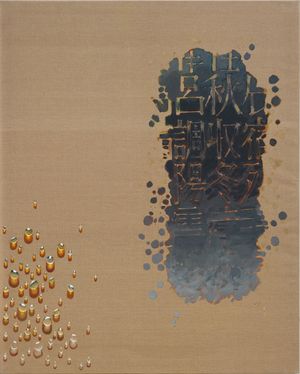 Tina Kim Gallery is pleased to present its second solo exhibition of Kim Tschang-Yeul (1929–2021), The Stillness of Water, on view from 10 September through 16 October, 2021. The exhibition focuses on Kim's different modes of forms and media through the artist's experimental paintings that were mostly produced between the 1980s and 90s. In 2019, the gallery presented Kim's first solo exhibition with works from the 1960s to 1980s. This 2021 exhibition continues to follow his work chronologically, engaging with sides of Kim which have yet to be fully investigated and digging deeper into the nuances of his practice. The exhibition will carefully examine the evolution of the artist's signature motif: the drop of water.

Kim Tschang-Yeul is one of the prominent first generation of modern artists, who underwent the turmoil of postcolonial liberation and the Korean War. Born in Maengsan in North Korea, Kim spent his youth learning calligraphy from his grandfather and studying a series of world art collections that his uncle sent him from Japan. After studying painting at the Seoul National University, Kim became a leading member of the Korean avant-garde and co-founded the Modern Artists' Association (later renamed Actuel in 1962) in 1958. Early in his career, Kim took on radical practices through limited resources such as Michel Tapié's Un art autre, and adopted the Korean Art Informel movement. As an avid reader, Kim was also deeply interested in literature and philosophy, in which he embraced the ideas of Taoism and Zen Buddhism. From 1965 to 1969, Kim studied in New York where Pop Art and Abstract Expressionism prevailed and began his earliest experimentation with globular abstract forms. Ultimately settling in Paris in 1969, Kim created a cultural bridge between the Korean and European art world, often hosting his native counterparts including the Dansaekhwa masters, Park Seo-Bo, Lee Ufan, and Chung Sang-Hwa.

Kim Tschang-Yeul has mentioned, 'Paris is different from New York [...] Here various trends coexist. The ambiance in Paris gave me the strength to show my work.' With his sensibility of East Asian roots and exposure to influences of the French Informel, Pop Art and Abstract Expressionism from New York, and Surrealism and Dadaism from Paris, Kim began producing opaque, phlegmatic forms that appear to ooze out through the canvas plane in 1971. Navigating between different modes of transcontinental art movements that he gleaned from home and abroad, Kim unveiled his first waterdrop work, Événement de la nuit (1972), the following year, at Salon de Mai in Paris, France.

Since then, Kim devoted his life-long career to depicting the drop of water, allowing him to confront and absolve his ego. Such an idea of removing his ego is very close to Taoism and Zen Buddhism, for Kim has often credited the discovery of the water drop partly to those influences. Lifelike yet mystical, each motif embodies an abdication of the self. It also mirrors the artist's memories of war and acts of meditation. As Kim comments, 'To paint water drops is to erase all memories, all evils, and the anguish [to be] destroyed with water.'

Although Kim's oeuvre may be defined by the water drop, the iconic imagery is not a singular aesthetic decision, but a continuous paradigm leveraged over time in a plethora of outcomes. Kim mastered airbrush techniques to achieve a level of control he needed in visualising the motif on raw canvas. In consequence, the trompe l'oeil fixes the aqueous orbs through his manipulation of light and surface. Still, Kim purposely avoided his drops in hyperrealism, which naturally led him to find new canvas supports such as jute, sand, wood, and newspaper. Thus new dialogues between the drops of water, backgrounds, and materiality fortified different experimental approaches for the artist.

1979 can be considered a turning point for Kim Tschang-Yeul, as he began transitioning away from utilising strictly airbrush techniques. For Kim, the initial purpose of using airbrush was twofold: to remove himself from the canvas while obtaining mechanistic water drops. Yet he felt the urge to achieve an adherence between his iconic motif and the screen. As if to decisively integrate his presence on the canvas surface, he began incorporating paintbrush work to engender the pictorial formativeness of the motif itself. Beginning in the 1980s and so on, the water drops became fuller and more diverse in their forms, scales, projections, and compositions, with blots appearing more abundant. In the work Waterdrops (1983), the duplicated droplets, which are depicted in a demarcated background, protrude out of each section with their translucency rendered in a vivid contrast of light and shadow. The images of stains gently denote the artist's intensified touch and calligraphic strokes; each element in the work expresses notions beyond simple representations of water drops.

Kim Tschang-Yeul further integrates new elements traditionally unseen in his practice as evident in Waterdrops (1995), in which a flat patch of black paint disrupts the trompe l'oeil. He would also introduce a thick cloud of colourful pigments in the work Waterdrops (1996), their impasto weighing heavily on the upper left corner of the canvas. In a diagonal yet balanced composition, glistening water droplets are sitting at the other pole of the surface. Often incorporating his repeated motif of Thousand Character Classic that profoundly resonates both his childhood memories and his Taoist philosophy, Kim persisted in greater variety in relation to his signature motif, while still acknowledging insurmountable barriers of a two-dimensional painting. Yet such experimentations delineate a complex confluence of his physicality and enlightenment in perpetuity. In Kim's words, 'Painting for me, is to show something different, something that is made by hand, and manages to move people. But it is also intellectual play and an act of meditation and prayer.'

It is an honour and a privilege to exhibit the work of Kim Tschang-Yeul, and Tina Kim Gallery would like to commemorate his legacy by presenting a holistic vision of Kim's discipline. His water drops, the depths and waves of his practice and career, define the highest qualities one can achieve through artistry.

Kim Tschang-Yeul was born in Maengsan, Korea in 1929 and graduated from the College of Fine Art, Seoul National University in 1950. Kim co-founded the Modern Artists' Association—later renamed as Actuel—in 1958. As one of the first generation of modernist painters, Kim participated in the Paris Biennale in 1961 and the São Paulo Biennale in 1965. In 1996, Kim was bestowed with the French Order of Arts and Letters followed by the National Order of Cultural Merits of Korea in 2012. The artist participated major international group exhibitions such as Korean Contemporary Painting Exhibition, Paris, France (1971); Salon de Mai, Paris, France (1972-76); Korea: Facet of Contemporary Art, Tokyo Central Museum, Tokyo, Japan (1977); and Korean Drawing Now, The Brooklyn Museum, New York, USA (1981). Kim's significant retrospectives were held at the Gwangju Museum of Art, Korea (2014); National Taiwan Museum of Fine Arts, Taichung, Taiwan (2012); National Museum of China, Beijing (2005); and Jeu de Paume National Gallery, Paris, France (2004). In honour of the artist, Kim Tschang-Yeul Museum was founded in 2016 in Jeju, Korea, in which the museum has showcased a number of exhibitions including Traces of Existence (2016), Récurrence (2018), and currently, Dreaming Water Drops (2021). His works can be found among the collections of numerous institutions including the National Museum of Contemporary Art, Korea; Leeum, Samsung Museum of Art, Korea; Centre Pompidou, Paris, France, Tokyo Metropolitan Museum of Art, Japan; National Museum of Modern Art, Japan; Hirshhorn Museum and Sculpture Garden, Washington, USA; and Museum of Fine Arts, Boston, USA.

The Stillness of Water