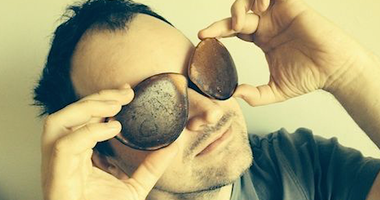 A multidisciplinary artist, who represented Romania at the 53rd Venice Biennale in 2009, Ciprian Mureşan's diverse practice includes installation, drawing, video, and sculpture. His works embody a humorous sense of irony and a critical view on socio-political history.

In his practice he often deconstructs and recontextualises the works of notable literary and historical figures and through this process projects an urge to critique and intervene. His work shares an affinity for historical issues and a critical approach to ideologies and organisational political systems. Using humour and irony, he is also concerned with interpretations of the conventions of conceptual art.

Ciprian Mureşan was born in Dej, Romania in 1977. A child of the 1989 Romanian revolution, he became greatly influenced by the political shifts of his homeland, the fundamental changes in power and the effects of the turmoil of everyday post-soviet life.

Mureşan's works are filled with references of the effects of the post-communist politics and the effects of global capitalism on social culture. In his exhibition Incorrigible Believers (2018), he presented drawings on glass that were transparent and cracked; book drawings and large wall painting depicting the Last Judgement that moves back and forth, all twisted references to Christian art and his way of criticising the institution of Church or Religion and a history that is falling apart. His 'Pioneers' (2010) series – a collection of sketches of children sniffing glue- refers to the scandalous revelation in Romania that homeless children were sleeping in sewage passageways; a sign to symbolise Romania's failed transition to capitalism.

In his work entitled Communism Never Happened (2006), he cut out the work's title from vinyl records that contained voice recording of the big mass events of the Ceauşescu-period, the 'Singing Romania' propaganda gala evenings.

In many of his works Mureşan reinvents canonical literary, cinematic, and artistic works demystify and destroy their iconic characteristics and reinvent his own versions.

In talking about creating works that reference other artists in an interview with Ocula Magazine in 2015 he states: 'One of my constant preoccupations in my practice is my relationship with art history. Perhaps it is for this reason that I created, instinctively, mechanisms through which I relate to art history in less 'classical' ways.'

In his work entitled Leap into the Void, After three Seconds (2004)—a large black and white gelatine silver photograph—he adds a dark twist to Yves Klein's 1960 photograph of a man suspended in mid-air having leapt from a window. Mureşan took this image and transported the scene to a similar looking street in the Romanian city of Cluj-Napoca, a site not far from where Romanian revolution took place. His image depicts a man is sprawled on the pavement three seconds after the fall, the artist's reference to the political failure of his homeland and the post-communist condition.

Ciprian Mureşan represented Romania at the 53rd International Art Exhibition of the Venice Biennale in 2009 and has also taken part in the 17th Biennale of Sydney. His works have also been presented in some of the world's most important institutions such as the Neuer Berliner Kunstverein in Berlin, the Centre Pompidou in Paris, the New Museum in New York, and Tate Modern in London.

He lives and works in Cluj, Romania.

We were the first generation of artists who started working after the fall of communism, although we did live those times as kids or teenagers. This made the experience close enough for us to reflect on it.

Be among the first to know when new artworks and exhibitions by Ciprian Mureşan are added to Ocula.
Sign UpLogin