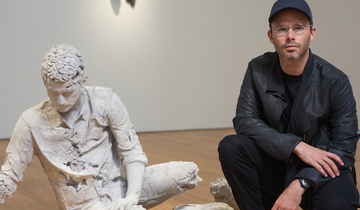 Raised in Miami, Daniel Arsham studied art at The Cooper Union in New York. He graduated and received the Gelman Trust Fellowship in 2003. His ensuing practice has crossed the disciplines of drawing, film, sculpture, installation, and architecture, playfully historicising the tangible cultural and material icons of the contemporary era.

Arsham's sculptural work presents eroded casts of various objects from the late 20th and early 21st centuries. The casts, made from geological materials like sand, selenite, and volcanic ash, appear as if artefacts unearthed after being buried for centuries—haunting future relics of the contemporary.

Arsham's chosen objects for simulated ahistorical fossilisation include older televisions, cameras, and boomboxes that highlight the acceleration of technological obsolesce in this digital age. He also presents casts of soft toys, clothing, basketballs, books, and even full-scale luxury cars. Additionally, human figures in contemporary outfits appear, in various states of decay, from fragments to whole fossils—evoking discoveries at sites like Pompeii.

Architecture is another core element of Daniel Arsham's practice, where the artist often plays with the architectural environment of the gallery. In several works, artefacts and objects intersect with exhibition walls. The analogue clock in Falling Clock (2011), for example, appears to have been lodged into a softened gallery wall. He also constructs surreal architectural environments, such as the monochrome Japanese zen gardens of Blue Garden (2017) and Lunar Garden (2017).

Beyond the gallery walls, Daniel Arsham has collaborated, since 2007, with Alex Mustonen on 'Snarkitecture': a highly acclaimed design practice. In 2014 he established 'Film the Future', creating films set in a fictional future. He has also created set designs for the Merce Cunningham Dance Company; signed to Adidas; collaborated with Dior and Pharrell Williams; and in 2020 he became creative director for the Cleveland Cavaliers NBA team in his home state of Ohio.

Daniel Arsham's art has been shown in commercial contexts as well as gallery and institutional shows worldwide. His works feature in major public collections, such as the Centre Pompidou, Paris; Institute of Contemporary Art, Miami; Walker Art Center, Minneapolis; and the National Museum of Qatar, Doha.

Ocula News Who Are the Most Followed Artists on Instagram? Tokyo, 10 February 2022 Takashi Murakami cracked 2.5 million followers this week, but he's a long way behind the most popular artist on the platform.

Read More Ocula Photolog Daniel Arsham at UCCA Dune Against the backdrop of the natural, geological features of UCCA Dune, Daniel Arsham: Sands of Time stages recent sculptures and related drawings that expand upon his fascination with history, relics of the past, and idea of a 'fictional archeology.'

View More Ocula Conversation Daniel Arsham By Diana d'Arenberg, Hong Kong I was just watching the archeologists work, and I started to think about the kind of fictional nature of archeology. You know, in that inherently there’s no way to determine exactly what occurred.