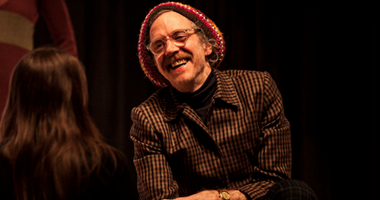 Martin Creed's playful and deceptively simple artwork explores the distinction between art and the ordinariness of life. Creed is a conceptualist who uses elements of minimalism in his practice. His multidisciplinary practice ranges between installation, performance, sound art, sculpture, painting, and drawing.

Creed was born in Wakefield, Yorkshire. From the age of three, he was raised in Glasgow. In 1986, the artist studied painting at the Slade School of Fine Art in London. Following his undergraduate degree, Creed became disenchanted with painting. He felt the medium restrained his artistic expression, and took a break from painting for several years.

Throughout the late 1990s, Creed began to develop an experimental practice. His work became heavily conceptual and offered simplicity. He developed engaging installations intended to draw visitors' attention to things that they might otherwise overlook.

Martin Creed labels and identifies his artworks by numbers. By doing so, he gives each work equal status, irrespective of its material, shape, or size. Creed developed this distinctive approach to avoid decision-making and to explore the dilemma he faced of wanting to simultaneously make something and nothing.

The Ordinary and the Everyday

In Work No. 227: The lights going on and off (2000), Creed challenges traditional museum standards by manipulating the existing light fittings of the exhibition space. By seizing an empty room and switching the lights on for five seconds and then off for five seconds, Creed forms a new atmosphere that toys with viewers' experience and expectations. Viewers' impression of time and space is altered, and a focus on the physicality of the room comes into play.

Work No. 227: The lights going on and off (2000) is part of a wider series of work that aims to investigate the ordinary and the everyday. Creed's oeuvre praises the mundane by using materials like Blu-Tak, party balloons, and masking tape in his artwork.

Creed submitted Work No. 227: The lights going on and off for the Turner Prize at the Tate Gallery, London in 2001. He was awarded the prestigious prize and received £20,000 in prize money.

Intended for display at a height across the façade of a building, Creed's installation functions as a tool for the artist to communicate with his audience. Creed is prompting a reaction from viewers who try to decode his statement's ambivalent meaning. The use of neon—a raw gas that cannot be seen—plays into Creed's conflicting desire to create something and nothing from his art.

The work was originally commissioned for the Clapton Portico in Hackney, London. It has since been displayed at a number of other settings around the world, in countries including Italy, America, Scotland, and New Zealand.

In 2001, Creed was awarded the Turner Prize for his controversial work, Work No. 227: The lights going on and off (2000). In 2011, Creed participated in the Singapore Biennale and the Folkestone Triennial.

In 2012, Creed was commissioned to create Work No. 1197: All the bells in the country rung as quickly and as loudly as possible for three minutes (2012) for the London 2012 Summer Olympics.

Creed's artwork is included in the collections of the Museum of Modern Art in New York, The National Galleries of Scotland in Edinburgh, and the Tate Gallery in London, among others.

Martin Creed has exhibited his work in galleries and institutions across the world.

The works in the collection and in the 'Chaos' show reflect the actual reality of the world. I just felt that given what's going on right now, we needed to do a show like this.

I would like to make a work that doesn’t draw lines, and doesn’t separate people, places, and things. As I said, a work that has the whole world in it

Yorkshire Sculpture Park, Wakefield, questions what we know and understand about design through '[Re]construct', a group exhibition selected from the Arts Council Collection, including Martin Creed, Anya Gallaccio and Cornelia Parker.

Read More Related Press The year in, and beyond, the galleries of New York: A relatively concise chronicle of highlights and a top 10 list 23 December 2016, ARTnews

The great thrill for all of us right now is that, just 61, Kerry James Marshall has many more years of painting ahead of him.

West Bund is in a remote bit of Xuhui, a long way away from the Waitan (the Bund). It was once devoted to heavy industry and even had an airport, but now it’s an 8 km-stretch of arts precinct and the former aircraft factory is an art fair pavilion. The leases though are only for 5 years and the condos are already encroaching. Only 5? Yes, but...

Today, the video for Martin Creed’s Princess Taxi Girl Part 1 was released, off of the artist and musician’s newest album, Thoughts Lined Up, which came out last week on Telephone Records. Creed’s balloon-heavy exhibition The Back Door is currently on view at New York’s Park Avenue Armory through August 7.

Be among the first to know when new artworks and exhibitions by Martin Creed are added to Ocula.
Sign Up Login