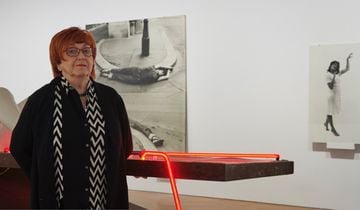 A pioneer in film, video and installation art, VALIE EXPORT has produced one of the most significant bodies of feminist art in the post-war period. Her groundbreaking films and performances in the 1960s and 1970s introduced a new form of radical, embodied feminism to Europe, examining the politics of the body in relation to its environment, culture and society. The multi-disciplinary nature of EXPORT's 'Expanded Cinema' practice and use of her own body as an artistic medium positions her as one of the earliest performance artists alongside Joseph Beuys and Allan Kaprow.

Through her artistic representations of the self, EXPORT questions the (female) body as signifier and bearer of information, challenging viewers by examining the politics of eroticism, the male gaze and liberation. In the Body Configurations she began in 1972, EXPORT uses her own body to visualise the internal accommodations made to nature, architecture and culture. Contorted in response to architectural landmarks or the natural environment, the artist undermines the physical boundaries between self and surroundings. As she explains, 'This analogy between scenic and bodily arrangements, these common forms of revealing mood, have served since the beginning of pictorial art as projection surfaces for expression: external configurations, whether they are in the landscape or in the picture [...] serve as the expression of internal states.'

VALIE EXPORT lives and works in Vienna, where she co-founded the Austrian Filmmakers Cooperative. Since 1968, she has taken part in numerous international exhibitions, including documenta 6 and 12 (1977 and 2007) and the Austrian Pavilion at the Venice Biennale in 1980. In recent years, the Staatliche Kunsthalle Baden-Baden (2020); Neue Berliner Kunstverein (2018); Lentos Kunstmuseum Linz (2017); Kunsthaus Bregenz (2011); Belvedere Museum, Vienna (2010); Israel Museum, Jerusalem (2009); and Centre Pompidou, Paris (2007) have devoted major solo exhibitions to her work. EXPORT has taught at a number of international institutions, including the University of Wisconsin, San Francisco Art Institute and University of the Arts in Berlin. From 1995–2005 she was professor of multimedia and performance at the Academy of Media Arts in Cologne. In 2019, she was awarded the Roswitha Haftmann Prize in recognition of her outstanding contributions to the visual arts.

With the purchase of her premature legacy, the VALIE EXPORT Center Linz was founded in 2015, laying the foundations for an international research centre for media and performance art.

Ocula Conversation VALIE EXPORT: ‘The voice belongs to me’ By Tessa Moldan, London VALIE EXPORT discusses some formative works in light of her current exhibition at Galerie Thaddaeus Ropac, which retages the artist's presentation for the 39th Venice Biennale.