Arario Gallery is pleased to present A Shiver in Search of a Spine, an exhibition of four German artists for summer 2019. This exhibition, comprised of four artists in their thirties who are active in Berlin, carves out a facet from the flow of contemporary formative art we are currently facing, and aims to create a narrow but long communicative vessel linking time-space between Korea and Germany.

Participants of the exhibition Sol Calero, Kasia Fudakowski, Petrit Halilaj, and Zora Mann, having actively developed bodies of work in their own unique formal languages, are showing their work for their first time in Korea. The artists have been actively participating in the international art scene, for instance Calero holding a solo exhibition at Tate Liverpool (2019), Fudakowski participating in the Istanbul Biennial (2017), and Hililaj participating in the Venice Biennale (2013). That these artists can present the potentiality of connecting the differences in their individual backgrounds and situations through visual imagery that penetrates here, now, this very instant, is clear.

Sol Calero creates works of painting and sculpture that utilize the structural elements of architecture. The exhibited work La Escuela del Sur (2015) stems from a critical analysis of the architectural style of Studio Voltaire in London. A building is a medium that physically symbolizes the establishment of a single organization, and can trace the process of the power structure that forms it. This work, which reinterprets the Victorian architecture of Studio Voltaire based on the visual culture of South America, the artist's birthplace, explores the process of how society appropriates particular cultures to form the governance of power.

Kasia Fudakowski presents 'Continuouslessness', a series connecting panels seemingly unrelated to one another. Fudakowski deliberately refutes the viewer's ordinary categorization and definition by juxtaposing images that intentionally appear to lack continuity, allowing for each panel to be arbitrarily deconstructed and newly reformed every time. Enlarged or reduced, even strangely familiar, the objects of the panels enable the viewer to write their own narrative, and the sharply paradoxal images read almost comically. Four new panels from 'Continuouslessness' made especially for this exhibition are introduced under the title A Punishment in Search of a Crime. The artist creates sculptural pieces such as empty waiting room chairs and shrimp caught in shower curtains to examine both the responsibility as a member of the collective to accept demands, and irrational social structures that restrict and monitor the individual's freedom.

Petrit Halilaj introduces 'Abetare', a series he has been working on since 2015. The artist takes the scribbling left behind on the desks of a school in his homeland of Kosovo, a country with a tragic war-torn history, and makes them into large-scale sculptural works. Quietly forgotten, through these students' scribbles, Halilaj's work can be read as an act of preserving our damaged or fading memories, or to take it a step further, of preserving the distorted records of a society's history, and tells us that there exists an utterly undeniable common history. Aside from the 'Abetare' sculpture series, for this exhibition the artist has also set up an onsite sound installation using the sounds of birds, an important source of his artistic inspiration.

Zora Mann presents Cosmophagy, a work based in her experiences during her childhood spent in Africa. Mann, who has also participated in marine conservation activities, created a curtain by recycling plastic slippers recovered from the shores and waterways of Kenya. The main source of pollution in the Indian Ocean, slippers recall the collective perception that mankind's desires can bring about irreversible environmental destruction. Also on show, Mann's shield series portrays the existence of supernatural and spiritual experiences behind the psychedelic and decorative patterns of indigenous peoples.

This exhibition's title comes from an anecdote about participating artist Fudakowski's artistic experience. The shiver felt by the artist was borne from a ghostly experience. The 'ghost' she encountered was the most frightening image she had ever seen, yet according to Fudakowski, she was captivated by that fear. Is the shiver she speaks of not the supernatural phenomenon known as a ghost, but a meaningful allegory for the shiver on our spine felt when we realize the existence of that something that, unbeknownst to us, encroaches upon our daily lives?

While simultaneously influenced by myriad artistic references unable to be gathered into a single entity, the participating artists unravel images entangled in varying social identities and politics of order with unforeseen sense. Artists who have seen what should not be seen, witnessed what they did not want to see, who know the fear of a situation unable to be returned to its unseen condition, just like a ghost they draw us into unfamiliar experiences that split open a crack in everyday life. Summer, when searing sun and pitch dark coexist, the shiver that will arise in our lives—we hope that you may experience this through this exhibition.

A Shiver in Search of a Spine 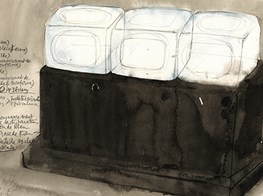 Related Press The Shows to See in Seoul This Weekend 27 September 2019, Frieze

A woman pulls an archer's bow at a dot painting. The arrow hits a white dot. She removes it before covering the dot with a square of white tissue paper. An action work by Soungui Kim, Ten thousand ugly ink dots (1982), is captured on video in the artist's first major retrospective in Seoul's National Museum of Modern and Contemporary Art (MMCA).

10 new artworks have recently been added by Arario Gallery.
Sign up now to be among the first to know when new artworks are added.