David Zwirner is pleased to announce an exhibition of work by Polish artist Andrzej Wróblewski (1927–1957) at the gallery's 24 Grafton Street location in London. This will be the first solo presentation of his work in the United Kingdom.

Now considered a leading figure in postwar Polish art, Wróblewski's short but prolific career encompassed painting, works on paper, and prints. Often drawing from Poland's sociopolitical atmosphere in the wake of the Second World War, Wróblewski's singular practice is characterised by a unique blend of figuration and abstraction. On view will be a group of key paintings and a wide-ranging selection of works on paper detailing recurring subjects throughout the artist's oeuvre.

Shortly after moving from his hometown of Vilnius to Kraków in 1945, Wróblewski concurrently enrolled in the painting and sculpture program at the Kraków Academy of Fine Arts and the art history program at Jagiellonian University. At this time, Kapism, or Polish Colorism, was the leading style at the Academy, emphasising colour over subject matter. Wróblewski made a few works in accordance with this mode, but soon found the style to be limiting. Never fully conforming to the Academic approach or to the pervasive style of communist-era Socialist Realism, Wróblewski developed an experimental formal language to address wartime trauma and its effect on the human condition.

In 1948, at the age of twenty-one, Wróblewski started his Chauffeur series, a body of work characterised by its sparse use of colour and the presence of an anonymous driver, his back turned to the viewer. Blue Chauffeur, 1948, the first painting in this series, is made up of three distinct fields of colour that order the composition: white, red, and blue–the latter of which was frequently used by Wróblewski to denote death. Throughout his career, Wróblewski completed many double-sided works, a method he deliberately applied to paintings and works on paper. Conceived as two parts of a larger whole, these works typically deal with opposing subjects that complicate and advance the meaning of the work on either side, a strategy that allowed Wróblewski to convey multiple narrative and stylistic possibilities. On the opposite side of this painting, Wróblewski executed Liquidation of the Ghetto, 1948, a contrasting image densely populated with figures in signature hues of blue. Both made in the same year that Wróblewski cofounded the Self-Educational Group, a student organization created in response to growing dissatisfaction with the Academy, these paintings mark a shift in his subject matter toward the individual and his psychic life.

Wróblewski began his seminal Execution series one year later. In a number of works from this series, Wróblewski has narrowed in on people lined up against a wall in the moments directly before or after their execution by the Nazis. In a related drawing entitled Sketch for Executions no. 1499, n.d., four plainly dressed figures stand shoulder to shoulder, their bodies delimited by the borders of the page. One figure is suspended in front of them upside down, his orientation in sharp contrast to the others in line. Wróblewski often created distinct visual markers such as this configuration to illustrate a subject's imminent fate and ultimate dehumanisation.

In a departure from this format, Mother with Dead Child, 1949–an additional painting from this series and among his best-known works–addresses the subject of execution in more intimate terms. In this work, an infant clutches his mother in a somber embrace. Wróblewski has used blue once again, this time to mark the difference between a person of this world and one who has recently departed from it.

The later part of Wróblewski's oeuvre is marked by an intense period of production on paper, an essential medium for the artist. Here he documented a number of subjects including cityscapes, geometric abstractions, and landscapes from his travels. But perhaps his most significant works on paper were his studies of the human figure, sensitively rendered in fields of empty space. When facial features are articulated, the subject's gaze is often averted, hinting at impatience or absence. As art historian Noit Banai has noted, 'In this extraordinarily precarious and plural historical moment, between the war's end and the advent of Socialist Realism as official cultural policy, Andrzej Wróblewski developed a language of radical corporality in which a subject's vulnerability to divergent relations of power was given tactile form.'1

Wróblewski's innovative approach to figuration–sometimes fusing human anatomy with geometric shapes, or foregrounding the figure in isolation–posited the body as a real and complicated subject, while also addressing the limits of its representation. The novel strategies he employed in the 1940s and 1950s would influence a younger generation of artists in Poland and abroad, including Luc Tuymans, who has commented on Wróblewski's and his own shared use of 'the empty space, the void.'2 In 2010, Tuymans included Wróblewski's work in The Reality of the Lowest Rank: A Vision of Central Europe, a group exhibition he curated at the concert hall and other venues in Bruges. Their work, along with that of René Daniëls, was also the subject of a three-person exhibition at Art Stations Foundation, Poznań (2014; travelled to Drawing Room, London), attesting to Wróblewski's continued relevance to contemporary art. 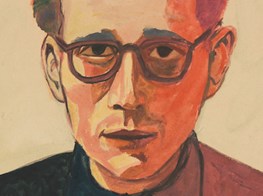 Who was Andrzej Wróblewski? The usual story goes like this. He was born in Vilnius (then Poland) in 1927; 14 when his father died during a Nazi house-call; 18 by the end of the war, when he moved to Kraków to study painting and sculpture at the Academy of Fine Arts. At 21 he began a number of extraordinary works that used enigmatic, deep-blue oils...

Sign up to be among the first to know when new exhibitions by Andrzej Wróblewski or at David Zwirner open.