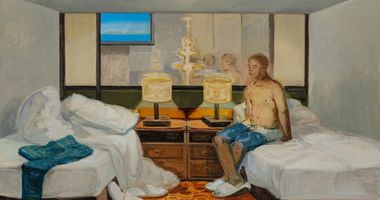 Chen Ching Yuan is a contemporary Taiwanese artist known for his oil paintings that combine a muted, realist style with surreal scenes.

Chen Ching Yuan studied at the Taipei National University of the Arts, where he earned both his BFA (2007) and MFA (2013).

Recurring objects in Chen's paintings include cards, blocks, and trees, which typically appear in interaction with human figures. Chen's sombre colour palette, with an abundance of browns, and mimetic figuration evokes historical paintings while featuring contemporary or surreal subjects.

In the paintings belonging to the 'Card Stunt' series, produced mainly between 2018 and 2020, figures appear holding large cards before their bodies. Some are in isolation, as in Card Stunt V (Yellow Blue and Red) or in rows, as in Card Stunt IX (Orange Yellow Blue and White) (both 2019), though their features remain indistinct in either case. The cards, obscuring most of the figures' bodies from view, also render it difficult to discern the time and space of these paintings.

Inspired by performances such as China's Beijing Olympics opening ceremony in 2008 or North Korea's Mass Games, an art form in which performers stage a synchronised choreography as a mass, 'Card Stunt' explores the designation of an individual human body as a unit in a structure or a system.

Chen's examination of the unit and the mass, to an extent, continues in 'The Blocks' and 'Tibmers' series. Painted with muted colours, 'The Blocks' revolve around small stacks of bricks or blocks used in construction in a consideration of their dual function as both modules of creation and demolition. Trees are the main protagonists of 'Timber', although they have already been sectioned off into large sections. Workers hold the fragmented branches and trunks in place, using their gloved hands or tools, with the result that the trees appear to defy gravity.

Both bodies of works were first exhibited in The Brick and Timber, Chen's online solo presentation at White Cube in 2021.

In PAGES (2021–20), his solo exhibition at Taipei's TKG+ in November 2021, Chen presented new works made during his 2020 residency at the Cité internationale des arts in Paris. Coinciding with the COVID-19 outbreak, the residency prompted the artist to spend almost six months in lockdown, during which he made sketches and paintings of ordinary activities—people waiting for the bus, dancing, or simply gathering—that had now become inaccessible.

Chen Ching Yuan has participated in both solo and group exhibitions.

Chen Ching-Yuan's surrealistic paintings unsettle definitions of the ordinary and perceptions of time.

Be among the first to know when new artworks and exhibitions by Chen Ching-Yuan are added to Ocula.
Sign Up Login