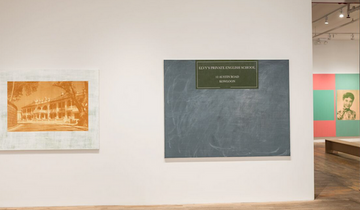 The painter David Diao was born in 1943 in Chengdu, Sichuan, China. After the Chinese Civil War he lived in Hong Kong from 1949 to 1955, and then settled permanently in the United States. He has lived and worked in New York City since 1964.

By the late 1960s Diao had established himself in the tradition of large-scale late modernist abstraction—he was included in the first Whitney Biennial in 1973—but his career hinges around the period in the late 1970s and early 1980s when, having actually stopped painting entirely, and spending a year in Paris, his painting made a fundamental conceptual shift. Rather than continuing to make abstract paintings, in 1984 Diao began to produce work that took the history of abstraction as its subject matter. He paid particular attention to the life and work of Barnett Newman and to Russian constructivist artists among others. Marked by sharp intelligence, humor, and a degree of cynicism, and often combining the look of hard-edge abstraction with the appearances of diagrams, plans, and charts, this established the intellectual and stylistic basis for the whole of his subsequent career. He increasingly combined flat areas of paint with screen printed text and images. Eventually, as his career lengthened and acquired its own history, increasing autobiographical elements entered his work. At first these related to the factual details of his painting career, but eventually they focused increasingly on Diao’s childhood in Chengdu and Hong Kong.

In 1985 Diao began showing at New York’s newly founded Postmasters Gallery. He has since had a dozen solo shows there. In the autumn of 2015 the Ullens Center for Contemporary Art, Beijing staged a retrospective of 115 works, his largest ever exhibition. He continues to live and work in the same building he has occupied since 1974.

Ocula Insight Artist Insight: David Diao By Robert Ayers In a career spanning more than half a century [David Diao][0] has conducted a many-faceted exploration of the assumptions and comprehension of contemporary painting, which has been underpinned by vast