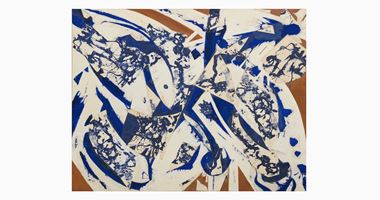 Lee Krasner was a pioneering figure of the Abstract Expressionist movement, but her artistic career was for many years largely over-shadowed by that of her husband Jackson Pollock's.

Today Krasner is considered to be a key transitional figure within abstraction, having posthumously been recognised as one of the major artists of American post-war art alongside Pollock, Mark Rothko, Willem de Kooning, and Franz Kline.

Born in Brooklyn to Russian-Jewish refugees, Krasner grew up immersed in the 1930s and 40s New York art scene. Graduating from Washington Irving High School in 1925, she went on to attend the Women's Art School of Cooper Union and National Academy of Design, where she received thorough training in drawing, painting, and design in 1932.

Beginning work for the Works Progress Administration's Federal Art Project in 1935, Krasner soon grew dissatisfied with her development as an artist. In 1937, she enrolled in classes with painter Hans Hofmann, who introduced her to the contemporary avantgarde, including Fauvism and Cubism, and taught her the importance of both colour and formal abstraction.

While as an active member of the Artists Union American Abstract Artists (AAA), Krasner met the likes of de Kooning, Arshile Gorky, Kline, and Rothko. Following their participation in the major group show French and American Painting at the McMillen Gallery in 1942, Lee Krasner began a relationship with Pollock.

Although characterised as an Abstract Expressionist due to the abstract and gestural nature of her work, Lee Krasner frequently experimented throughout her career, preventing her work from being defined by a singular, distinctive style. She regularly changed her approach to technique, subject matter, and materials, working across painting, collage, charcoal, and mosaics.

Krasner's critical nature often led her to cut apart and repurpose earlier drawings and paintings as collaged paintings, resulting in a relatively small surviving body of work. Her varying style sets her apart from other Abstract Expressionists, whose styles were often recognisable and unchanging. However, Krasner's gestural technique, approach to structure, and thematic preoccupation with the self, nature, and modern life would remain a constant in her work.

Profoundly affected by Pollock's work, the early years of their relationship saw Krasner's style evolve in an attempt to move away from the Cubist techniques she had learnt under the tutelage of Hans Hofmann and embrace a looser, expressionist style. This would prove to be a frustrating period for Krasner, during which she would paint and repaint the same canvas repeatedly, scraping off and reapplying paint until it resembled a grey slab.

Soon after their marriage in 1945, Krasner and Pollock moved from New York to Springs, East Hampton, where Krasner began 'Little Images' (1946–1950). Totalling around 40 works, including Shattered Colour (1947), Shellflower (1947), Untitled (1949), and Composition (1949), these loosely gridded, mosaic-like pieces are characterised by a thick and repetitive application of paint, sometimes dropped directly onto the canvas. Although influenced by Pollock's gestural style, 'Little Images' is recognised as Krasner's first successful attempt at producing original artwork rather than work based on an art historical model.

Following a period of collages, Krasner's 'Earth Green' (1956–1959) and 'Umber' (1959–1961) series defined her practice for the following two decades. Begun in the months preceding Pollock's death in 1956, 'Earth Green' is seen as a product of the emotional turmoil she experienced at the time, while in negotiation with a reassertion of her artistic independence.

Krasner's 'Umber' paintings were borne out of a period of insomnia she suffered in the wake of Pollock's death, which was followed by the death of her mother. The result was a series of abstract works primarily executed in umber, cream, and white, painted in the night under artificial light. Today, these works are understood by scholars as Krasner's 'most psychoanalytically evocative work'.

The rawness and intensity seen in 'Umber' continued into her work produced in the 1970s. They culminated in Eleven Ways to Use the Words to See, her solo exhibition at Pace Gallery in 1977, which featured large-scale, geometric works constructed from repurposed charcoal figure studies Krasner had worked on in the late 1930s.

For much of her career, Krasner's creative standing was overshadowed by her late husband's. In an ARTnews review of the 1949 exhibition Artists: Man and Wife, in which both Krasner and Pollock participated, Gretchen T. Munson wrote, 'There is ... a tendency among some of these wives to "tidy up" their husbands' styles. Lee Krasner (Mrs. Jackson Pollock) takes her husband's paints and enamels and changes his unrestrained, sweeping lines into prim little squares and triangles.'

It was only much later that Krasner's work received wider attention with her first solo exhibitions at London's Whitechapel Gallery (1965) and the Whitney Museum of American Art in New York (1975). A retrospective of her work in 1984 at the Museum of Modern Art (MoMA) recognised her as one of the pioneering Abstract Expressionists of the latter half of the 20th century.

Picasso, Mondrian, Krasner, and Kelly's works are some our favourites that went up for auction at Christie's 20th Century Evening Sale on 13 May. ⁠⁠

Read More Related Press At MoMA, Women at Play in the Fields of Abstraction 13 April 2017, The New York Times

Abstraction is a foundational subject for MoMA. The institution was basically conceived on the premise that this is the mode to which all advanced art aspires. But the work in Making Space, dating f

Sign up to be notified when new artworks and exhibitions by Lee Krasner are added to Ocula.
Sign Up Login