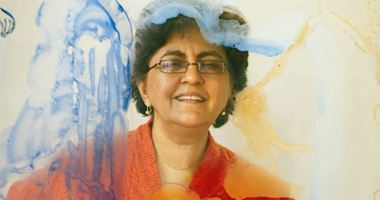 Nalini Malani is widely considered to be the pioneer of video art. Her 50-year multimedia practice has combined painting, theatre, video, and illustration to create immersive and politically charged installations that explore violence, racial tension, and feminism.

Malani was awarded the Joan Miró Prize in 2019 and received the first National Gallery Contemporary Fellowship in 2020.

Malani was born in Karachi, British India, now known as Pakistan. Her family was forced to relocate during the Indian partition, initially moving to Kolkata before settling in Mumbai in 1958.

The artist studied at the Sir Jamshedjee Jeejeebhoy School of Art in Mumbai between 1964 and 1969 and received a Diploma in Fine Arts.

During her studies, she held a studio at the multidisciplinary arts centre Bhulabhai Memorial Institute in Bombay, a space where artists, theatre actors, and musicians worked individually and collaboratively, enabling Malani to develop her practice among a varied range of cultural practitioners.

Following her graduation, Malani worked extensively with photography and film. She was the youngest participant of the Vision Exchange Workshop, a programme organised to promote interdisciplinary experimentation, allowing her to explore working with photograms and different kinds of films. Her early videos, Still Life and Onamism (both 1969) addressed the restrictiveness of tradition in female sexuality. Envisioned as a self-portrait, Malani focuses on her own items of clothing and books as they are thrown on a bed.

Malani was awarded a scholarship from the French government to study in Paris between 1970 and 1972. This period, which followed the May 1968 student protests and worker strikes in Paris, solidified Malani's political convictions as she worked with illegal migrants, distributed leftist newspapers, and attended lectures by political thinkers such as Noam Chomsky and Simone de Beauvoir. After her studies, Malani returned to India as a means 'to become part of the ongoing process of nation building'.

Nalini Malani's politically charged works are inspired by the experiences of those on the margins, drawing from her own life and those around her.__

The artist has previously referred to the Indian partition as 'a shadow over [her] life.' Malani's work often integrates current news and reportage with Greek and Hindu mythology, creating massive installations and video works that she refers to as 'video plays' for their relationship to theatre. Her personal political affiliations as a feminist, social activist, and environmentalist bleed through her work and extend past the confines of the white cube.

In Mother India: Transactions in the Construction of Pain (2005), Malani touches upon shared experiences faced by women in India. This five-channel video play combines archival footage with Malani's painted frames, exposing the cyclical nature of violence against women while referencing both the Indian Partition and the 2002 Gujarat riots, which resulted in assaults against Muslim women.

Malani's installations began with her 'Wall Drawing/Erasure Performances' (1992—ongoing) series. Originally created as a means to subvert art as a commodity, these works involved Malani etching charcoal drawings on the gallery's walls, creating an immersive experience that she would eventually erase. The piece City of Desires (1992) responded to the rise of Hindu right-wing nationalism. In this work, Malani would erase and re-draw several elements, creating ghostly images littered across the walls of Mumbai's Chemould Gallery.

Malani has also played with light and shadow in her work In Search of Vanished Blood (2012) by projecting videos through hand-painted motorised Mylar cylinders suspended from the ceiling. This work, originally featured in Documenta 13, is a multi-layered installation that integrates cultural and historical iconography with various literary texts, and explored the complexities of intermingling traditions.

The artist's first U.K. commission, Can You Hear Me? (2020), involves 88 projected animations created between 2017 and 2020. Malani's illustrations include everyday notes, quotes, and hand-drawn images. These animations flicker at high speed, depicting quick horrific stories and frames of violence as a means to discuss national trauma and global social issues. Can You Hear Me? takes cues from writers such as Hannah Arendt, Bertolt Brecht, and Milan Kundera, among others.

The first encounter I want is that of beauty and I use that device to draw in the spectator. Then I unfold a story, which will have its ups, downs, and contradictions.

View All (7)
Related Press 'The Rebellion of the Dead': a retrospective of Indian artist Nalini Malani at Centre Pompidou, Paris 18 December 2017, Art Radar

Supported by Kiran Nadar Museum of Art (KNMA), the exhibition The Rebellion of the Dead, Retrospective 1969-2018 is part of a unique collaboration between Paris' Centre Pompidou, where it is on show

The compact, two-room presentation intelligently focuses on Malani’s singular video-art practice. It is a simultaneous elaboration on, and simplification of, the medium that the artist began working with in the early 2000s, having largely abandoned painting in oil on canvas during India’s tumultuous 1990s in favour of a medium she felt...

Artist Nalini Malani's exhortations to address violence are particularly poignant after this month's tragedies. When we speak by phone, shortly before today's opening of her exhibition at the ICA Boston, she emphasizes the artist's responsibility to consistently evoke discourse about conflict. In her installation, In Search of...

Be among the first to know when new artworks and exhibitions by Nalini Malani are added to Ocula.
Sign Up Login