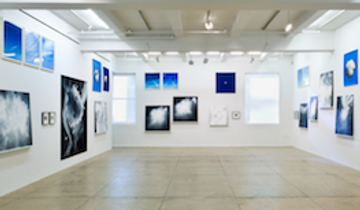 Tacita Dean is a British contemporary artist known for her mesmerising 16mm and 35mm films that experiment with narrative and the medium of analogue film. Also working with drawing, photography, and installation, Dean addresses the culture of obsolescence.

Tacita Dean's 16mm films from the 1990s are experimental, showing a breadth of narrative, atmosphere, and subject. For example, a classroom teacher in post-communist Prague explores the meanings of presence, absence, and loss in front of his pupils in Ztráta (Loss) (1991–2002); while A Bag of Air (1995) opens with a poetic sequence of a hot air balloon rising into the sky, before the camera focuses on theartist attempting to catch air in a plastic bag.

In the 2000s, lamenting the demise of her favoured 16mm film due to the rise of its digital counterpart, Dean produced several films commemorating the medium's history. Works such as Kodak and Noir et Blanc (both 2006) were shot in Chalon-sur-Saône, France, where the film production facility of a Kodak factory was about to be closed. Upon receiving the Hugo Boss Prize in 2006, Dean exhibited the two films at the Solomon R. Guggenheim Museum alongside Found Obsolescence (2006), a strip of unexposed 16mm negative found at the factory.

The artist further engaged celluloid film as an actively contemporary art medium in FILM, Dean's large-scale video installation at the Turbine Hall in Tate Modern, London in 2011. Though projected at a monumental scale, the hand-tinted and edited footage in FILM were nevertheless intimate in their vibrant colours and playful imagery. Such intimacy is characteristic of Dean's film artworks, which Ocula Magazine described as resembling 'living still-lifes' in 2016.

The Sea and Blackboard Drawings

Since the 1990s, Tacita Dean has examined the relationship between humankind and the sea across film, photography, and drawing. The 16mm colour films Disappearance at Sea (1996) and Disappearance at Sea II (1997) are devoted to the story of Donald Crowhurst, a mid-20th-century British businessman and amateur sailor who died at sea and left behind a fabricated record of his journey.

Dean also captures epic scenes of nature in her blackboard drawings. 'Roaring Forties: Seven Boards in Seven Days' (1997), for example, saw the artist create an epic sea narrative based on the turbulent waters of the South Atlantic in white chalk on 8-foot-square Masonite panels. While resembling her black-and-white films in aesthetic, the blackboard works also appear incomplete. Dean's addition of handwritten text, which evoke storyboard notations, allude to the editing process in film as well as the ever-changing nature of narrative.

As with Disappearance at Sea, an historical anecdote is central to the nine-panel The Montafon Letter (2017), depicting a snowy mountain. Dean was inspired by a series of avalanches in 17th-century Austria, which first buried 300 people, then buried the priest sent to officiate the burial site, then finally unburied the priest, who was still alive. The artist has said that the work makes a reference to Brexit and the 'hope that the last avalanche will uncover us.'

While living in Berlin in the early 2000s, Tacita Dean drew inspiration from flea markets to create narratives out of seemingly random, disparate objects. The artist's book Floh (2001) features found photographs juxtaposed together to form a story of intimacy and leisure, while another book, Die Regimentstochter (2005), brings together programmes of vintage opera and theatre performances found in flea markets.

In 2020, Tacita Dean was commissioned by The Royal Opera House in London to design backdrops for The Royal Ballet's performance of Dante's Divine Comedy. Through drawing, photography, and film, the artist visualised the three realms—Inferno, Purgatory, and Paradise—from Dante's journey.

New work revolving around The Dante Project is scheduled to be presented at Dean's solo exhibition at Marian Goodman Gallery, New York, in September 2021.

Dean has sharply weaved and intertwined a variety of her inspirations and ideas into a new body of work with multiple layers of connection.

View All (7)
Related Press Tacita Dean Landscape review – a total eclipse of the senses 14 May 2018, The Guardian

Clouds and stones and clods of light. Mountains in Austria and an ant on a rock in Mexico. Best of all, a long, slow eclipse. The final exhibition in Tacita Dean’s three-part meditation on the portrai

Film–proper, old-fashioned analogue film, screened using one of those hulking projectors that generate nearly as much heat and sound as light–is Tacita Dean’s medium and, in many ways, her subject. He

Now, the full scope and richness of Dean’s work is to be revealed in three exhibitions, which mark a unique collaboration between three London museums. In its first exhibition devoted to the moving im

It is tempting to think of Tacita Dean as a witchy presence in the world, a diviner of hidden forces. Her chosen medium is an antique one: spooled film. Waiting is a big part of her method, and watchi