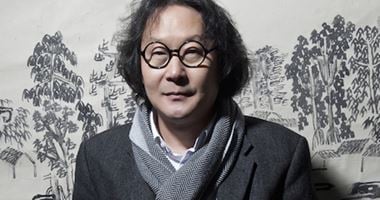 Xu Bing was born in Chongqing, China in 1955. In 1977 he entered the printmaking department of the Central Academy of Fine Arts, Beijing (CAFA) where completed his Bachelor’s degree in 1981, staying on as an instructor and earning his MFA in 1987. In 1990, on the invitation of the University of Wisconsin-Madison, he moved to the United States. Xu currently serves as the Vice President of CAFA.

Solo exhibitions of his work have been held at the Arthur M. Sackler Gallery, Smithsonian Institution, Washington DC; the New Museum of Contemporary Art, New York and the Joan Miro Foundation, Spain, amongst other major institutions. Additionally, Xu Bing has shown at the 45th and 51st Venice Biennales; the Biennale of Sydney and the Johannesburg Biennale amongst other international exhibitions.

Over the years, Xu Bing’s work has appeared in high-school and college text-books around the world including Abram’s Art Past – Art Present, Gardner’s, Art Through the Ages and Greg Clunas’s Chinese Art a volume in the Oxford History of Art series. In 2006, the Princeton University Press published Persistence/Transformation: Text as Image in the Art of Xu Bing a multidisciplinary study of Xu Bing’s landmark work Book from the Sky. In 2007, Professor Robert Harrist, Chair of Art History at Columbia University, New York, taught a graduate seminar entitled The Art of Xu Bing.

In 1999, Xu Bing was the recipient of a MacArthur Fellowship in recognition of his “capacity to contribute importantly to society, particularly in printmaking and calligraphy.” In 2003 Xu Bing was awarded the Fukuoka Asian Culture Prize, and in 2004 he won the first Wales International Visual Art Prize, Artes Mundi. The Southern Graphics Council awarded Xu Bing their lifetime achievement award in recognition of the fact that his, “use of text, language and books has impacted the dialogue of the print and art worlds in significant ways.”

On 15 November 2016 the Chinese Contemporary Art Award (CCAA) announced winners Cao Fei, He Xiangyu and Xu Bing. In its 10th edition, the award was founded in 1997 by pioneering Swiss collector Uli Sigg, who began collecting Chinese contemporary artists in the 1990s. The aim of CCAA is to give awards to Chinese artists and art critics who show...

On September 3, 2016, sixteen contemporary Chinese artists will display several of their works at MoCA Shanghai as part of the museum’s new exhibition, Shanshui Within. The works will provide viewers with the artists’ unique interpretations of traditional Chinese culture and how it evolved as a result of the rapid development of...

In February 2016, coinciding with the Chinese Lunar New Year celebrations, Manchester’s Centre For Chinese Contemporary Art (CFCCA) launched a six-month programme of exhibitions for its 30th anniversary. The anniversary programme invites artists from CFCCA’s history, who have become internationally acclaimed, to return to Manchester to...

Do Westerners take Chinese artists seriously as artists? Or are they merely illustrations of a changing China? Uli Sigg, a Swiss businessman and former ambassador to Beijing, began buying Chinese contemporary art in the 1970s, when artists, often working alone and in secret, were reacting to the political turmoil of the time. His collection of over...

Sign up to be notified when new artworks and exhibitions by Xu Bing are added to Ocula.
Sign Up Login