The Aichi Triennale has announced the theme of its fifth edition, which will take place in the Japanese prefecture from 30 July to 10 October 2022. With casualties from the pandemic continuing to mount, the event will explore what it means to be 'STILL ALIVE'.

'In the post-COVID-19 era, the question of how we might recover a sense of daily life and socio-economic activity in order to build a sustainable and more equitable world is an urgent one that the entire world will face,' wrote Artistic Director Mami Kataoka.

The exhibition takes its name from On Kawara's series 'I Am Still Alive', which has its origins in three telegrams the Aichi-born artist sent to curator Michel Claura in December 1969. They read: 'I AM NOT GOING TO COMMIT SUICIDE DON'T WORRY', 'I AM NOT GOING TO COMMIT SUICIDE WORRY', and 'I AM GOING TO SLEEP FORGET IT'. A month later, On sent the first of nearly 900 'I AM STILL ALIVE' telegrams that went out to dozens of recipients over the next three decades.

The Triennale will travel back and forward in time to explore three sub-themes: how to revive the diversity of stories of the past in the present era; how to survive in this day and age; and how to ensure the survival of the Earth and human beings one million years in the future.

Following in On's footsteps, the Triennale will seek to emphasise conceptual art and the use of texts and symbols, while also accommodating art forms that are sometimes excluded from contemporary art, such as ceramics, textiles, and performance.

The exhibition follows on from a bold but controversial fourth edition that explored censorship and was shut down by local authorities for showing Kim Seo-kyung and Kim Eun-sung's Statue of Peace (2011), a life-size sculpture of a so-called 'comfort woman'.

Also in the previous triennale, artist Gu Yu asserted his existence in a way reminiscent of On Kawara. For GU YU LU (2017), pictured top, he erected street signs bearing his own name. The streets were subsequently included in official maps by unwitting officials. —[O] 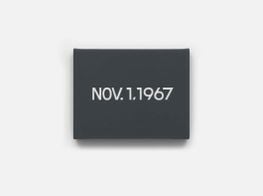 Japanese-born artist On Kawara is best known through his association with the beginnings of American Conceptual art. Born in 1932, Kawara was 12 years old when the atomic bombs fell on Japan. In his youth, he travelled widely before setting roots in

The event made headlines in 2019 when a work about censorship was itself removed from the exhibition.