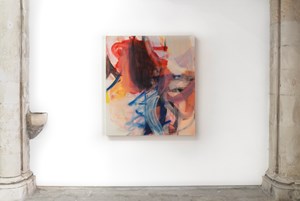 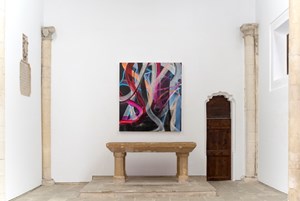 Kewenig is pleased to present the first exhibition of works by Liliane Tomasko (born 1967 in Zurich). For Amygdala, Tomasko has created new paintings in acrylic and acrylic spray on canvas, as well as a series of oil works on paper, to be presented in the Oratorio de Sant Feliu and the adjoining exhibition space of the gallery.

For many years now, Tomasko's oeuvre has been affected by an intensive investigation of dreams, the unconscious and the emotions. Since the end of the 1990s, she created figurative, often melancholic paintings which explored dark spaces or curtained windows with blurriness and an almost baroque handling of light like subtle interiors of the inner. She consistently explored the morning-abandoned bed with its furrows and imprints of nocturnal life. Whereas those works approached their subject by means of the immediate surroundings and the metaphors of the bed and of absence, in recent years the painting of Liliane Tomasko has not only become abstract; the artist has also penetrated to the core and the origin of her pictorial production.

'Deep inside our skulls lies an almond-shape set of neurons that plays a crucial part in the processing of emotions and in our memory. It's called the amygdala and forms part of the limbic system. Having long been absorbed by a profound interest in all things that are not readily understood, such as ideas surrounding the subconscious, sleep and dreaming, I was fascinated to learn that this small part of our brain lies nestled in darkness, protected from light and outside impact. Our emotional life therefore is processed deep inside ourselves. So are dreams; they are generated whilst we sleep, and in the absence of light. Both contribute greatly to our existence, our presence in the world as human beings, but are equally difficult to understand and make sense of. The paintings and drawings in this show reference the part of ourselves which is not accessible through reason, but follows another logic. One that finds inspiration in the dark corners of ourselves, where the rational cannot reach because the weave is so dense.'

Even today, the wrinkles in an unmade bed are Tomasko's point of departure and catalyst for her abstract painting. Always at the beginning of the process is the photograph of a bed which, with its tangled and crumpled sheets, determines the physical skeleton of the future picture. Tomasko continues with sketches and a drawing on canvas before she gives wide-ranging space to a free painterly process with acrylic paint and acrylic spray.

The exhibition presents three large-format, dark paintings with dense and dynamically interwoven lines and looping forms. The insistent movements of a dream of: PRODUCING IMAGES (2019) or Upheaver (2019) are reminiscent of endless, abstract morphologies and rapidly growing, proliferating nature. The brushstrokes and sprayed lines extend past the edge of the canvas, so that the visible picture seems to be a window offering a view into the structure of the interior—like a portrait of the brain which, with a vigorous impetus, generates dreams and creates images.

Alongside these paintings, Tomasko juxtaposes bright and luminous paintings such as fabric of dreams (2019) or A darker shade of heart (2019) which, in their mixture of clarity and indeterminacy, seem like topographies of dream and materialszed emotions. Here she gives rise to more subtle painterly surfaces, overpaints existing structures, smears, and lets the paint run. Small format, black-and-white paintings, are more cooler and graphic: like clairvoyant magnifying glasses which capture the physicality and crisp clarity of dreams with consummate mastery.

'If our home is the interior to which we return every day for respite from the outside world, sleeping and the dream realm are where we go to even deeper levels of ourselves. It is a kind of journey to our most intimate space, a descent into the storehouse of our memories, our hopes, fears and desires, and the accumulation of our ideas and beliefs. There was a practice in ancient Greece called incubation, whereby people who needed guidance or physical healing would spend an extended period of time in a dark cave, or a light-deprived chamber inside a temple. There they would lie for long periods of time, with no outside stimulus hitting their retinas to make images and produce the colours which shape the world as we see it during our waking hours. Hippocrates (469-399 BC) had a simple dream theory: during the day, the soul receives images; during the night, it produces images. In dreams, elements of reality come together to make constellations that would otherwise be unimaginable. We create new connections between things, space and time. There is a sense of experimental freedom, dominated by the surreal and paradoxical. This sense of impossible simultaneities finds its way onto my canvases, through a process of transformations that starts with a photograph of an unmade bed and ends up as an abstract painting.'

Tomasko's works derive their vitality from the tension between the figurative initiation and the painterly result of the various phases of her inner investigation of the nocturnal life that remains so hidden from us. We experience this vitality through the many layers and textures of her creative process. Just as the amygdala processes emotions and dreams, so Tomasko brings to light internal structures and matrixes and ushers them into a vigorous and vital mode of painting: into the present and out into the external. Having arrived at the origin of her pictorial production, her work no longer inhabits melancholy as in the earlier paintings, even while they preserve mystery and darkness.

Liliane Tomasko lives and works in Tappan, New York and in Königsdorf near Munich. She studied at the Camberwell School of Art, at Chelsea College of Art and Design and finally at the Royal Academy of Arts in London. Her oeuvre has been exhibited throughout the world at institutions and museums: for example, at the Museo MATE, Lima (2018/2019); at the Rockland Center for the Arts, New York State (2018); at the Kunstwerk. Sammlung Klein, Eberdingen (2017); at the Fundación Bancaja, Valencia (2016); at the Lowe Art Museum, Miami; at the Phoenix Art Museum, Phoenix; at the Kunsthalle Rostock (2015); at the IVAM, Valencia with a subsequent station at the Casall Solleric in Palma de Mallorca (2011). The Kunsthalle Krems featured her in 2017 in the fundamental survey Abstract Painting Now together with Gerhard Richter, Katharina Grosse, Charline von Heyel, Christopher Wool et al. In the autumn of 2019, the Château La Coste in France devotes a solo exhibition to her oeuvre. The South London Gallery will present her works in a solo exhibition in 2020.

Sign up to be among the first to know when new exhibitions by Liliane Tomasko or at KEWENIG open.