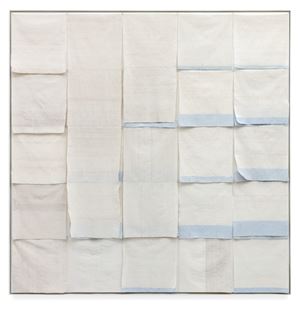 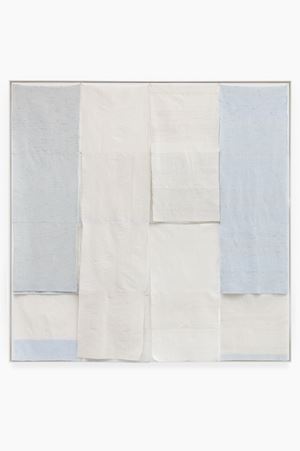 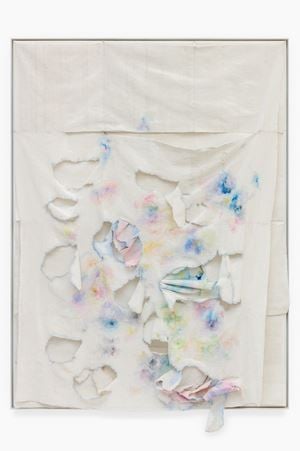 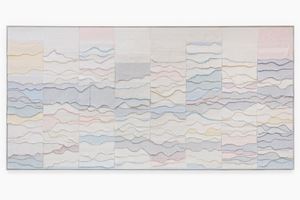 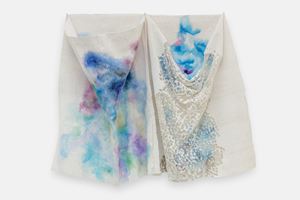 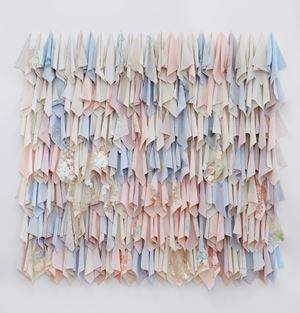 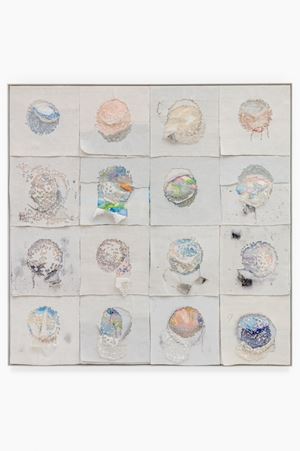 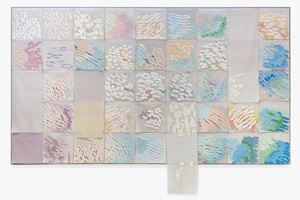 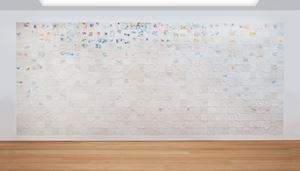 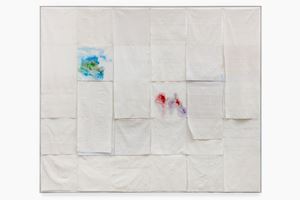 Lehmann Maupin is pleased to announce The River and the Raft, Los Angeles-based artist Liza Lou's first exhibition in Seoul. Over her 30 years of working primarily with glass beads, Lou has pushed the boundaries of her chosen medium, exposing its potential as not only a material, but as a conceptual object. Spanning two locations, Lou presents the culmination of a new era in her practice, creating a series that can be classified as both painting and sculpture: a formal non-binary true to the nature of her materials and philosophical line of inquiry about the nature of an artistic practice. There will be an opening reception for the artist on September 26, 2019 from 5pm- 7pm at 74-18, Yulgok-ro 3-gil, Jongno-gu, Seoul and at the Songwon Art Center, 75, Yunboseon-gil, Jongno-gu, Seoul.

Within the Buddhist canon, the Parable of the Raft tells of a man who comes to a river he needs to cross. Having neither a boat nor a bridge, he builds a raft, spending a great deal of time and effort lashing together branches and ropes in the correct configuration, testing his design until it is able to safely transport him across the river. Once he reaches the opposite bank, he is dismayed over what to do with his creation, which was instrumental in his safe passage and the ultimate success of his journey. The question becomes, should he continue to carry it with him, even though it would be debilitating and slow his progress? This is a lesson in letting go, about valuing the investment and time we committed to past pursuits, while accepting their loss so we are able to move forward unencumbered.

For decades, Lou has confronted the inherent challenges of working with beads, transforming the limitations of this nontraditional fine art material into an investigation of the potential of a single form. Now in the collection of the Whitney Museum of American Art, her watershed work Kitchen (1991—1996)—in which an entire American kitchen was overlaid with glass beads—was produced in solitary practice over the span of five years. In the studio Lou established in KwaZulu-Natal in South Africa, where she has collaborated with Zulu artisans since 2005, Lou has developed a rigorous practice that prioritises process, beauty, and the chance outcomes of inviting others into her artistic process, adding, literally, an imprint to the work, through the transference of oils from their hands that tint the beads or the variance in their weaving. Working with this team, Lou constructed the monumental piece The Waves (2016), comprised of 1,000 white, cloth-like beaded sheets, a work of art inseparable from its process and its makers. This work lead to years of investigating the potential of a minimalist approach, and ultimately a return to basic visual elements—colour, light, line, volume, and texture—recasting beads as paint, mixed and bound to a canvas.

Most recently, Lou has further pushed her process and medium. Building on The Waves (2016) as the impetus for her work presented in The River and the Raft, she continues her unorthodox mode of production, painting upon, layering, smashing, and mending the beads in dense, multi-layered configurations. Lou's experimentation with positive and negative, flat and three-dimensional space, is most visible in works such as Psalm 51 (2019), which utilises beads carefully excised in a lacy pattern and leaves portal-like holes in each cloth through which colourful oil paintings are exposed. Other works, such as Comfort Animal (2019), take this dismantling of the beaded cloths to new territory, excising flaps of the material, left to hang free, recreating the flecks and daubs of paint that spread, bruise like and exposed, beneath their torn cover. This abstract approach is evident in all of Lou's work within this series that feature heavy impasto oil paint. The raw colour of unmixed pigment in works like Sunday Morning (2019) are presented grouped together in gradient hues, giving the oil paint a sculptural quality, more forged than painted, that is reminiscent of the labor and astute attention that goes into the weaving of each beaded surface. Other works feature more subtle hues of colour, derived from the thread that binds the beads together, and appear almost bandage-like. Unrolled and patched together on the wall, these feel like a salve or pause between the contained yet frenetic energy of the other works, calm and as aesthetically nourishing as fresh laundry hanging on a line.

In each work we see hints of Lou's previous series—a culmination of each aspect of those that have come before, the raft necessary to get her to this liberated place in her practice. With a deftness that can only come from decades of careful observation and attention to her material, Lou has exposed one of the ultimate principles of artistic practice— that within boundaries, freedom can be found. In choosing to focus on a single material, the artist has recalibrated the confines of the hierarchical nature of mediums of art—painting and sculpture—pushing a material not traditionally classified as either across the spectrum to both ends. It is, as Lou describes, 'minimalism with heart,' a careful study of the forms and conceptual function of the minimalist palette but with the associated dogma—particularly the erasure of its maker—left behind on the riverbank.

Following this exhibition, on November 22 the Whitney Museum of American Art in New York will open Lou's monumental Kitchen installation as part of the long-term collection exhibition, Making Knowing: Craft in Art, 1950—2019, on view through 2021.

The River and the Raft

Sign up to be among the first to know when new exhibitions by Liza Lou or at Lehmann Maupin open.