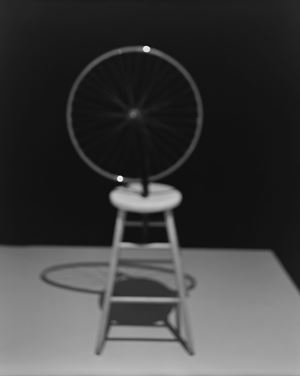 Marian Goodman Gallery New York is very pleased to announce our fourth exhibition and our first in the New York space of new work by Hiroshi Sugimoto which will open on Tuesday, September 10th, and will be on view through Saturday, October 26th. Titled Past Presence the exhibition will premiere an entirely new series of pictures which explore modern masterworks.

Sugimoto's masterful photographs exemplify both the craftsman's will to visual beauty and perfection, and an incisive exploration of philosophical notions of space and time, imagination and reality, science and history. Drawing on the classical photographic tradition, Sugimoto creates distilled, meditative images which unite the concrete and abstract, and contain meaningful conceptual underpinnings which seek to materialise the 'invisible realm of the mind' and the unconscious. In his process, Sugimoto seeks to comprehend the nature of perception, exploring duration and temporality through photography, and an understanding of how radical shifts through the past enlighten the present.

Since the mid-seventies, Sugimoto's work has drawn on both Minimalism and Conceptual art and his numerous bodies of photographic work have covered a diverse range of subjects, from Dioramas, Theatres, Seascapes, Portraits, and Architecture. Sugimoto's artistic activity has also reached beyond photography to encompass sculpture, architecture, writing, and performing arts.

Past Presence explores the artist's continued interest in time and history though a canon of twentieth-century masterworks which comprise this new series, shown here for the first time. From Brancusi, Picasso and Matisse, through Magritte, Duchamp, Mondrian, to Giacometti, Warhol and Johns, each picture depicts an object that appears to float in an idealised, opaque space, representing an archetypal form once nascent in the artist's mind. As in his earlier 'Architecture' series, Sugimoto's images appear out of focus and slightly indistinct, historically familiar, yet challenging the viewer through the blurred renderings to call upon our visual memory, to identify and ascertain each object and what it signifies within our modernity. Evoking questions of how images are remembered, Sugimoto asks us to conjure the original conception and essence of an artwork, removed from its associations. Are images recalled in precise recollection or as some intangible essence through time?

If a succession of images can provoke a revolution, Sugimoto's aesthetic strategy in Past Presence allows the return to a core conception of a subject, to the artist's original imaginings. Blurring the focal point channels the viewer to arrive at the purity, intent and innovation wrought by each representation, to contemplate the way we perceive and receive history.

In thinking about antecedents to Past Presence, Sugimoto cites the 'Architecture' series, recalling, 'I was photographing the masterpieces of Modernism using a large-format camera for my 'Architecture' series. The deliberate blurring of the image was an attempt on my part to recreate the initial inspiration as it first emerged in the mind of the architect...the original ideal form lies dormant within every great building...At the early stages of design, that ideal form appears inchoate and indistinct in the architect's mind. That is why I felt it should appear blurred and out of focus.' –H. Sugimoto, July 2019

As Jean de Loisy/Alfred Pacquement writes, in an introduction to the Versailles catalogue, Revolutions, 2018, 'In an interview Sugimoto quipped that the two artists he considers most significant for his imaginary world are Marcel Duchamp, the inventory of the readymade, and the sixteenth- century tea master (Sen No Rikyu), who did much to develop a ceremony deeply rooted in Japan's cultural traditions.'

A precursor to Past Presence might also be Sugimoto's 'Mathematical Models', first shown at the Brancusi Studio, 2006. Regarding the Models, Sugimoto wrote in 2013: 'Brancusi photographed his own sculptures using techniques May Ray taught him. Not unlike Brancusi's Endless Column, the very ends of my mathematical models intersect in infinity. In my mind's eye I can see two fine lines extend from either side of the 1-mm tip and meet at an infinite vanishing point. Brancusi's Endless Column manifests but a sampled portion of the infinite–which is a model of the artist's imagination.' (From A Surface of the Third Order, by Hiroshi Sugimoto, Leuum Museum catalogue, 2013)

Past Presence began initially through an invitation from The Museum of Modern Art, New York, when Sugimoto was invited in 2013 to participate in a photographic commission for the forthcoming anniversary of The Aldrich Sculpture Garden. While photographing outdoors, he encountered a Giacometti sculpture, which became the inspiration for this new body of work. From there he decided to move out of the garden, turning the lens of the camera indoors, photographing a selection of works in the museum's interior galleries. Thus commenced the series Past Presence, which now includes images taken predominantly at MoMA, New York, the Solomon R. Guggenheim Museum, and the Beyeler Foundation, Basel.

Hiroshi Sugimoto's upcoming projects will include two theatre projects which will highlight the artist's artistic direction. The first, will include direction and scenography for At the Hawk's Well (After William Butler Yeats), a production conceived by Sugimoto after Yeat's play and created for the Opera National de Paris, Palais Garnier, from September 19–October 15, 2019. The second, Sugimoto Bunraku Sonezaki Shinju/ The Love Suicides at Sonezaki, a tragic play that was banned after its 1703 premiere for more than two centuries, will be performed during the run of the White Light Festival, at Jazz at Lincoln Center's Frederick P. Rose Hall, New York from October 19-22, 2019. His exhibition POST VITAM will open at the Kyoto City Kyocera Museum on March 19 and will be on view through June 14, 2020.

Please join us at the opening reception for the exhibition Past Presence on Tuesday, September 10th, from 6-8 pm.

Sign up to be among the first to know when new exhibitions by Hiroshi Sugimoto or at Marian Goodman Gallery open.
Sign UpLogin