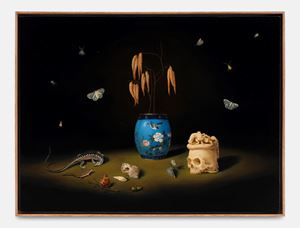 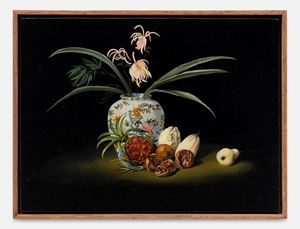 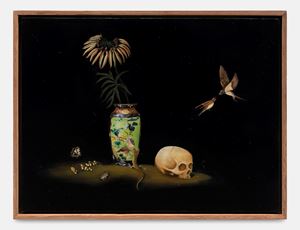 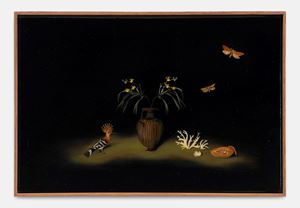 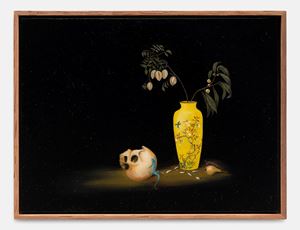 Sanam KhatibiPlease forgive me if I have been too blunt, 2020Oil on panel
16 x 21 cm rodolphe janssen Contact Gallery 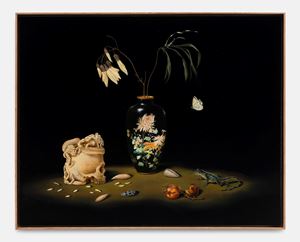 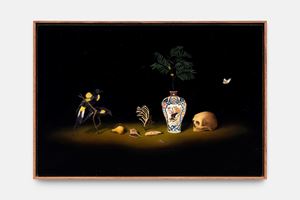 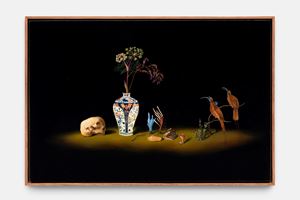 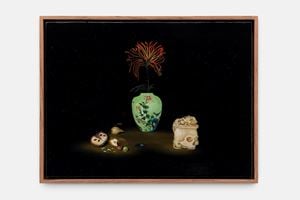 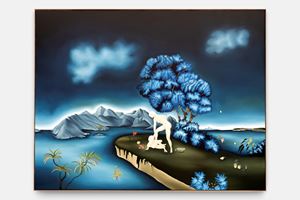 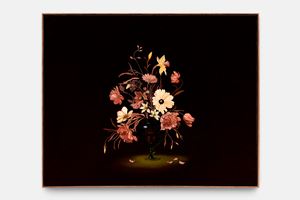 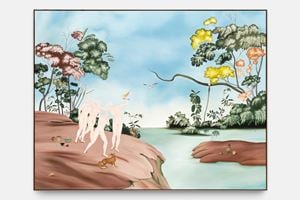 Sanam KhatibiVenom from the Ruby of their Lips, 2020Oil on canvas
170 x 220 cm rodolphe janssen Contact Gallery
View More Works By This Artist

The vanitas, writes Art Historian Norman Bryson, is built on a paradox of 'world rejection and world ensnarement.' A favourite subject of 'Golden Age' still lives, the vanitas became a reflection on the certainty of death, but also on the emptiness of accumulation. Like the certainty that a cut flower will wilt or food will rot, the vanitas meditates on the futility of pursuing that which does not last. Porcelain vessels and trinkets, emptied of function in a still life context, become merely ornamental—meditative and de- void of touch. They exist in a tiny void space, spotlit to indication only the vaguest sense of spatial depth.

15 vanitas still lives are exhibited in Cyanide, Sanam Khatibi's third solo exhibition at rodolphe janssen. In these minutely rendered miniature paintings, typical trappings of the Golden Age vanitas appear and reappear: a vase with cut flowers, insects, a collection of shells, an ornately carved human skull. Like that of the Baroque painter, these are bibelots from Khatibi's studio, fragments in a lifelong ontological pursuit of collection...

'Megalography,' writes Norman Bryson in his book of essays Looking at the Overlooked, 'is the depiction of those things in the world which are great—the legends of the gods, the battles of heroes, the crises of history.' These are scenes that contain no room for the merely trivial and ornamental, the rhopographic. And yet, as one's gaze shifts from the focused spaces of Khatibi's still lives to her two large-scale, megalographic paintings in the exhibition, these same vanitas objects incongruously reappear. Transposed into a beautiful and murderous new place, the objects are accompanied by a familiar mortal coterie: insects, birds, reptiles, and cultivated flowers. Are they home at last, liberated from the void space of a still life? Or anxious performers in unsettling nature, like city slickers roving the countryside in straw hats?

The human figures in Khatibi's dramatic scenes, invented or amalgamated from ancient imagination, appear undefined amidst their lush natural surroundings. They are primordial, as-yet-unfinished in their facture and their mythology. In one painting, three marauding women alike in appearance (perhaps sisters), chase a fourth woman who is stopped in her tracks by a hissing fox, her saviour or assassin. In another painting, two women, again alike in appearance (perhaps lovers) struggle in mortal combat: one screeches from all fours as her foe bares her teeth in anticipation of the final blow.

Life is frankly terrifying. Profuse facades betray cruel impulses. Khatibi's paintings remind us that these impulses are not anomalous, but omnipresent facts of nature lurking behind every tree. And here, as decorative objects once held in safe suspension find themselves transposed into violent scenes, we are left to ask: are they macguffins, weapons, or witnesses? Removed from the ornamental realm, perhaps they begin to suggest function again: a bowl becomes a basin for blood; a vial, the keeper of poison. Or perhaps they are simply in the way as reminders of another pernicious human trait: accumulation. Either way, these precious objects are imbued with hapticality as they are put in relation to their insatiable human counterparts. Suddenly weighted in space, they create—by their very presence in these forebodingly beautiful landscapes—a role for themselves in the human dramas they observe

Sign up to be among the first to know when new exhibitions by Sanam Khatibi or at rodolphe janssen open.