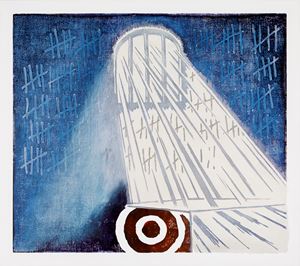 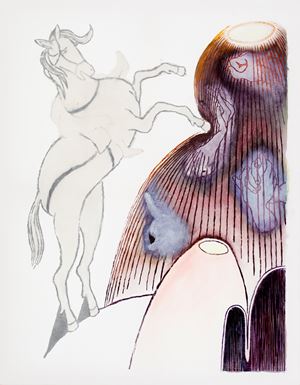 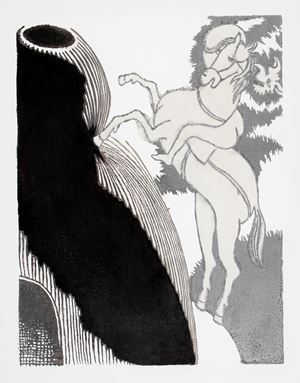 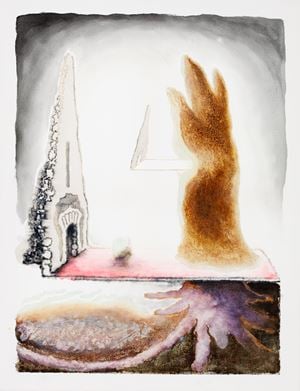 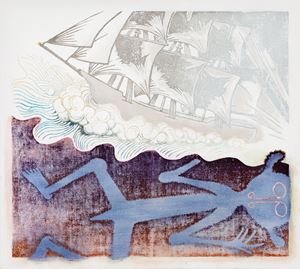 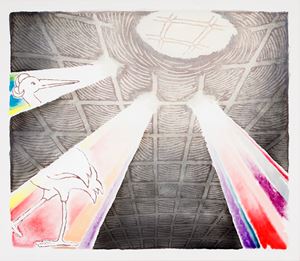 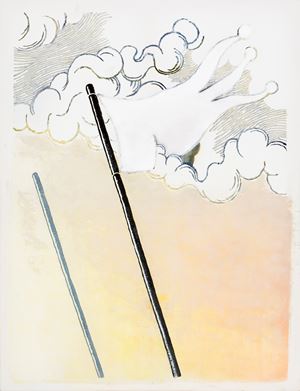 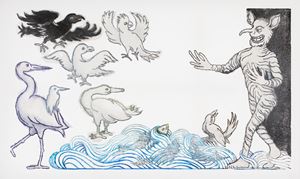 It's an arresting image made more so by the graphic directness of its rendering: a horse and rider rear up against a flat ground; the rider is twisted around the animal's sinewy neck, obscured from the waist up, seemingly naked. Before them looms a conical form, open at the top. It's a dwelling, although the casual viewer could be forgiven for missing this: it's far more bodily than architectural, shaped more by elemental compulsion rather than human design. A flurry of disembodied hands are visible inside. Each of them gesture. One extends an accusatory index figure at the rising horse. Two clasp together in either anguish or prayer. One forms a fist. The last is an open palm, and is placed at the precise point at which the horse's hoof presses into the dwelling's wall: it catches this pressure and holds.

Recently, as Benjamin Armstrong embarked on a new series on stretched polyester, this image, or at least the beginnings of it, was among those that came to mind. He knew it from a thin volume of history that his cousins keep on the shelf of a family house at Cape Otway. It's called Cape Otway: Coast of Secrets, by Bruce Pascoe and Lyn Harwood, and, as its title makes clear, it details the stories of Victoria's southern-most coastal tip: the shipwrecks and colonial massacres, the bush-tucker that supported generations of pre-contact Gadubanud people, the construction of the iconic Cape Otway lighthouse.

In a foreshadowing of his far more famous work Dark Emu, from 2014, Pascoe also writes of the Aboriginal architecture of the region. On the coast, some houses were built of loose pieces of green and yellow sandstone; at the time of Pascoe's writing, their foundations could still occasionally emerge from beneath slow-moving sand-dunes to reveal simple floorplans inlaid with stone. Inland, structures could be more elaborate. Early colonials were known to have encountered Aboriginal homes built of timber and turf in a fashion so substantial that, according to Pascoe, the 'white men liked to ride their horses onto the roofs.' It's in this brief passage - little more than an aside - that Armstrong's horse and rider resides. He casts the image as a kind of icon of colonial encounter, and although in context the act it depicts might readily be understood as one of destruction and violence, Armstrong imbues it with an undeniable sense of resilience and grace: the building's wall gives inward under the horse's weight, but it doesn't collapse.

Armstrong's recent work all deals with images in this way. Although often drawn from a reading, however oblique, of the historical record, they are far from illustrative. History of the kind that Pascoe has recently become widely known for - a re-reading of the available historical archive as a means to prosecute our current understanding of the world - underpins them, but so too do carefully deployed literary flourishes. This is history as magical realism. The world evoked by Armstrong is one in which recognisably human presences - a three-masted sailing ship, a rock engraving, a buried skeleton - are most often overshadowed by nature's elemental fluency.

Sunlight beams through a barred ceiling, illuminating spectrums of colour; a white flag is sliced cleanly by a billowing cloud; a ruined chimney stack is met by a termite mound, but where one crumbles the other grows. Birds, meanwhile, take on heraldic significance, as if envoys from secret kingdoms: a cockatoo; a crow, a kingfisher perched atop a heron's back. What they portend is uncertain, but the unifying theme is clear. One readily imagines in their startled effect the disruption of unexpected arrival: a ship looming on a previously empty horizon, a spectre-like figure emerging from a white-capped sea. In this world the pattern of centuries can be upended in a moment.

As has long been the case for Armstrong, much content resides in the new work's materiality, in how it has physically found form. The images on stretched polyester are first carved into lino 'blocks'; they are inked and handprinted; erased, re-carved, over-worked, before the altered image is pressed once more against the first. Over time, certain aspects change: some parts fade from view; others are articulated more clearly. There's also the shimmer of iridescent pigment that Armstrong has made something of a signature over the years but which here finds perhaps its fullest expression. The colour of these works shifts and changes in concert with the viewer's movement. Pull close to this area of apparently dark blue, turn your head ever so slightly to the side and look across the surface at an angle, and it suddenly erupts into golds and oranges: something indistinct is revealed as if a cloud has unexpectedly passed across the sun and what was in shadow is now cast in stark light.

Much of this will be familiar to long-term viewers of Armstrong's work, but the resulting images nonetheless mark a continuing shift. This writer would date it to a series shown at Tolarno Galleries in 2018, Invisible Stories: Meditations on Port Essington, which responded in detail to a chapter from historian Mark McKenna's 2016 book From The Edge. That work displayed a newfound commitment to overt narrative that continues here. The images still carry the universal aspect that characterised earlier bodies of work, but Armstrong now sees them as far more Australian in character, or perhaps, to make it clearer still, as directly concerning the Australian character.

This is not the quasi-mythical construction embodied by notions of 'mateship' and a 'fair go', but the more foundational character imparted upon us by this country's history, by the shockwaves of colonisation, by the ruins and traces that carry through all of us unbeknownst or not. As the historian Billy Griffiths would have it, the landscape is like this too. It is a place traced by 'the cryptic residue of former worlds': it's through this presence that such worlds might be glimpsed, if not fully understood, from our current vantage point.

So it is for Armstrong: his images revel in the slippages of process as a means to lay bare the limitations and possibilities of historical imagining. Take his mounted horse: it rises up over the domed building, we see the image clearly, but also sense it is one arrived at through erasure as much as anything. In a shifting landscape, vantage points are always subject to change: the view can only ever be piecemeal and incomplete. The many absences speak of historical blindspots, of events either forgotten or ignored, of selective narratives that are deployed as foundational myth.

But herein also lies an opportunity: in the gaps and omissions new stories wait to be written.

Quentin Sprague is a writer and curator, and author of The Stranger Artist.

Under the Southern Sky

Online Only
Benjamin Armstrong in the studio, in front of White Flag I. Photograph by Andrew Curtis, May 2020. Courtesy Tolarno Galleries.
Selected Works Press Release

Sign up to be among the first to know when new exhibitions by Benjamin Armstrong or at Tolarno Galleries open.