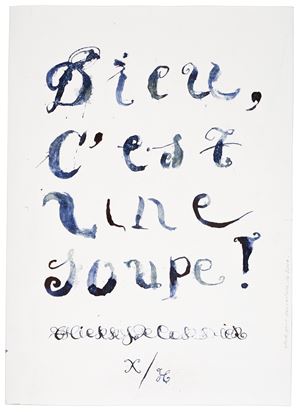 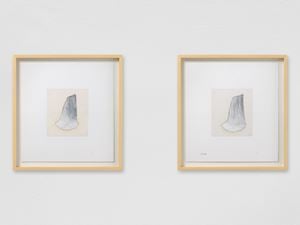 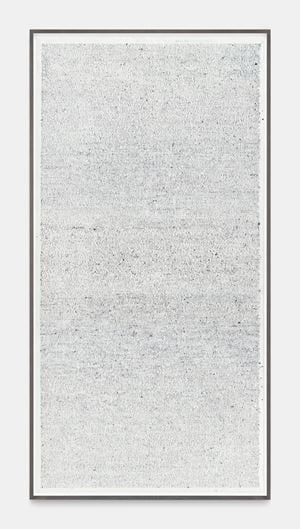 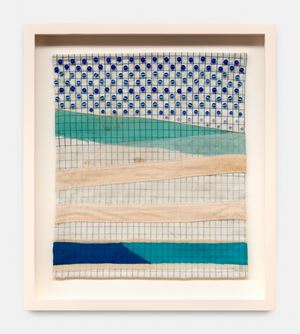 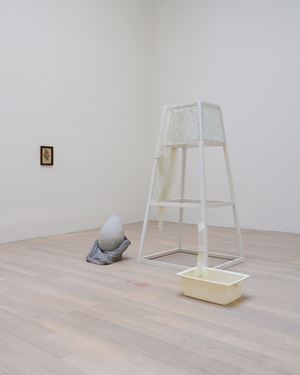 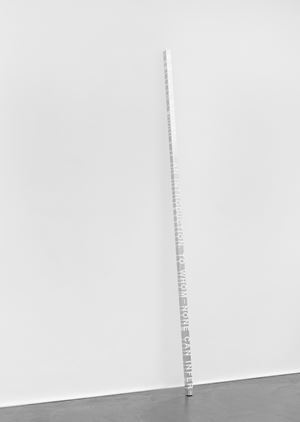 Xavier Hufkens launches the exhibition programme for 2020 with a group show featuring works by some of the gallery's celebrated artists. The title, Winterreise (Winter Journey), is inspired by Franz Schubert's song cycle of the same name, a collection of poems set to music. In a similar vein, the gallery presents a selection of sculptures, paintings and drawings that touch upon the themes of winter, such as solitude, stillness and a sense of enclosure.

An amorphous sculpture that has been stitched together from scraps of fabric sits within an antique display case: a soft, semi-human mass of forms with accents of powder pink and baby blue, the colours associated with newborn babies. Entitled Child Devoured by Kisses (1999), this late work by Louise Bourgeois (1911–2010) conjures up a wealth of art-historical antecedents, such as Francisco Goya's Saturn Devouring His Son (1821–1823): a startling depiction of Chronos (Romanised to Saturn in the title) who, according to Greek mythology, ate his children at birth to prevent them usurping his power. Similarly, the contours of the work evoke the lamb in Francisco de Zurbarán's Agnus Dei (1635–1640). The sculpture's materiality is a legacy of the artist's childhood: Bourgeois was born into a family of tapestry restorers and some of her earliest recollections are of her mother sewing and mending. In this sculpture, Bourgeois touches upon the complicated memories of her own youth while also evoking the paradoxical horror of being literally consumed by parental affection.

A contemporary of Louise Bourgeois, Alice Neel (1900–1984) is widely recognised as one of America's most important twentieth-century portraitists. Like the latter, she was also fascinated by the female body, maternity and childbirth and explored these themes in visceral self-portraits and depictions of pregnant women, children, family groups and domestic scenes. The intimate nature of Bathing in a Furnished Room (1927) is typical of Neel's realistic approach to day-to-day life and a rare survival from her earliest years: the artist lost most of her work from the 1920s when her former partner destroyed the contents of her studio in 1934. The two oils, Young Boy (1941) and Irene (1947), are later in date but executed in the same dark and earthy colours that characterise the beginning of her career.

Domesticity, motherhood and the female experience are also explored by Cathy Wilkes (b. 1966). The artist is known for her meticulously composed tableaux incorporating found objects, textiles, sculpted elements and two-dimensional works, such as the salvaged print on the wall. In Untitled (2019), which was created for last year's Venice Biennale, Wilkes nestles a swollen belly within a cloth-covered form that resembles a baby's car seat. An isolated hand rests upon a plastic washing-up bowl. Looming above is a white tower with two contrasting additions: a tactile scrap of opaque fabric and a brittle panel of embossed glass. Wilkes' sculpture is akin to an associative visual poem that hints at invisible states, emotions and relationships, yet is wholly open to interpretation.

Roni Horn (b. 1955) uses a radically different language—that of minimalism—to create works that are austere but no less poetic. White Dickinson, A BLOSSOM PERHAPS IS AN INTRODUCTION, TO WHOM, NONE CAN INFER (2006–2007) is one of a series of sculptures featuring extracts from the letters of the nineteenth-century American poet, Emily Dickinson. Horn is drawn to the 'heightened sensibility' of her prose and lends it solid form by embedding the words in aluminium. Propped against the wall, the text is legible from the front and back but reduced to lines when approached side-on. Untitled ('But the boomerang that returns is not the same one I threw.') (2013–2017) belongs to a corpus of cast glass sculptures that are linked by the inclusion of literary quotes in their titles, in this case a line from Sputnik Sweetheart by Haruki Murakami. Resembling an ever-changing pool of water, this sensory work fluctuates with the light: at times appearing opaque, at others translucent. It is both textured (where the sides touched the mould) as well as highly reflective (where the glass was only exposed to the air during casting). By giving transient states a solid yet mutable form, Horn suggests that nothing is ever truly fixed. As she has stated in the past: 'It isn't two things. It's everything. It's synthesis; not this and that. It's a state of integration.'

Words—and their absence—have a fundamental presence in Thierry De Cordier's (b. 1954) 'Iconotextures' series: a recent group of panels filled with swathes of dark blue calligraphy that ultimately give way to a tabula rasa, a void, absolute emptiness. The text works are composed of illogical definitions of God. Oscillating between the absurd and the sacred, the words become the spiritual medium of an image that strives to materialise the invisible. The large white works are ultimately empty surfaces that form, as it were, a diptych, suggesting the end of the series. When the words disappear altogether, De Cordier is expressing the futility of attempting to define God, saying: 'Rien, ou presque... Dieu c'est absolument rien, mais en très grand!'

Be among the first to know when new artworks and exhibitions at Xavier Hufkens are added to Ocula.