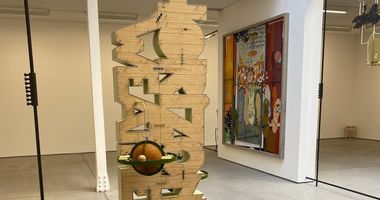 Turner Prize winner Helen Marten is a conceptually aligned artist based in London. Fond of drawing organising diagrams that embrace visual riddles, her rebus-like installations start their production with these and favourite sentences selected from inspiring literature.

Complex with many interconnected components, the work presents an exuberant love of logjammed language, layered allusion, and intricate materiality.

Raised in Macclesfield, a working class post-industrial town just south of Manchester, Marten's father was a travelling pharmaceutical developer who encouraged collecting in his children, and her mother a scientist. Marten went to Central St. Martins, London in 2004 and then to the Ruskin School of Drawing and Fine Art at the University of Oxford between 2005 and 2008.

Marten's sprawling but compelling projects delight in evading tidy meaning, being meticulously structured like the syntactical components of a sentence with an apparent logic that then furtively slips away.

With fragments that jump from medium to medium, they are poetic, theatrical, visually rich, self-reflexive, convoluted, and maddeningly layered. Seductive but also exasperating is the realisation that you can only scratch the densely overloaded surface. See for instance, Census (2018), The Lemon (2016), and Fixed Sky Situation (2019).

Marten's clusters of beguiling, finely crafted, and carefully juxtaposed obliquely suggestive items—on walls, the floor, or suspended high—are interspersed with tiny texts or quotes rendered in sculpted cursive script that bombard the visitor with potential entries to meaning—conceptual pathways that invariably dissolve. Although digital methods of production, such as three-dimensional printing or 'collage' image collating, are used, they are not the point. She thinks her thinking shows more of an analogue sensibility.

Although the presentation has a lot of the anarchic unpredictability of innovative sculptors like Jessica Stockholder, Isa Genzken, or Rachel Harrison, Marten clearly also loves large paintings, conventional illustration, kids' books, toys, and recontextualised or reassembled language. Though highly eclectic, she seems to fit into an English tradition that includes Lewis Carroll, Laurence Sterne, and R.B. Kitaj—with a keen leaning towards generative text.

Marten's installations may be baffling but they are not confrontational. They have a sweetness that invites the viewer to attempt to decipher, to investigate the different scales, codes, games, and verbal layerings. They are not antagonistic or patrician, but engaging through their open playfulness, seeking to create pleasure by the encouraging the investigation of elements section by section, but avoiding any simple cohesive overview. Examples include 1094 bones (2018), Exfoliating curve lines (total cushioning) (2014), Part offering (hit the mahogany) (2014), and Alive at five (2012).

Helen Marten has been the recipient of multiple awards and scholarships, including the Turner Prize (2016), the Hepworth Prize for Sculpture (2016), the LUMA Prize (2012), the Prix Lafayette (2011), and the Boise Travel Scholarship (2009).

In 2020, Marten published her debut novel, The Boiled In Between.

Helen Marten has been the subject of both solo and group exhibitions in leading commercial galleries and also institutions.

View All (8)
Related Press How Important is Art as a Form of Protest? 3 April 2017, Frieze

Given the current political climate, we here at frieze have been reflecting on the role of art in responding to conflict. With this in mind, we invited a cross-section of artists, curators and writers

Two hypothetical bodily abstracts Painterly scenario number 1: Spooning out your orbitals with a palette knife and slathering the provoked blackness of unseeing onto ca

Helen Marten, a multimedia artist who makes puzzling, whimsical installations out of everyday materials, won the Turner Prize, Britain’s top award for contemporary art, on Monday night. The prize comes with a cash award of 25,000 pounds, or about $31,800. It was given at a ceremony here that was broadcast by the BBC

Be among the first to know when new artworks and exhibitions by Helen Marten are added to Ocula.
Sign Up Login