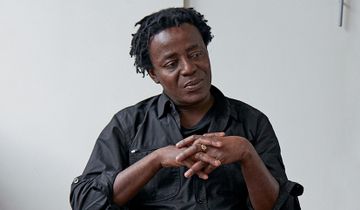 John Akomfrah CBE is a Ghana-born pioneering filmmaker and artist based in London. He is internationally known for his collaboratively produced films and multi-screen video installations exploring memory, temporality, colonialism and post-colonialism, and experiences of global diaspora.

Akomfrah emerged on the filmmaking scene in London as a co-founder of Black Audio Film Collective in 1982. His compatriots in this endeavour were the artists Lina Gopaul and David Lawson, with whom he also founded Smoking Dog Films (established in 1998).

Akomfrah developed this approach in multiple experimental films responding to mounting social unrest in Britain through the 1980s. Such John Akomfrah films draw upon the influence of filmmakers like Chris Marker, Theodoros Angelopoulos, and Jean-Luc Godard, as well as thinkers such as British-Jamaican sociologist Stuart Hall. The Unfinished Conversation (2012) focused especially on the life and cultural theories of the latter.

Atmospheric and highly reflective in their execution, John Akomfrah's movies examine personal and collective memories, and establish dialogues between disparate images and narratives throughout history. In conversation with Ocula Magazine in 2018, Akomfrah explained, 'I try to persuade things to move into other spaces in which they can acquire a new garment of identity.'

In John Akomfrah's Vertigo Sea (2015), the artist brought together archival material, classical literature, and new footage. The three-screen installation also contrasted cruel and disturbing scenes from the whaling industry with different generations of migrants embarking on epic ocean crossings to find a better future. The Airport (2016) also brought together different eras and generations together in dialogue through its characters.

Environmental concerns have been a recurring motif in much of Akomfrah's work. This can be seen in the six-channel video installation Purple (2017)—one of Akomfrah's largest works of that decade—and Four Nocturnes (2019), which both examine broader themes relating to humanity's destruction of the natural world.

A filmmaker with a significant following, John Akomfrah's films have featured in several major international film festivals and awards. In 2017 he was awarded the Artes Mundi 7 Prize. Akomfrah's art can also be found in major institutional collections, such as those of Tate, London; Centre Pompidou, Paris; The Museum of Modern Art, New York; National Gallery of Canada, Ottowa; and the Solomon R. Guggenheim Museum, New York.

In Cleveland, the second, pandemic-inflected edition of FRONT International asks: can art can help us heal?

More than 150 artists will present work when the Emirati exhibition takes place for the 15th time.

Read More Related Press John Akomfrah Commemorates the Colonial Soldiers Who Fought for a Cause that Was Not Theirs 22 January 2019, Frieze

In the opening image of John Akomfrah's Mimesis: African Soldier (2018), we are confronted by a row of black and brown faces who smile nervously and knowingly into the camera. They represent the fac

When he was four years old, artist and filmmaker John Akomfrah came to London from Ghana with his parents. Because of their anti-colonial activism — they worked with Kwame Nkrumah, who became the coun

Sign up to be notified when new artworks and exhibitions by John Akomfrah are added to Ocula.
Sign Up Login