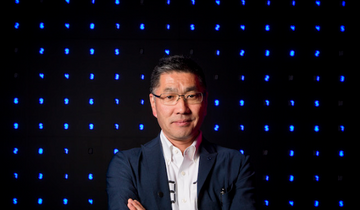 Tatsuo Miyajima began to create light-based works using multiple small LED counters or 'gadgets' in the late 1980s after completing an MA at Tokyo University of the Arts in 1986 and following an early foray into performance art. Since then these counters have become a consistent staple of his work and continually flash through different digital numerals.

Across painting, installation, sculpture, drawing, performance, and video, Tatsuo Miyajima's work is united by an obsession with the digital numerals that are seen in calculators and radio clocks. As the artist explained in his conversation with Ocula Magazine, he is philosophically interested in the 'quantum leap' that occurs when a digital clock ticks over. It is not 'clock time' that interests him but something more personal: 'the sort of time that changes due to our consciousness and awareness.'

Flashing, though not always sequentially, through numbers one through nine, the LED counters in Miyajima's light installations evoke not hours but stages in the journey of life. Instead of displaying '0', the counter goes dark to represent a death-like pause before repeating the cycle—an allusion to Buddhist philosophies of life, death, and eternity.

Each counter represents the essence of life, and consequently each follows a different rhythm and speed. In Tatsuo Miyajima's Sea of Time'98 (1998) installation in the 200-year-old Kadoya House, 125 local residents were invited to set the speeds of each counter, while in Arrow of Time (Unfinished Life) (2016), the artist set alternating speeds himself to convey the lives of people of different races, religions, languages, skin colours, and cultures.

Through the same cycles of illumination and darkness, Tatsuo Miyajima has been able to convey some of the horrors of the 20th century. In his Mega Death (1999), the lights go out simultaneously, conveying the sudden disruption of the natural symphony of life cycles when many are abruptly cut short. Such ideas of temporality and connection across time that the LED works explore also reflect the artist's three-part mantra of 'Keep Changing', Connect with Everything', and 'Continue Forever.'

Beyond the LED counters and projections, Tatsuo Miyajima's more analogue artworks include 'Counter Paintings', which are made on everything from canvas to items of clothing, and performance-based projects like Counter Skin (2007–2008), which involved members of the public painting numbers on each other's bodies.

Tatsuo Miyajima's art has been shown internationally at group and solo gallery shows, biennials, and art fairs across the globe. His work can be found in major public collections such as Tate, London; National Gallery of Canada, Ottawa; Taipei Fine Arts Museum; National Museum of Modern Art, Kyoto; and the San Francisco Museum of Modern Art.

View All (5)
Ocula Photolog The Magnificent Seven Art Sites: Benesse Naoshima Part of a series focusing on the world's best art sites, this Photolog features images from Benesse Art Site on the small islands of Naoshima, Teshima and Inujima in Japan. It brings together contemporary art and architecture in resonance with the pristine nature of the Seto Inland Sea region. Throughout the islands, artworks are exhibited inside...

Read More Ocula Conversation Tatsuo Miyajima By Stella Rosa McDonald, Sydney What is interesting to me is what's behind technology and the philosophical aspects of that.