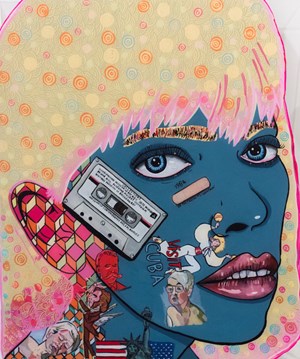 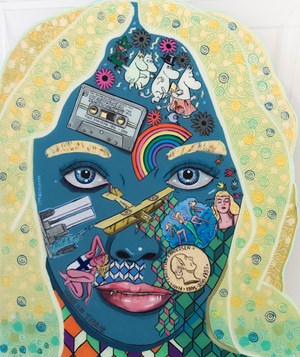 Sam Mitchell's new exhibition is a celebration of female creativity and achievement. The exhibition comprises eight portraits of famous women artists and writers from around the world. These are classic Mitchell portraits 'from the inside out' painted in her signature reverse perspex style.

While Mitchell has previously painted portraits, this exhibition represents a new foray into historical biographical portraiture in her distinctive style, and a move away from her previously predominantly fictional characters. In titling the show Endlings - a term taken from nature, referring to the last known individual of a species - Mitchell highlights the women's uniqueness.

In this body of work all the portraits are contained in open-backed perspex boxes which adds a three-dimensionality to the portrait and depth to the super flat surface of the perspex - reinforcing the tension between the veneer of the outer character and her biography and inner life.

Every one of these never-literal portraits contains a cassette tape which provides a historical positioning on the women's lives in the 20th century analogue, pre-digital era and a deliberate punning and playing with ideas about the recording of history.

Mitchell has a Bachelor of Fine Arts from the Elam School of Fine Arts at the University of Auckland and has been exhibiting steadily for 20 years. In 2010 she was the Paramount winner of the Wallace Trust Art Award, which led to her spending six months in New York in 2011 on a residency at the New York's International Studio & Curatorial Program. In 2014 she won the William Hodges Southland Trust Residency in Invercargill and in 2015, the Sarjeant Gallery Tylee Cottage artist residency in Wanganui.

Sign up to be among the first to know when new exhibitions by Sam Mitchell or at Bartley & Company Art open.