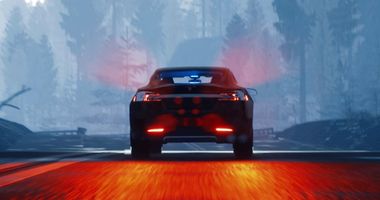 Born in 1982 in Frankfurt am Main, Lawrence Lek is a simulation artist based in London whose digital environments, installations and performances invite viewers to consider the impact of technology on reality. These environments—which are often based on real places—are informed by Lek's education, as a graduate of architecture from Trinity College, University of Cambridge and later the Architectural Association London, and The Cooper Union, New York.

In 2014, Lek was commissioned to create the video installation Sky Line (2014) for Art Licks Weekend in London. Incorporating two real-time simulations with game controllers along with a looping video work, the interactive installation was modelled on London Underground's Circle Line, which he presented as a railway connecting 20 independent art spaces located in inaccessible areas of the city. The work is part of Lek's series 'Bonus Levels' (2013-ongoing), a 'virtual novel' of a 'utopian world-in-progress' composed of computer-generated simulations of urban landscapes. In the case of Sky Line, Lek offers a critique of the lack of infrastructure for certain arts spaces in London, hereby offering his vision of a unified network.

In his 2016 work Sinofuturism (1839–2046 AD), Lek offers a video essay that pushes the perception of different narratives of China. As the artist states, China is perceived from the outside as 'exotic, strange, bizarre, kitsch, tacky, or cheap', but in domestic media is portrayed as 'heroic, stable, historic, grand, and unified.' In this work, Lek pushes these skewed perceptions, and offers a virtual commentary on the status of Artificial Intelligence in China. In a 2018 Ocula Conversation with Stephanie Bailey, Lek explains the core concepts of this work, noting that 'the failure of Sinofuturism stems from its the acknowledgement that the humanism conditioned by the Western enlightenment leads to certain kinds of failures, because that kind of idealism is not possible in all contexts—especially when there are different demographics or different histories being dealt with.'

In 2018, Lek staged the exhibition 2065 at K11 Chi Art Space in Tsim Sha Tsui in Hong Kong. Presented as a gaming parlour, 2065 incorporated playable simulations with CGI videos based on Singapore in the centennial year of its independence—envisaged as a world where life has become completely managed by algorithms managed by a corporation known as FarSight.

Lek's work was included in the 57th Venice Biennale's Hyperpavilion, a large-scale exhibition at the Biennale that questioned the impacts of the virtual on art. Another large-scale exhibition of the same year, The New Normal at UCCA, Beijing presented Sinofuturism, alongside works by 23 other artists from China and beyond, offering as a whole a commentary on 'China's evolving national condition vis-à-vis the rising backlash against globalisation'. Other participations include Glasgow International, Tramway, in Glasgow (2016) and SeMA Biennale Mediacity Seoul (2016), held at Seoul Museum of Art. In 2017, Lek received the Jerwood/FVU Award, and in 2015 the Dazed Emerging Artist Award along with the Tenderflix/Tenderpixel Artist Video Award.

Lek's winning work is a conversation between the AI that handles surveillance in Sim Beijing, a city abandoned by humanity, and itself.

With AIDOL, Lek explores the importation of algorithmic automation into the products of the culture industry. Steering us through a CGI landscape of monumental Chinese temples, retro-futuristic huma

... One of these early arrivals is arebyte, a non-profit exhibition space, which moved in October last year from Hackney Wick. Right now it’s showing Nøtel, a collaborative work by architect-turned-

In the belly of Hong Kong’s mass-transit railway system, along the underground walkway connecting the East Tsim Sha Tsui and the Tsim Sha Tsui lines, is Chi K11 Art Space, in the basement of the K11 H

Read More
Related Press A Portrait of the Artist as a Young AI 18 May 2018, Hyperallergic

HONG KONG—Stepping into Future: 2065, one is basked in the pixel glow of a video wall looping the CGI infrastructure of the Frankfurt-born, London-based artist, Lawrence Lek’s first feature length f

Sign up to be notified when new artworks and exhibitions by Lawrence Lek are added to Ocula.
Sign Up Login