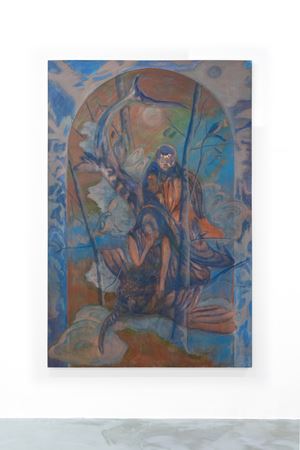 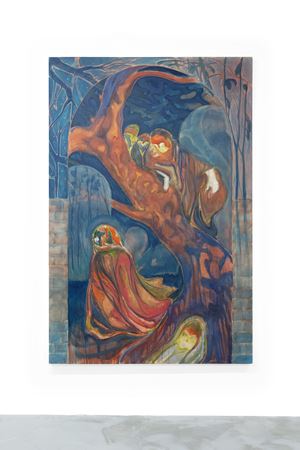 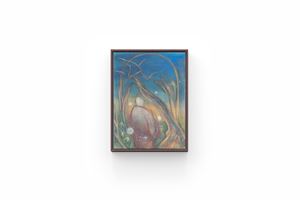 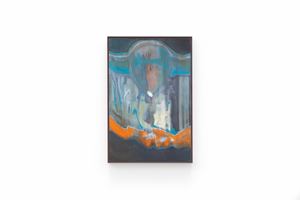 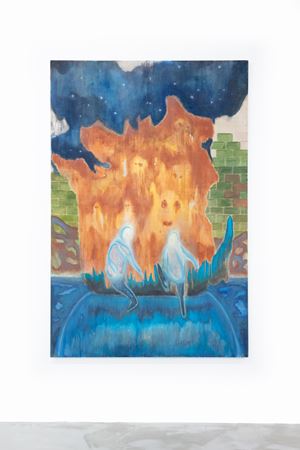 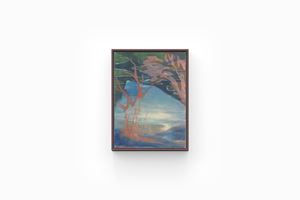 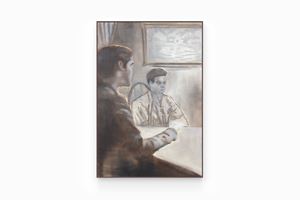 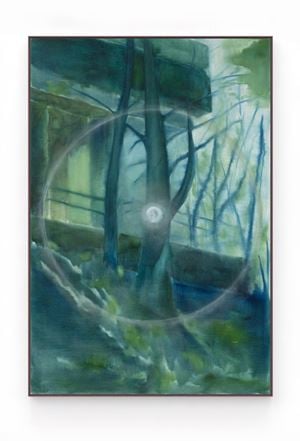 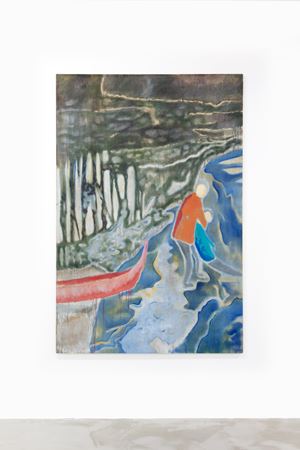 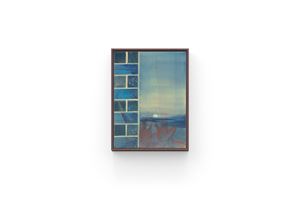 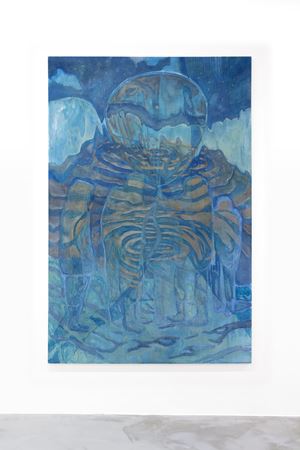 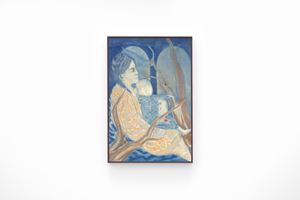 Empty Gallery is pleased to present Vortices, our first solo exhibition with Hong Kong-based painter Henry Shum. Drawing its title from an anachronistic term for 'vortex' once employed by William Blake and Descartes to describe the spiral-like structure of the cosmos, Vortices assembles a thematically interconnected group of recent oil paintings along with a single wall mural. Shum locates his source materials within the tides of mediated imagery which daily engulf our consciousness, transmuting these eclectic images into paintings which seem to pulse with an oneiric energy. Rendered in undulating lines and diaphanous washes, these haunting compositions (whose fugitive motifs are mirrored and inverted across the show) depict otherworldly scenes which are at once distant and familiar – tenebrous spaces of late-capitalist dream.

Recurring throughout the paintings on view, the titular vortice can serve as a kind of conceptual interstice through which we can begin to think Shum's artistic practice. Often mythologised as a site of peril and instability — a kind of zone of negative chance — the figure of the whirlpool has deep roots in the Western psyche, appearing everywhere from Homer to Pound. Defined most simply as a meeting of opposing currents; a spontaneous configuration of swirling fluids around an absent center, it is an elemental structure that has much in common with the self. A spiralling tide which deliriously circulates all manner of cultural debris within its churning orbits, it is destructive and generative in equal measure. For Shum, to paint is first to accept this essential loss of agency, to relinquish a certain intentionality and tenuously circumnavigate this centrifuge of potential images which furnishes the degree zero of a composition.

The works in Vortices harbor deep traces of this aleatoric process, not only on the level of composition or content, but also in their more painterly formal characteristics. One of Shum's most recent paintings, Annunciation (2020), depicts an enormous tree framed within a pseudo-classical archway, its curving trunk and branches bisecting the composition. Clusters of robed figures emerge from the base and sides of this tree, the folds of their drapery rendered in expressively swirling brushstrokes which seem to echo the gnarled form of the wood itself. These contours pulse with a sense of implied movement, an extra-representational vibration which is mirrored elsewhere in works such as Spirit of An Eye (2020) and New Sun (2020). Reaching beyond the mere fusion of subject and landscape depicted in so much romantic painting, this sense of movement seems rather to hint at the defiant agency of pigment and oils; those liquid intelligences which are so often at odds with the intended mastery of the painter's hand. Shum frequently uses dilute washes to delineate large areas of his canvases. In paintings such as Revolution of Night (2020), they steep, drip, and pool on the surface of the work (always conversant with the canvas as material) creating subtly irregular forms which feel liminal and vaporous — abstract dispersions of color which only accidentally happen to resolve into the contour of a cloud or the texture of tree-bark. It is as if these painted marks could detach themselves and circumnavigate the space of the canvas, or regain their former liquidity and flow off their material supports entirely. Material can never be completely reduced to image, movement never completely resolved into fixity and stillness. A stretched canvas is merely a threshold, a dark reservoir in which the vitalised fluids of representation lie temporarily suspended.

This sense of internal movement, of emergent multiplicities latent within a single work is one of the most distinctive characteristics of Shum's practice. If there is often something in one of his paintings which feels unresolved, a symbol or gesture which seems tenuous or peripatetic in relation to the whole, we can perhaps understand this as a sort of constitutional openness — one which implies a different relation to selfhood and artistic agency. This openness takes Shum beyond the hermetic vistas of much contemporary neo-symbolist and neo-romantic painting currently in ascendance. In contrast, his works depict not the reactionary space of personal desire, but rather a formless eddy of pan-subjective merging in which memory and image, history and simulation, and finally, individuality and collectivity collapse into one another. Nowhere is this vision of things clearer than in the titular Vortices (2020), which depicts an anonymous group of silhouettes, gathered together underneath the looming form of a floating balloon. Reusing compositional motifs from earlier paintings, these forms are rendered in outline only; porous and transparent bodies vacated save for the substance of twin whirlpools, whose swirling currents merge into cloudy night sky. In Shum's aesthetic cosmos, brick facades, frescoes, and classical arches simultaneously recall both the faux-euro ornamentation of Hong Kong housing estates and the Renaissance grandeur of Titian, mysterious robed figures are at once Buddhist arhats and Christian saints, the star-filled evening sky alludes not only to art history but to the self-conscious filtering and aestheticising of experience; its reduction to image. The figures in Shum's compositions offer a clue to this condition: with their downcast eyes and languid postures, they suggest nothing so much as the somnambulist. However, this is no longer the exalted state favored by the artists of earlier eras as a means of 'transcending the everyday, but rather the waking sleep of our ceaselessly mediated present. 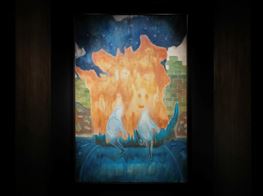 The vortex-as-portal is a recurring motif that conjures the irresistible yet terrifying pull of the unknown. For poet and artist William Blake (1757–1827), it takes on a spiritual dimension as a symbol of transfigurative passage.

Sign up to be among the first to know when new exhibitions by Henry Shum or at Empty Gallery open.